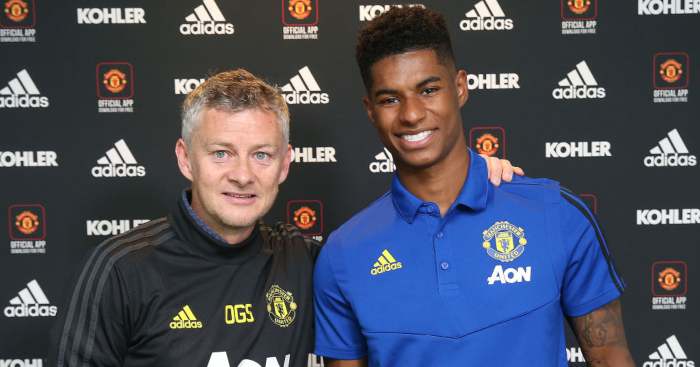 Solskjaer has guided United to five wins out of five in his first pre-season with them, most recently overseeing a 1-0 victory over his hometown club Kristiansund on Tuesday.

Rashford has scored two goals in those warm-up matches so far, and he is confident that Solskjaer has restored United’s self-belief.

“The identity is there,” he said after the win over Kristiansund. “It doesn’t leave, you just have to find it within yourself. We have to come together as a team to show people what we’re capable of.

“Hopefully we can take this momentum into the season. We have to keep improving. We’ve still got a lot of work to do, but we’re improving in training every day and it feels like the team is improving, which is the most important thing.

“We’re concentrating on ourselves and keep trying to take steps forward.”

On a personal level, Rashford – who has mainly been utilised as a centre-forward in Romelu Lukaku’s absence – is reasonably satisfied with his two goals, but insists that he will try to do better in whichever position he plays.

“It’s been okay, but I can still sharpen up a bit more,” said Rashford. “That’s normal, but it’s more about wanting to get the right amount of work load in.

“Fitness has improved and the patterns of play we’ve been working on are starting to come out in the games. That’s the important thing.

“It’s never been my aim to be a No.9. It’s about being able to adapt and play in different positions and to be the ultimate forward.

“I think I can score goals from all positions and I think that’s something that’s shared among the forwards.”

The England striker is one of seven players to share the goals for United so far this pre-season, with the 21-year-old believing the number of different goalscorers can only be a benefit.

“That’s important. If one person is scoring all the goals, you get a different feeling as a team than if all the forwards are contributing. It’s definitely a good feeling and it keeps us all on our toes.”

United take on AC Milan on Saturday in their final friendly, before they host Chelsea for their Premier League opener – a fixture that Rashford is confident the squad will be pumped up for.

“It’s definitely a tough start,” he admitted. “It’s the start of the season and we’re raring to go. Everyone is looking forward to that. We’ve got one more game where we can really put a shift in and we’ll be in good condition when the season starts.”