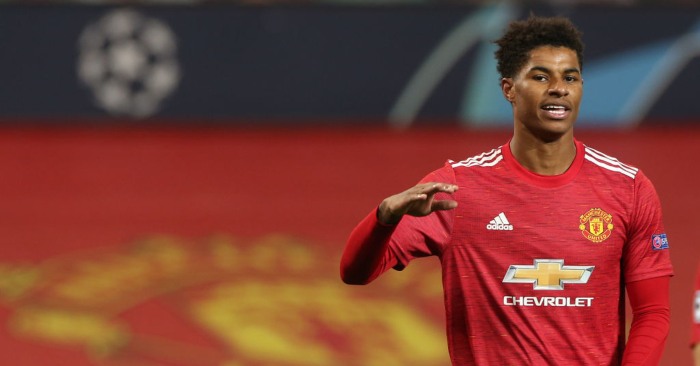 Ole Gunnar Solskjaer knows a thing or two about making an impact off the bench and was full of praise for super-sub Marcus Rashford after his hat-trick in Manchester United’s impressive Champions League thrashing of RB Leipzig.

A week on from firing the Red Devils to victory at Paris St Germain, the 22-year-old – who is leading a remarkable charge against child food poverty – was named on the bench for Wednesday’s Group H game.

Mason Greenwood’s fine first-half strike put United in the driving seat against last season’s semi-finalists Leipzig, but Solskjaer turned to Rashford in the 63rd minute in a bid see off the Bundesliga leaders.

READ: Solskjaer produces his greatest game from embers of his worst

It proved an inspired decision, with the forward’s first effort given the green light by the video assistant referee having initially been ruled offside from fellow substitute Bruno Fernandes’ pass.

Rashford soon netted his second but looked to have been denied a treble when Anthony Martial scored the spot-kick he had won, only for the England international to slam home and complete a 5-0 victory in stoppage time.

“Now is not the time to think about how many goals you’re going to end up with,” Solskjaer said when Paul Scholes’ comment about a potential 25-goal season for Rashford was put to the United boss. He has now scored seven this season.

“As long as you concentrate on the next job in hand, training tomorrow, of course he only played 30 minutes.

“There’s one step at a time, if you get too far ahead of yourself you’re going to lose focus.

“Marcus has showed he can keep focusing on what’s important on and off the pitch at the moment. He did really well today coming off the bench.”

Solskjaer is uniquely placed to talk about the mindset required to net a treble off the bench as the only other player in United’s history to have managed that feat.

“As a sub, coming on, sometimes that’s the best time to come on when your team is winning, there are spaces everywhere and Marcus took his chances incredibly well,” said the Norwegian, who hit four as a substitute at Nottingham Forest as United won 8-1 in February 1999.

“You can see players looking for each other, playing an extra pass now and I was very pleased with the response.

“Everyone knows at times you’ve got to be rested. Players can’t play six or seven games in two weeks. It will be hard.

“Bruno and Marcus playing five in 14 days, that’s quite tough. Football nowadays with intensity you need to recover and that’s why we’ve got a big squad.”

Solskjaer spread his praise across the group following their work against a Leipzig side that made life harder than the scoreline suggested.

“It was a case of using the squad,” Solskjaer said. “We had to rest a few players and the ones who came in did brilliant.

“We had to work hard for this, they really made us work hard off the ball and on the ball as well because they counter pressed. The intensity of their play was incredible.

“After 2-0 of course they open up, go for goals and the spaces opened up for our fresh legs out there.

“It’s very good to know for the players that we have a strong squad to pick from. We are very happy with the start.

“We have played against two very good teams, two difficult games, and we have performed fantastic.