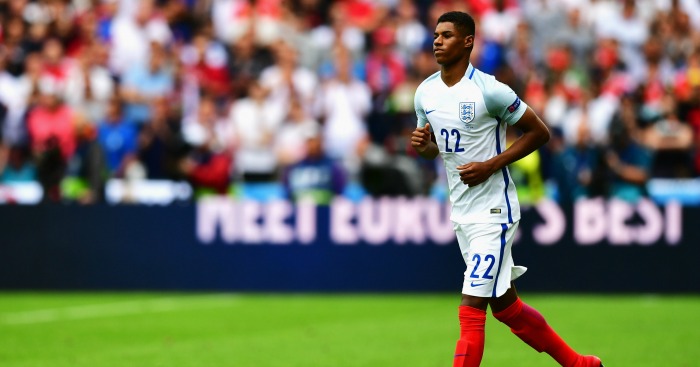 Marcus Rashford has dropped down to England’s under-21 squad after struggling for first-team football at Manchester United this season.

The forward, who made two substitute appearances at Euro 2016 for the senior squad this summer, is in Gareth Southgate’s squad to face Norway next month.

Rashford scored on his full debut against Australia in May but has now dropped down to Southgate’s set-up for their Euro 2017 qualifier in Colchester.

He was considered for the Toulon Tournament – which England won – in the summer but eight goals in 18 games for United propelled him into Roy Hodgson’s senior side.

Southgate said: “Last season, his pathway was remarkable and we’re very conscious of plotting how we develop our young players.

“We spoke a lot with Manchester United last season when we put him in the under-20s in March, which both they and ourselves felt was the right thing at the time.

“He then continued his progress, which was great, and of course he played a part in Roy’s squad at the Euros.

“But if he’s less likely to start with the seniors at this moment in time, and Sam (Allardyce) is quite keen that people are playing regularly, we think that it’s now a good opportunity in his international development for him to be with the under-21s.

“Marcus has a good mentality, so I know he’ll respond in the right way and we’re looking forward to working with him.”

It is Southgate’s first squad since the under-21s won the Toulon Tournament in the summer, the first time in 22 years they had won the competition.

England are top of Group 9, three points ahead of Switzerland, and also host Bosnia-Herzegovina at Walsall’s Banks’s Stadium in October in their final group game after travelling to Kazakhstan.