Home All The News Sancho: Rashford the most skilful I’ve played with

Jadon Sancho says England teammate Marcus Rashford is the most skilful individual he has played with... 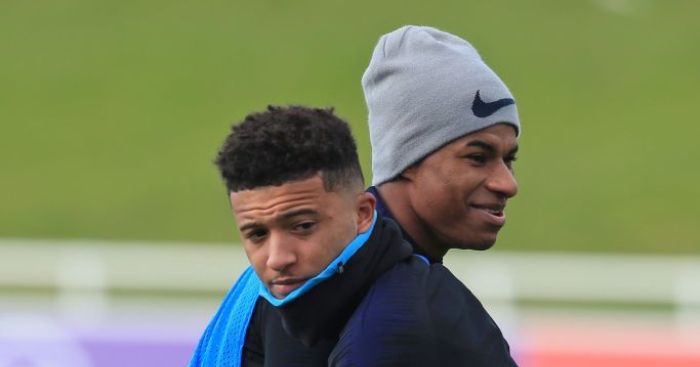 Borrusia Dortmund star Jadon Sancho has named Marcus Rashford as the most skilful teammate he has played with.

Sancho has long been a target for Manchester United. The forward has been their main target all summer, but he is yet to officially sign for the Red Devils.

The winger has impressed massively over recent years in Germany. In his last two Bundesliga seasons, he has provided a remarkable 59 goals and assists from his 66 league outings.

He has also regularly performed well in Europe, as the 20-year-old is now regarded as one of the best young players in the world.

United have been chasing his signature all summer, but the transfer fee appears to be the major stumbling block preventing the deal from happening.

Mirror Sport have reported that they are now willing to offer £75m upfront plus an additional £15m in add-ons for Sancho. But this is still below Dortmund’s valuation of over £100m for the attacker.

Sancho was asked recently on the Chunkz and Yung Filly YouTube channel who is the most skilful player he has ever played with.

“It would have to be Neymar, he is different with it. Played with – Marcus Rashford.

“When I was at City Kevin de Bruyne and David Silva. It would probably be David Silva. He just dictates play.”

Sancho also picked out ex-Dortmund attacker Mario Götze and their current winger Julian Brandt to round up his top five selections.

Rashford and Sancho may have to wait a while before they can play together at Man Utd, though. Dortmund Director Sebastian Kehl insisted earlier this week that the England international will not be sold at a cut-price.

Manchester United’s next game is at Brighton on Saturday. This is after they strolled past Luton Town in the Carabao Cup in midweek.