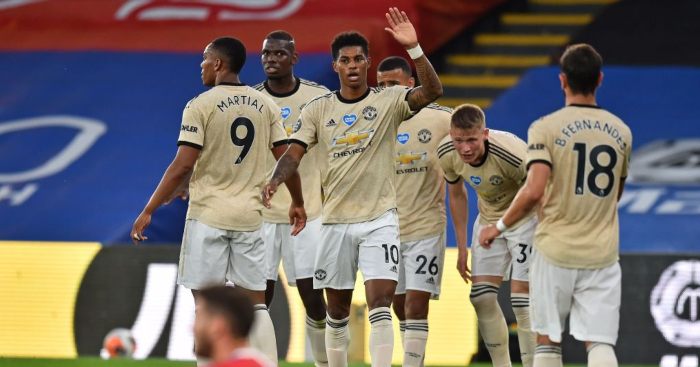 As the pressure of the race for the Champions League ratchets again, United produced the result demanded of them. The performance was heavy-legged and laboured, as all of them now inevitably are, but it was efficient enough to put the points on the board and return the spotlight to Brendan Rodgers’ fragile side.

Ole Gunnar Solskjaer was fortunate. Crystal Palace might have had a penalty in the first half and almost had an equaliser in the second, but this was good enough at a time of the season when nothing else matters.

Since the restart, the Bruno Fernandes-Paul Pogba axis has been the presumed source of United’s rhythm. It’s certainly changed the balance of attributes in their midfield and created a threat which wasn’t previously there, but it’s one of several evolutions in this side. Among those, Marcus Rashford’s wandering role is probably the most interesting.

Perhaps Rashford was a little wasted as a centre-forward. Not because he isn’t a good finisher, but because the role demands only a few abilities from someone who is increasingly showing himself to be broadly talented.

Solskjaer has evidently recognised that. Rashford has been used often as a wide-forward in the past, but there have been significant differences in recent months. His brief is now broader. He doesn’t have a free role, but he’s allowed more license to explore, operating from tight against the left touchline, sometimes infield, and often in the orthodox channel of a No.9. His role, seemingly, is just to plot, scheme and score, and he has the freedom of the north-west corner of the pitch in which to make that happen.

It’s a tweak which involves Fernandes, too. The Portuguese naturally drifts and he appears in all sorts of positions throughout every game. One of the areas he likes to inhabit, though, is that same shallow left area. Just like Rashford, he too frequently receives passes on the touchline. At any given point during a United game, the chances are that one of them will be playing that role, while the other is roving around, searching for weakness.

It’s a fascinating dynamic, because it seems to make them extremely difficult to contain. Shortly before the penalty incident in the first half, Rashford very nearly connected with a raking ball over the top of the Palace defence. Fernandes had run beyond the last man and had he managed to adjust his body position, the pass would have put him through on goal and in position to score.

Those are roles which can obviously be reversed, with Rashford making the run and Fernandes dropping into the pocket. What matters, though – and what seems relevant to United’s growing fluency – is the fluidity between the positions and the challenge their opposition now faces in dealing with a team capable of rotating dangerous players into multiple roles.

For Rashford specifically, this was a game defined by his composure and by his awareness for the movement around him. He really does see the game very well. Quickly and with instinct. In what was overall a drab affair, he still left emblems of his range throughout the night. Fifteen minutes before the end, he made that driving run in support of Anthony Martial, and then pulled the ball back to a position from which Fernandes really should have scored. He hit the post, but Palace had been cut open again and Rashford has been the man they couldn’t contain.

The moment which settled the game for good was the best example of them all. That time it was Fernandes coming in off the touchline, and his pass inside which Rashford redirected into Martial’s stride. As a move, it was all of United’s recent improvements distilled into a few short seconds. The urgency, the angle, the accuracy in the final pass.

And it had Rashford right at its heart. Increasingly, that’s often the case with United’s better moments and its pertinent too that his channel of influence seems to be broadening all the time.

What a difference. Not so long ago, this was a player who many were determined to judge on the basis of his goal volume alone. Unfortunately for Marcus Rashford, that included at least one of his former managers. Now, though, with United’s attacking parts suddenly moving in this new harmony, he looks like both their sharpest edge and their most creative mind. In other words, a complete attacking player.