Home All The News Rashford: Why Man Utd under Jose wouldn’t have beaten Astana 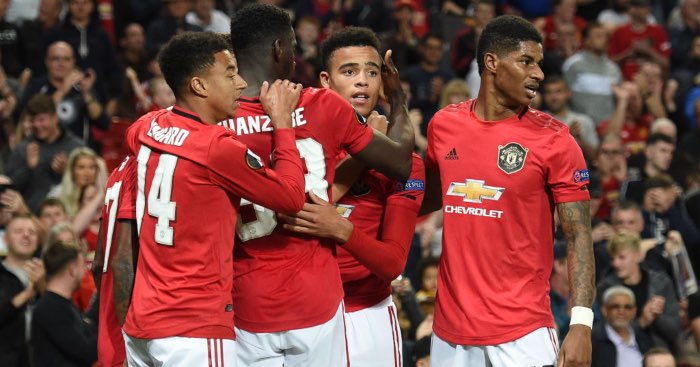 Marcus Rashford is excited for the future thanks to talents like Mason Greenwood and the kind of togetherness lacking at Manchester United two years ago.

Ole Gunnar Solskjaer’s side toiled to victory in what many expected to be a cakewalk against Astana, with a moment of magic from 17-year-old Greenwood required to seal a 1-0 win from Thursday’s Europa League opener.

Victory could not mask some concerning aspects but Rashford was focusing on the positives after United’s victory.

“Not the best performance but it’s great to come off the pitch with a win,” the England international said. “There was a lot of good stuff.

“They were a tough team to break down, but I think it shows… if I look back to two years ago I don’t think the team had maybe the togetherness to come through a game like that.

“Everyone expects it’s going to be an easy game, but the opposition have come to win so it’s always a tough game.”

It was a striking comment from Rashford, whose positivity only increased when talking about Greenwood becoming United’s youngest-ever goalscorer in European competition.

The 21-year-old England international knows all about announcing yourself with a maiden senior goal in a Europa League match at Old Trafford and is excited by the teenager’s potential.

“I am very happy,” Rashford said. “For me, being a person who’s been in his shoes in the past, for him to score that goal I know how he feels.

“And even more importantly, that’s the goal that won us the game, so I think that’s the thing that everybody should be talking about.

“Mason has been doing well since he’s joined the first team and 100 per cent there’s more to come from him, so I’m sure he’s excited and everyone else is excited as well.”

Greenwood was the most impressive of the three teenagers in United’s starting line-up against Astana. Tahith Chong and Angel Gomes showed signs of promise, while the forward scored on his ninth first-team appearance.

“For kids coming through the academy, that doesn’t exist for them because they’ve learned to sort of deal with that (pressure) all the way through their careers.

“Since they’re nine years old, every time they play a game… for other academies Manchester United is the biggest game of their season, so they put everything into that game.

“They’re used to having pressure to win games, so it’s not a surprise to me when the young ones come on and they do well.

“Mason scored today. Angel did very well. Chongy in the first half was very good and in the second half found it a bit more difficult.

“And they keep improving. Since they’ve come up with us, they’re always improving.”

Asked whether he was excited by their potential, Rashford said: “Yeah, 100 per cent.

“So all of us need to keep working hard and they’ll get to where they want to be.”