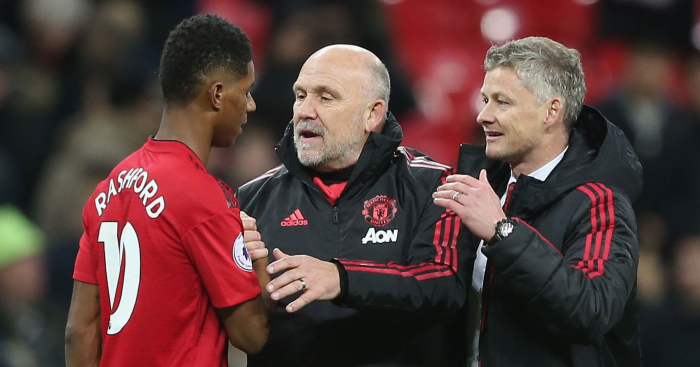 There is a growing sense of mistrust between Ole Gunnar Solskjaer and some of his players, according to a report.

Miguel Delaney writing in The Independent has compiled some of the internal reasons why United’s form has dropped off a cliff recently, with the positivity gleaned from Solskjaer’s initial arrival to replace Jose Mourinho seemingly gone.

Solskjaer has offered something of an olive branch to his players in the wake of their miserable 4-0 defeat at Everton on Sunday, but the dressing room is said to be doubting the recently-appointed manager’s credentials for the top job at Old Trafford.

Some players are questioning Solskjaer’s tactical acumen, which the story quoting one source as saying it is “his biggest problem”.

The mistrust is reciprocated, with Solskjaer reportedly having identified that a number of players are not good enough for United, nor are they fit enough.

Solskjaer took his players to Dubai for what has been labelled a mini-pre-season but it appears not to have done the trick. Some “first-team staff” apparently now feel that the players are not in adequate physical shape to sustain the intense, free-flowing football that characterised Solskjaer’s early weeks in caretaker charge.

Relationships in the dressing room are fracturing amid uncertainty over the future of a number of big names. Paul Pogba is said to be “very keen to leave” the club, while David de Gea is unhappy that his contract demands are not being met.

De Gea is part of Spanish-speaking group which looks set to be dismantled this summer. Ander Herrera, Juan Mata and Antonio Valencia are out of contract while Marcos Rojo and Eric Bailly look set to be shown the door too – providing buyers can be found.

Marcus Rashford is said to be the subject of interest from Barcelona and the academy graduate would consider any firm offer from the Nou Camp, even if United would be aghast to lose the England striker. Rashford’s attitude is also under scrutiny, as Delaney’s story explains: “One team-mate has complained to friends about how Rashford is not quite the humble figure he used to be.”