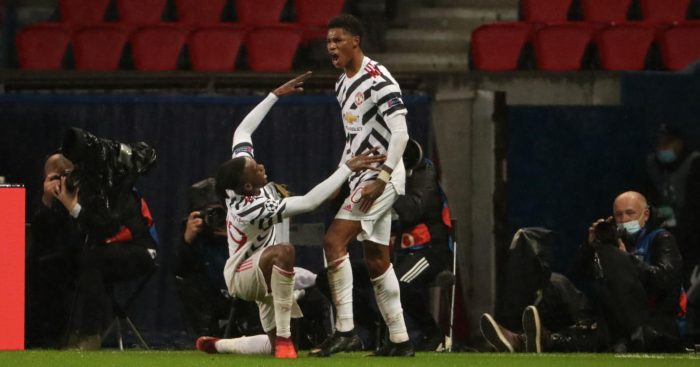 Marcus Rashford thinks Ole Gunnar Solskjaer is deserving of praise after the Man Utd boss got it “spot on” in their victory over Paris Saint-Germain on Tuesday night.

After a season away from European football’s top table, the Red Devils returned to action at the Parc des Princes, where just 19 months ago they secured one of their greatest ever comebacks in the Champions League.

MAILBOX: Solskjaer is a tactical genius and roaring success after all…

“It is definitely a nice feeling,” Rashford told MUTV. “I thought we did well in stages, some of the decision making in the first half and even in the second half was a little bit poor in the final third. That is one thing we can definitely improve on.

“But I think the manager got it spot on today. The system allowed us to express ourselves going forward and also trying to be tight defensively which I think we did as well as we could have.

“It was a big win but also it is the perfect position to be in because we’ve got a lot to build on and improve on as well.”

While Solskjaer returns to the north west with a smile on his face, PSG head coach Thomas Tuchel was left perplexed by his side’s performance.

“We played well before this, with five straight wins,” he said.

“It was a performance without intensity, without aggression, without getting the ball back, without counter-pressing. It was a bit bizarre. I don’t know why.

“It’s clear we can improve and we must. We’re not happy with the performance but now is not the moment to be too critical in public. We’ll do that behind closed doors.”