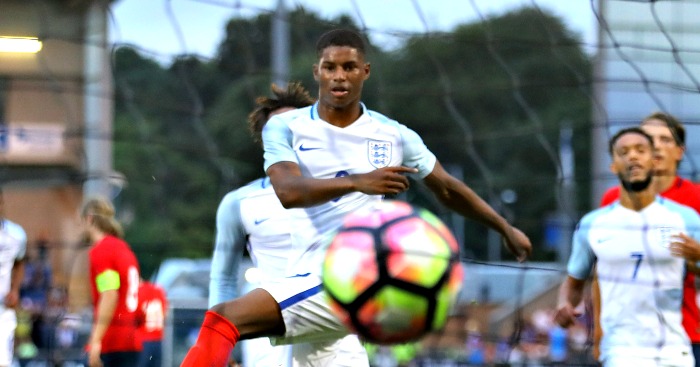 Marcus Rashford grabbed a dream hat-trick on his England Under-21 debut as Gareth Southgate’s side moved a step closer to Euro 2017.

Rashford was again the star as he opened the scoring before completing his treble in the second half with a fine strike and a well-taken penalty.

Nathaniel Chalobah, Ruben Loftus-Cheek and Lewis Baker also scored to put England on course to reach next year’s tournament in Poland despite Ghayas Zahid’s consolation. They go to Kazakhstan and then host Bosnia in October in their final games.

Manchester United striker Rashford scored on his senior debut against Australia four months ago and completed his own personal double on his Under-21 bow in Colchester.

It was a timely impact after Southgate’s men relied on goalkeeper Angus Gunn to keep them level before Rashford, who was full of application and enthusiasm, broke the deadlock.

Manchester City keeper Gunn was forced into two smart early saves by Mohamed Elyounoussi and then produced an even better reaction save to stop Iver Fossum’s header making it 1-0 after 17 minutes.

Aside from two off-target headers from Nathan Redmond the hosts failed to seriously threaten with Rashford struggling to make an immediate impact.

The striker had been left on the peripheries but burst into action after 29 minutes to open the scoring when he latched onto Chalobah’s pass down the left.

Rashford raced into the area and drilled across Sondre Rossbach to settle the hosts after a slow start.

Much-hyped Real Madrid midfielder Martin Odegaard was anonymous for Norway as England took control and Kortney Hause had a goal disallowed when he headed in Ward Prowse’s corner, which had drifted out, just after the break.

Rashford was denied by Rossbach after a sweeping move from Redmond and Loftus-Cheek before the Chelsea midfielder sparked a goal rush.

He made it 3-0 after 64 minutes when he swept in off the post before Rashford bagged his second a minute later as England threatened to run riot when he curled into the top corner.

Zahid headed a consolation and Rashford then completed his treble from the spot when Thomas Grogaard handled in the area to cap a run of four goals in seven minutes.

Redmond thumped the post and Baker wrapped up the rout with four minutes left when he steered in Ward-Prowse’s corner.