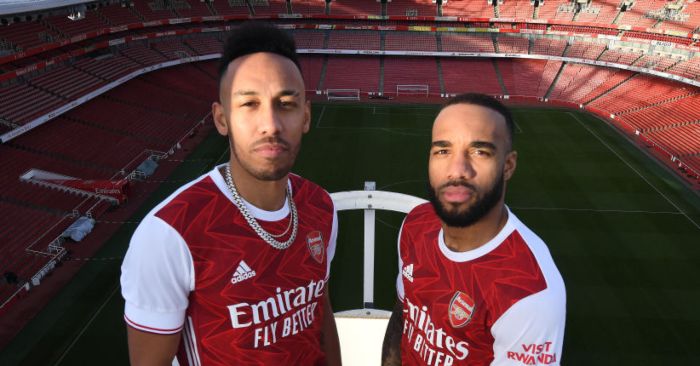 This is only for confirmed kits; we’ve still just about got enough dignity not to debase ourselves chatting about leaked or, worse, concept kits. We’re adults, for goodness sake. Please do remember that this sort of thing is inevitably a game of opinions, but also keep in your mind that the below opinions are the correct ones. Damn Liverpool

The new home kit from adidas x The Arsenal

Had easily the best home shirt of the 2019/20 season, which as we all know is the real quiz. The 20/21 model, like the team itself, comes frustratingly close to being good but isn’t quite. The pattern: good. The adidas stripes down the flank: good. The chunky trimmed cuffs: good. The collar: the collar is bad. There’s nothing necessarily wrong with a round neck on a football shirt, it’s just that it’s always going to be worse than a v-neck so why bother? And this one also just looks like an afterthought. They put all the time into some really excellent flourishes and extravagant details but forgot all about something utterly integral that ultimately causes the whole thing to fall just short. Arsenal, that.

Lovely pinstripes. Proper contrast shoulders that go all the way to collar. Nice rounded v-neck. Very, very decent and – most importantly – a clear winner of the claret-and-blue-off against West Ham.

Brighton
More pinstripes, which is always to be encouraged. There’s a ’90s retro vibe here, which is generally good, but this one manages to land at the low-rent end. It’s a Ribero, Auto Windscreens Shield kind of flavour.

So a new adventure begins. Couldn’t be more excited… a club with ambition and hunger to match my own.

Delighted and proud to be joining the @OfficialBHAFC family. Can’t wait to get started! #BHAFC 🔵⚪️ pic.twitter.com/w9Zk0RvwyS

Chelsea
To their huge credit, Chelsea have been very consistent about just having nice blue kits for pretty much the whole of the last 20 years (compare and contrast with Spurs). Until the last two; then they went for the weird stain-concealing provincial bus-seat upholstery aesthetic that Manchester United have saddled themselves with this year and then went for a pattern that didn’t quite work. It’s a return to form for the Blues this year with a lovely clean kit. Even the round collar that fails so miserably on Arsenal’s kit works here in the darker palette.

Introducing our new @nikefootball 20/21 home kit, and shirt partner @ThreeUK! The herringbone-knit pattern is inspired by the traditional craft of London tailoring.

Only downsides here are the already established fate-tempting banter potential of that sponsor, and the inevitable insistence on pretending that the kit is inspired and influenced by some bumwhiff or other. In this case, “the traditional craft of London tailoring”.

Crystal Palace
Very decent indeed. The arrowhead design works well despite – or maybe because of? – the faint Dad’s Army vibes it’s giving off. Three kits off the same template can look lazy but works well here, and this is that rarest of kits where the sponsor’s logo feels like an actual part of the shirt rather than the financially necessary imposition that it actually is. Most importantly, Palace’s home kit is better than the Chelsea third kit that rips them off. It would be pretty embarrassing were that not the case.

Everton
Sure, Liverpool won the title in absurdly dominant fashion while Everton had another year of instantly forgettable mid-table bleurgh. However, Everton have also signed a kit deal with hummel so who really had the better year? Still Liverpool tbh, but it’s definitely much closer than it was.

Just a lovely kit from the best in the game. The understated bit of business on the round collar effortlessly elevates it above the drab, lazy Arsenal effort. If we’re being hyper-critical, is it just a tiny, teensy bit too Rangers?

Leicester
More of those very wide adidas cuffs on the sleeves here. We’re big fans and these might be the league’s best thanks to that gold band around the middle. Are we happy with that collar, though? No, we are not.

Liverpool
Really, really annoying. Having the best team in the league and the best shirt is very bad form. A lovely clean kit and not saddled with Nike’s current fondness for bland round collars. Lovely V. And the green is a cracking nod to the iconic adidas Liverpool kits of the mid-90s.

This kit, much like the team that will wear it, really cannot be faulted. Retro feel yet also undeniably modern and a flawless colour palette. It’s just not fair.

Manchester City
City are the absolute masters of kits “inspired by” and “influenced by” stuff in Manchester, a transparent attempt even now as a fully paid-up member of football’s uber-rich elite to position themselves as Manchester’s club in opposition to the global behemoth of United. This year, City have taken the bold and undeniably risky step of basing their kit on the tabloid back-page cracked badge that must by law accompany any story about a CRISIS CLUB. If City have a flawless season, then all will be well. But if anything goes wrong…

All that being said, and while acknowledging that the bold design is inevitably going to be an opinion-divider, our verdict is: quite nice, actually.

Manchester United
At some point in the last few years at the big kit company big annual gathering someone said, “What if football kits looked like bus seat upholstery?” and instead of being punched hard in the face, that person was promoted.

How many of you have bagged yourself a new United home shirt then? 😊

This shirt is objectively bad and if you like it you are wrong. It should be inserted up Sir Alex Ferguson’s backside until it dissolves.

Newcastle
It’s all about the width of the stripes with a Newcastle kit. If you are correctly a fan of narrower stripes, then this year’s Puma offering is very solid indeed. Have taken the narrowness concept too far with the collar, mind, which is slender to the point of non-existence.

The famous black and white stripes.

Decent kit, but as with all Newcastle kits these days, simply no getting away from the thought of how much better it would be with the Newcastle Brown star in the middle instead of shouting FUN88 at us.

Sheffield United
Genuinely, what are adidas up to with their collars this year? That apart, this is Absolutely Fine.

Passionate in our pursuit.

Tottenham
Tottenham are the most interesting kit case study in the Premier League. For some reason, all the kit manufacturers who have absolutely no qualms about charging £65 for a very slightly different red shirt or blue shirt or striped shirt each season somehow baulk at doing so with a white one. There is something about the “all that money for a white T-shirt” line of attack that seems to stick. As such, Tottenham kits tend to veer from “basically pretty much plain white and quite nice” to “loads of navy chucked at random areas of the shirt with wildly erratic results”. It’s not quite a year-to-year cycle but it’s not far off.

The riskier ones have, perhaps inevitably, produced both the best and worst of recent years. The 2015/16 sash was great, as were the blue-shouldered offerings served up by both Puma (think Gareth Bale eviscerating Maicon) and Under Armour (Harry Kane scoring hat-tricks every week). Then there are the disasters. The year Puma lost their damn minds and decided to put all yellow piss streaks down the shirt (Wigan 9-1) for instance.

Introducing our 2020/21 @nikefootball home and away kits! #RaiseYourDare ⚪️ #COYS

This is Nike’s second attempt at a jazzy Spurs kit, and we think it’s a second swing and a miss but aren’t entirely sure. It’s had terrible feedback but is definitely better than the awful dark blue gradients at the bottom of the shirt that did every bit as much to ruin the Champions League final as the second-minute penalty, and there are some good elements here. The weaved pattern and the collar and great. The navy blue shoulders are not. There’s enough good stuff here to make us think this kit might be a grower once you get used to it looking like all the players are wearing backpacks, but there’s no escaping the fact that if the desire to do something different could have been ignored and the shoulders left alone then this would be a much better kit.

Additionally, while it is technically outside the scope of this study, we must comment on the fact that #RaiseYourDare is a bollocks hashtag.

West Brom
Having got it so right with Newcastle, Puma stitch West Brom right up. Admitting that you’ve made it look like a barcode doesn’t get you off the hook for designing a kit that looks like a barcode.

We’re loving our #NewStripes and after a record first day of sales, it looks like you are too! 😍

This kit gets some points back for being sponsored by Ideal Boilers, a lovely throwback to simpler times in a world of shirts emblazoned with far-east betting companies and faceless financial institutions. But it is still a barcode, and you can’t get much more capitalist than that.

West Ham
Actually a very good round collar as round collars go. Shoulders are weird, though, and it’s definitely a significant backward step from the excellent blue-topped 2019/20 effort.

To be in with a chance of winning you need to do 3️⃣ things:

There’s a bit of Holland 88 going on here. On the one hand, any kind of nod to the second greatest kit of all time is a risk. On the other, if you’re going to nod towards an old kit it might as well be a great one. Wide cuffs on the adidas shirts are going to be a key feature of the season, and we’re pretty happy about that.