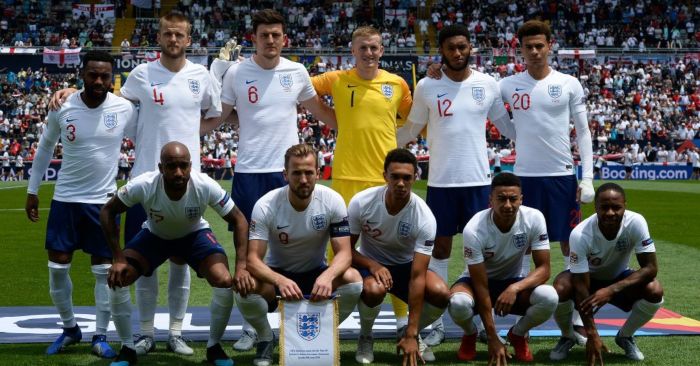 JORDAN PICKFORD
That is much more like it. Tranquillity and serenity does not seem to come naturally to Pickford but this game showed that he can quietly lead from the back without supervision. He was tested less often than against the Netherlands, but the save from Xhaka’s long-range effort was particularly sharp. Then came those penalty heroics. Gwon.

TRENT ALEXANDER-ARNOLD
The defensive ability of a Champions League-winning member of the Premier League’s best defence might apparently be worthy of questioning, but not even Martin Tyler can deny what Alexander-Arnold offers in attack for England. One fantastic driven cross for Sterling should have been converted after half an hour; one sublime delivery was inexplicably headed over by Alli minutes later. A couple of set-pieces went awry as the game progressed and his influence diminished, but there were no moments of Walker or Trippier-esque whatthef**kery. He created at least five more chances than any other player for either bloody side.

JOE GOMEZ
His middle name is Dave, he has three times fewer caps than Matt Upson, and he is England’s best centre-half. The opposition provided nowhere near as much of a challenge as Thursday but Gomez just exudes calm and confidence with every touch. This was his first start in the position since December 2, yet he looked completely untroubled throughout. No England player made more interceptions (4) or clearances (4), no England player gained possession on more occasions (8), and no starter completed more of their passes (95.1%) for either side. He is John Stones without the tendency to defecate at a moment’s notice.

HARRY MAGUIRE
It turns out that an assured partner makes for a more reliable Maguire. It seemed as though his Netherlands hangover would linger after he earned Rose a booking with yet another short pass to his left-back. But that was one of precious few blips as he soon settled into the match. A fine block on Seferovic was followed up with some commanding headers, and he even had time to complete a Cruyff turn in his own area as two players closed in. It was the most graceful thing one might ever wish to see. Those tired old legs almost let Switzerland in late on, but Gomez was on hand to cover.

DANNY ROSE
After the haphazard uncertainty of Chilwell comes the experience and nous of Rose. The left-back was barely tested in a defensive sense, and sacrificed his own attacking inclinations to allow Alexander-Arnold to roam with freedom on the opposite flank. With that said, it was Rose’s great cross which Schar deflected onto his own post with Kane lurking. He was unfortunate to be the first substitute – not least because his replacement was neither an actual left-back nor facilitated a formation change – because this was a diligent, patient performance.

ERIC DIER
Does he create? No key chances suggests not. Does he destroy? One tackle, one clearance and two interceptions is hardly devastating, but not too bad. Does he control? No player had more touches for either side, yet ten completed more of their passes. It was the very definition of of an interchangeable performance: any player could have done the job to a similar standard.

FABIAN DELPH
As above, only with a slightly better defensive output, marginally more reliable passing and a little more involvement further forward. There was nothing particularly wrong with his display, as with Dier, but England cannot really afford to have two water carriers in midfield when there is a thirst for much more.

DELE ALLI
If the cross for that first-half header was played behind him and he was marked, England would have won. Alli has this bizarre knack of only being able to direct and power a header properly if he is jostling with a defender, as proved in the build-up to Wilson’s disallowed goal and for Sommer’s extra-time save. When there is no challenge, as with that effort from about eight yards out from Alexander-Arnold’s cross, he inexplicably struggles.

Aside from his aerial presence, Alli actually had a great game. One good ball into Sterling was wasted, and there was none of his usual wastefulness. Few players worked harder at both ends of the pitch – he made more tackles than any teammate (4).

RAHEEM STERLING
His work off the ball made up for a general lack of creativity and threat in possession against the Netherlands, but Sterling had one of his worst recent England games in every sense on Sunday. Kane’s lay-off provided him with a perfect shooting opportunity after 14 minutes but it was side-footed straight into Sommer’s gloves. That would have been an improvement on his effort just before the half-hour, with Alexander-Arnold’s brilliant cross completely evading him. Then, when he received a pass from Alli and led a three-on-two counter-attack after England had cleared a corner, his poor control and indecision saw him tackled before he could even pick out the Tottenham man or the unmarked Lingard on the far side.

And that was just the first half. The second saw him barely make an impact until Alli picked out his run straight through the centre, but Sterling’s absolutely appalling first touch killed the opportunity. A few minutes later, his pass was far too heavy for even a fresh Wilson as he raced through on goal. Even his two best moments count for nought, with his fine run for Wilson’s goal expertly denied by VAR before an extra-time free-kick crashed against the bar.

HARRY KANE
Much better from the captain, particularly in the opening stages. His fine movement was followed up with a clever attempt that Sommer had to tip onto the bar. His quick-thinking and selflessness forged a chance for Sterling out of nothing. His ability to drop deep opened up space for teammates so often. But he had less and less of an effect on the game as it wore on, and though Wilson’s goal was disallowed, it highlighted the importance of having a centre-forward in the box at all times. How cruel that Kane the striker probably needs a player like Kane the creator behind him to be at his most dangerous.

JESSE LINGARD
That fine ball into Kane before the Tottenham striker hit the bar feels like ages ago. Lingard actually barely misplaced a pass all afternoon, creating a further chance later on. But to play 105 minutes in midfield against a relatively ordinary side and win possession back just once takes some doing. He was tidy and made no mistakes of note, so can be happy enough with his display.

KYLE WALKER (on for Rose, 70)
Got nutmegged as soon as he came on. Didn’t do much else.

CALLUM WILSON (on for Kane, 75)
Scored a disallowed goal a few minutes after he came on. Did nothing else.

ROSS BARKLEY (on for Delph, 106)
Great ball in behind to Alexander-Arnold within a couple of minutes of his introduction. Then dispelled any suggestion that his midweek mistake would dent his confidence by taking a rather short run-up before Panenka-ing all over Tony Cascarino’s face.