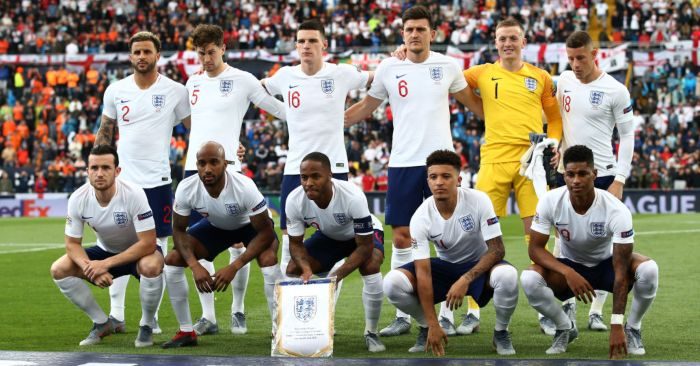 JORDAN PICKFORD
Could do nothing about either goal, and indeed made a wonderful save to delay the second. He made 11 stops to Jasper Cillessen’s two; that back four should probably forget about being invited to his next rave.

KYLE WALKER
Someone please tell him Trent Alexander-Arnold and Aaron Wan-Bissaka are both English. Walker actually made a fine start with an excellent bit of early pressing, forcing a two-on-two situation that he wasted with a poor pass in the tenth minute.

One moment in the 30th minute saw him receive a short pass from Stones, beat his man and burst into the gaping space in the centre of midfield. Sterling was completely free on the right and Chilwell made an unchecked run down the left, but Walker waited far too long to release the ball, eventually playing it behind the latter when he was stood offside.

Was remarkably fortunate that the Manchester United version of Depay showed up in Portugal, with the Dutchman stealing the ball off him on the edge of the penalty area before forcing a second-half save from Pickford. The own goal was just the icing on the cake. If he isn’t in a WhatsApp group with Kieran Trippier called ‘Right-backs with double-barrelled surnames can f*** off’ I’ll eat my hat.

JOHN STONES
He did the exact same thing in first-half stoppage-time. Stones received the ball from the left-hand side in plenty of space, decided to invite pressure as if he was asking for an RSVP to a wedding, then tried to nutmeg the opponent on the edge of his own penalty area. De Ligt should have scored from the subsequent corner.

The only variations in extra-time were that Stones decided to spin around twice when forced into making a decision, and his mistake fully punished. His problem is that he panics entirely too late – after possession is lost, even. Combine that with his refusal to mark De Ligt for the equaliser and his run of 19 starts in 24 internationals should be cause for immediate concern. Our kingdom for a Joe Gomez.

HARRY MAGUIRE
But if Stones should be fearing for his spot, Maguire ought to be downright sh*tting himself. As endearing as it is to see him barge through the midfield china shop like a particularly incensed bull on occasion, it hardly engenders confidence. The problem is that opponents have caught on and are more than happy to lay the trap, rolling out the red carpet for him to push out of defence with the ball before launching arrows at him like he’s one of those wildling giants out of Game of Thrones. He made me miss Chris Smalling, which is nigh on unforgivable.

BEN CHILWELL
Rescued Maguire with a weaker-footed tackle after his club teammate’s careless pass on the edge of the area in the first half, and linked well with Sterling at the start of the second. But this was quite easily his worst performance yet in an England shirt, and a rare smudge on the 22-year-old’s record thus far. He was uncertain in defence – as was the entire unit – and ineffective in attack. Chilwell also lost possession 29 times, more than twice as often as his next worst outfield teammate.

DECLAN RICE
He was, for the most part, tidy. He misplaced just two of his 54 passes, and no England player made more clearances (3) or interceptions (4). There was also a fine block on Depay. But tidy hardly cuts it against this standard. It tends to be enough to dominate the Czech Republic or Montenegro, but Netherlands fully and ruthlessly exposed Rice’s limitations as a defensive shield. There was a slight improvement as the game went on, and plenty more are ahead of him in the firing line. This was a necessary – and harsh – learning curve.

FABIAN DELPH
His cross for Sancho’s chance was excellent and should have been converted. No England player made more tackles (3) or interceptions (4). But as the most experienced member of this midfield, Delph had to offer more. He was actually great when Netherlands were yet to find their rhythm in the first half, breaking up attacks well with some fine positioning and awareness. But no player wilted quite as much; Walker, Stones, Maguire and Barkley might have made high-profile mistakes, but Delph became barely noticeable. The best part? He completed three passes in the opposition half in 77 minutes. Three! In 77 minutes!

ROSS BARKLEY
It was all going so well. A couple of great early passes preceded an unnecessary cross-field ball that was both behind and too high for Walker, leading to Netherlands’ first chance. Misplaced pretty much everything for half an hour thereafter, including his confidence. But he ended the first half wonderfully and was the only England player who looked comfortable in the second. His ball for Lingard’s disallowed goal was brilliant; his pass for Depay – albeit hardly helped by Stones – was even better. Two steps forward, and about five back.

JADON SANCHO
Will presumably be asked in for police questioning after that De Ligt nutmeg. His touch from a raking Stones pass was also delightful, but he really should have scored after Delph’s second-half cross left him with a free header. England lost roughly four-fifths of their attacking threat when he was substituted, such is the danger his mere presence poses.

RAHEEM STERLING
He was consigned to working in the background for much of the game, which is no insult. One chance created for Kane came soon after a delightful flick which led to Lingard’s strike, but VAR forced that even further into the back of the collective mind. The only player to win back possession more often for either side was the irresistible Frenkie de Jong, which sums up a tireless but ultimately pointless evening.

MARCUS RASHFORD
Bullied by De Ligt at one point in the 25th minute, losing the ball on the halfway line after a failed dribble then ending up sprawled on the ground after the centre-half held him off and delivered a cross from the right. He looked like an older brother being beaten by his younger sibling for the first time. Then five minutes later he reacted instantly to the centre-half’s miscontrol, racing into the area to draw a foul and calmly convert the penalty.

An excellent interchange with Sancho six minutes later created a second shooting opportunity, but Denzel Dumfries was on hand with a sublime covering tackle from left-back. He was injured in the clash and would not emerge for the second half. Because he was substituted; nothing serious happened.

HARRY KANE (on for Rashford, 46)
Well, he looked better as a half-time substitute than he did from the start. It must have been the extra five days of rest. Of course he had three shots, and of course none of them were on target.

JESSE LINGARD (on for Sancho, 61)
I audibly chuckled when the co-commentator on my stream used the sight of Jesse Lingard warming up to refer to England’s “strength in depth”. Then I laughed even more when he placed his first-time finish beyond a Barcelona goalkeeper. Then I wept as technology continued a slow and painful but inevitable uprising which will likely culminate in humanity’s collective demise, making way for a new world to be established without errors or mishaps.

DELE ALLI (on for Rice, 106)
England only conceded once with him on the pitch, and twice without him. Go figure.