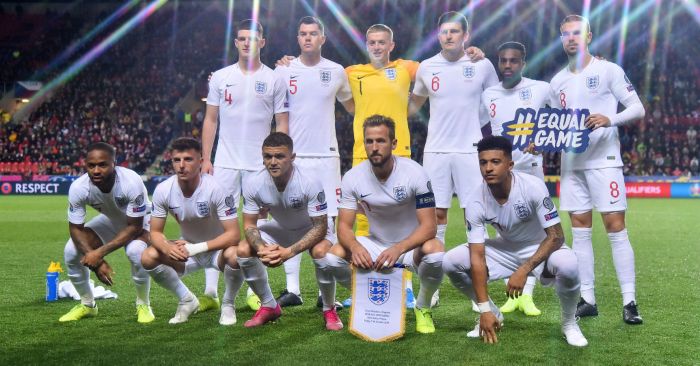 JORDAN PICKFORD
As nice as it is to watch an England game and consider the best player to be Pickford, that is more of an indictment on those ahead of him than anything else. But the keeper did as much as can be expected, making fine saves from Masopust and Kral during the second-half onslaught. There was little he could do to prevent either goal, aside from commandeering Keane’s mind and implanting a greater level of awareness into his subconscious. The sprawling stop from Coufal in the 9th minute was notable as it showed he could maintain concentration, with the effort coming amid screams for a penalty to be awarded after an apparent handball.

KIERAN TRIPPIER
It felt a little unfair to tarnish him with the same brush as the rest of a defence that was chosen in spite of their form rather than because of it. Trippier has been reenergised by his move to Atletico Madrid and is not in this squad because of reputation. But this was not good enough in a position that is so well-stocked. He played almost as an auxiliary winger at times as Rose stayed back in an unnecessary homage to their Tottenham partnership, yet created no chances whatsoever. He was equally ineffective in defence. It is worth reiterating that the starting right-back for the two-time Premier League champions has not even been selected in the last two squads to make room for such inadequacy.

MICHAEL KEANE
How curious that a centre-half who has not missed a single minute for the team 18th in the Premier League, who have not kept a clean sheet since their second game of the season, would look precisely as such. He lost Jakub Brabec for the equaliser, lost his mind countless times when pushing up out of position unnecessarily, and has surely lost his England place. He was f**king terrible.

HARRY MAGUIRE
Towards the start of the second half, Clive Tyldesley and Glenn Hoddle postured over England’s dearth of central defensive options. The point – that what once seemed to be a deep, thirst-quenching well has suddenly become a shallow pool – was fair. But the claim that Gareth Southgate is still searching for a partner for Harry Maguire is worth questioning. How many poor performances for his country will it take for there to be some sort of consequence for him rather than who he is next to? Or does Maguire’s club status as an £80m signing grant him, if not immunity, then more patience? There is no disguising the fact that this was the latest in a long line of particularly poor displays from a player who is supposed to be some sort of leader. He didn’t even win a header!

DANNY ROSE
For those rare occasions he wasn’t floored – fouling someone, being fouled, trying to block a shot or just generally forgetting how his legs properly function – he was simply flawed. Rose was pretty much a non-entity: too deep to contribute to the attack yet offering little to no protection in defence. The one time he did venture beyond the halfway line he received what looked suspiciously like a concussion for his troubles, hardly helped by the noise the stadium generated when the winner was scored down his vacated side. Ben Chilwell, please.

DECLAN RICE
He was not so much bypassed as he was removed from the equation entirely. There was a distinct difference between what Rice is supposed to offer – simplicity, mobility, security – and the reality of what he actually provided. He can be exonerated for slipping before the equaliser, but there were so very many moments that exposed his limitations. One came in the 7th when Sterling and Kane both broke forward and made defence-splitting runs, but Rice was either too slow to notice or simply unable to get control of the ball himself before releasing it.

No tackles and no interceptions doth not a defensive midfielder make. And that neither he nor Henderson committed a foul tells its own story: they simply couldn’t get close enough. That Rice was sacrificed for the third substitution came as no surprise; that we are now pining for Eric Dier is a bit of a shock.

JORDAN HENDERSON
As with Rice, he did not offer enough movement or options to those behind, nor sufficient supply for those in front. His central midfield partner at least has the excuse of inexperience, the sort which a Champions League winner simply cannot rely upon. Henderson feels perfect for this side as a deep-lying playmaker of sorts, with England’s front three somewhat replicating the style of Liverpool’s. Indeed, no outfielder played more than his 13 long balls. Yet only five found their target, half of Maguire’s total. England were slow, plodding and unambitious. Much of that was on their oldest player.

JADON SANCHO
Those claims that England had found their attack for the next decade or so felt awfully premature long before Jadon Sancho trudged off in the second half. No shots, one chance created and one dribble is considerably less than we have come to expect from a player attracting a £100m valuation and attention from clubs across Europe. There were flashes, some bright touches and a fine pass for Kane’s blocked shot just after half an hour, and this was but one game. But his inability to draw the ball from his own feet after Kane returned the favour in the second half spoke of a player who looks far more inhibited on the international stage than he has any right to be. This was a reminder, were it ever needed, that he is a teenager who will need time and patience to fully develop.

MASON MOUNT
The opening goal would not have been possible without his pass to Kane. And a positive, incisive dribble in the 29th minute was an attempt to force the issue, awake England from their slumber and show an intent to do something different. But he understandably faded thereafter. The system was altered entirely to accommodate him but the style of play was not: it still relied on an inspiration from deep midfield that never came. Mount certainly suffered for a lack of understanding with relatively unfamiliar players, but can be happy with the fact that no teammate created more chances.

RAHEEM STERLING
There were Vietnam-style flashbacks of the Sterling of old when he was played through for the penalty, and a timely reminder of how far he has come. It looked as though the chance had been completely wasted because of a couple of poor touches and an inherent indecision. But he rescued the situation, improvised and helped give England a lead he ought to have doubled when trying to round Vaclik. There is something to be said about the fact that he completed at least twice as many tackles (4) as any teammate, although he will be disappointed at being largely nullified throughout.

HARRY KANE
Some of what he offered was genuinely excellent. Kane’s ability to and insistence on dropping deep almost negates the need for a No. 10, such is his capacity to find and execute the sort of pass that he himself would relish. It was his first-time ball that preceded the penalty, his brilliant hold-up play that found an opening for Sancho and his movement that left an otherwise untarnished space in behind the defence. He had more shots than any player for either side, and should have converted the late chance that came courtesy of Barkley. But when blame is handed out for this defeat he will be towards the back of the line.

ROSS BARKLEY (on for Mount, 71)
Football is a fickle beast. Friday began with Barkley painted as persona non grata, the 25-year-old ousted for club and country by a player five years his junior. But he made more of a mark in 19 minutes than Mount did in 71. The pass for Kane’s late chance was glorious, and about as much as can be expected from an attacking player parachuted into such a situation. He was one of few players to actually improve his stock here.

MARCUS RASHFORD (on for Sancho, 72)
Completed more tackles (2) in 18 minutes as a striker than Keane, Rose, Henderson and Rice combined (1). Did not misplace a pass and only had nine touches. But failed to turn a tide that was in the process of sweeping England away long before he was introduced.

TAMMY ABRAHAM (on for Rice, 88)
What exactly was he supposed to do?