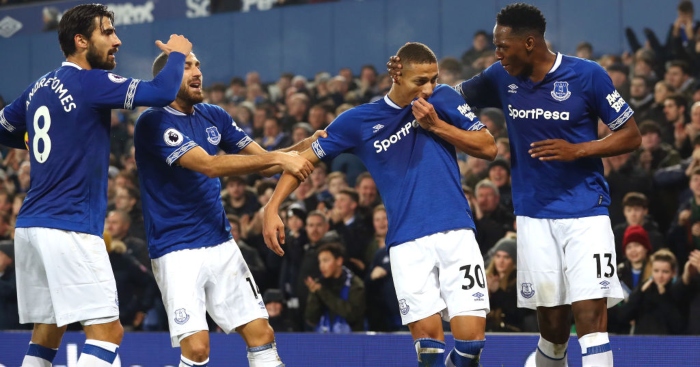 From the most expensive to the least, we take a look at a whole lot of players who cost a whole lot of money. This is why Everton are our biggest disappointment of the season…

Gylfi Sigurdsson £45million (16 August 2017) – MISS
Capable of a stunning assist and the occasional howitzer from outside the box, but the Icelander is not delivering enough of those magic moments to justify his hefty price tag.

Richarlison £40million (24 July 2018) – JURY’S OUT
Two goals and one assist this season – for a striker playing out wide – isn’t bad. The most shots per game (2.6) and the most tackles per game (3.5) means that Richarlison cannot be criticised for a lack of effort and he has undeniable quality that has previously drawn the attention of a host of top European clubs. But the Brazilian has also been dispossessed more than any Everton player, perhaps hinting at a man frustrated, trying to do too much.

Is there a more miserable player in the Premier League than Richarlison? Haven’t seen him crack a smile in months

Alex Iwobi £34million (9 August 2019) – JURY’S OUT
Alex Iwobi looks great until he has to do anything of any real note – pretty but pretty ineffective. Not that Everton can be surprised, as that’s the player he’s always been. Too early to tell whether he will develop his game at Goodison Park but, as it stands, many were right to baulk at the money paid to Arsenal to secure his services.

Jordan Pickford £30million (15 June 2017) – HIT
With the exorbitant fees now paid for half-decent goalkeepers – despite still being very capable of flapping at a cross or palming one into his own net – £30million seems about right for England’s number one.

Michael Keane £30million (3 July 2017) – MISS
Michael Keane pointing at Burnley’s Jeff Hendrick at the weekend as if to say ‘I should be marking you’ before completely ignoring his own thoughts as the Irishman scored unchallenged, sums up the former Manchester United defender – usually safe and solid but irritatingly likely to do something stupid at any moment.

Yerry Mina £28.5million (9 August 2018) – MISS
We all love a centre-back bringing the ball out from the back – roaming into the centre of the pitch to break a line or play a defence-splitting pass, unless you’re an Everton fan watching Yerry Mina. The Colombian was excellent against Burnley and Everton fans may still see the signing as something of a coup, but there was a reason Barca couldn’t wait to get rid of him – which is apparent every time the ball bounces off his shin as he tries to control it.

#OnThisDay in 2014, Everton signed Romelu Lukaku from Chelsea for a club record £28 million.

What is your favourite memory of the striker while he was at Goodison Park? pic.twitter.com/cMfcGDomtz

Moise Kean £27.4million (4 August 2019) – JURY’S OUT
A big price tag but an even bigger reputation meant Moise Kean looked – on the surface – like a great bit of summer business for Everton. However, in a team lacking in direction the 19-year-old looks completely lost. His talent at Juventus was clear for all to see and the Everton fans look set to give the young man the time he will need to flourish.

🗣”I will repay the fans on the pitch” pic.twitter.com/Ukb9b18yVB

Yannick Bolasie £25million (15 August 2016) – MISS
Just short of £1million per Everton appearance and the Congolese international was lucky to play that many.

Theo Walcott £25million (17 January 2018) – MISS
Too much money for the frustrating bit-part player he was at Arsenal and has proven to be at Everton.

Jean-Philippe Gbamin £25million (2 August 2019) – JURY’S OUT
Everton had four points from two games with Jean-Philippe Gbamin in the team at the start of the season. Hard to tell whether the Ivorian will be a suitable replacement for the superb Idrissa Gueye but the early signs were pretty good.

Morgan Schneiderlin £24million (12 January 2017) – MISS
Top of the pops at Everton in terms of successful passes (88.4%) but with many of those backwards or sideways and lacking the dynamism of other central midfielders, it’s difficult to know why the Frenchman is in the team or why they paid that much for a player with the same issues at his previous club.

Davy Klaassen £23.6million (15 June 2017) – MISS
Davy Klaassen is flying for Werder Bremen, with two goals and three assists in the Bundesliga this season. Meanwhile, Ajax promoted one Frenkie de Jong to the first team following Klaassen’s departure for Everton and he drove them to a Champions League semi-final before being sold to Barcelona for £70million. Everyone’s a winner – except Everton of course, for whom Klaassen was truly woeful.

Andre Gomes £22million (25 June 2019) – JURY’S OUT
Andre Gomes’ performances on loan at Everton last season drew interest from Tottenham and Manchester United before he signed for the Toffees on a permanent basis. Calm and assured in possession – it’s easy to see why. His injury means it’s hard to call him a hit but his absence from the side has coincided with Everton’s downturn in form. Seven points from four games before his injury, no points from four afterwards. Possibly not a coincidence…

Cenk Tosun £20.5million (5 January 2018) – MISS
With just eight Premier League goals following his big money move from Besiktas, Cenk Tosun now rots on the bench for Everton and has played just 35 minutes of football after failing to secure a summer move away. Simply not good enough and nowhere near worth £20.5million.

Lucas Digne £20million (1 August 2018) – HIT
Arguably the Toffees greatest creative threat. Lucas Digne looks like the player Barcelona thought they were signing from PSG in 2016. Two assists for the six Premier League goals Everton have scored this season and second behind Sigurdsson in key passes per game (2.1). A positive note to finish on…