We take a look at all the confirmed away kits. And Arsenal's unconfirmed one because...well... 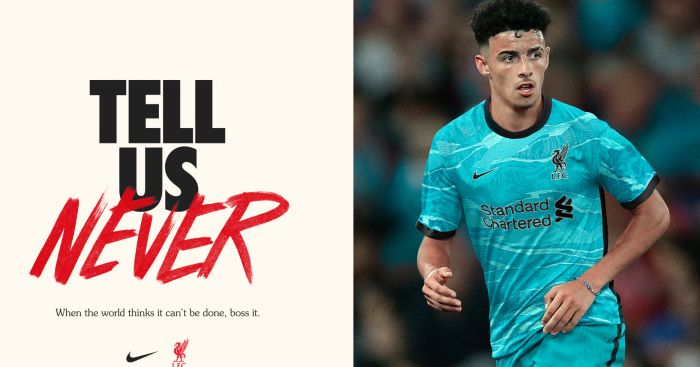 You’re slightly limited with home kits. You’ve got an established colour palette and you either work (pretty much) within it or incur all manner of AMF ‘game’s gone’ wrath and, to be fair, rightly so. Away kits, though. You can put any old shit on away kits. That is why they are always the best and worst kits going around. As with the home kits, we’re dealing only with official confirmed kits here in a desperate bid to preserve some dignity.

Arsenal
Right, we’re going to immediately break our own rule about only discussing confirmed kits. It was foolish of us to ever pretend we have any dignity. But we can’t pretend this isn’t out there.

I mean… I… Err… Okay. What the juddering f*ck is that? This feels like it should be part of Rorschach test. Do you see raspberry ripple ice cream or the aftermath of a grisly murder? Either way, it is a genuinely mental premise for a football shirt and it makes me confused and angry. And we can’t stress this enough: it isn’t even confirmed as the kit yet. It might be a banter. Football being football, some of the people unhappy about this shirt are cross because Arsenal kits should never be white, which is a bit like being annoyed about the colour of the car that’s just run over your family.

The deep blue third-kit version is an absolute stunner, to be fair, and calms the mood somewhat. Which is definitely needed.

Chelsea
‘Inspired by a classic tailored aesthetic but filtered through a modern street lens and colour palette.’ It’s bus seat upholstery, lads. It looks like nowt else. Get a hold of yourselves.

Introducing our new @nikefootball 20/21 away kit. Inspired by a classic tailored aesthetic but filtered through a modern street lens and colour palette.

The rumoured third kit appears to be an actual Crystal Palace shirt, for reasons that remain unclear.

Crystal Palace
Actual Crystal Palace have made excellent use of a smart Puma template for their three kits. We liked the home one, and we like both the alternates. In summary then: we like.

Everton
It’s Hummel so it’s good, yet it also feels like it might be the least good Hummel kit we’ve ever seen.

Liverpool
Bold. Vibrant. Electric. Sessions. The pictures might be leading us astray here, because Liverpool are insistent this is teal – which would tie in nicely with the excellent trim on the home kit – but in the photos it looks more light blue. Nothing wrong with a bit light blue, but in this case we do hope it’s more tealy than it appears here. Lazy round T-shirt collar a disappointment after the clear effort that went into making the home collar so good, but this is a decent enough away kit. It’s solidly mid-table and, coupled with the cracking home kit, represents a very acceptable start to life at Liverpool for Nike.

Away days in teal. #TellUsNever

Manchester City
Accompanied by all the usual ‘inspired by the architecture of the city’ guff, but never mind any of that. It’s an absolute beauty. The metallic copper on the badge and sponsor and such is a great complement to the black and dark blue. We have no banter about this shirt, it’s just really, really nice.

Newcastle
The away kit is apparently ‘fizzy yellow’ which if it isn’t already a Viz Profanisaurus entry surely soon will be. The third kit is ‘prism violet’, which at least sounds less like the description of a boozy piss. This one also ticks the ‘influenced by the location’ bumwater box with its design supposedly based upon the Tyne Bridge or, alternatively, It Has All Triangles On It.

Now HERE’S a kit that represented the Tyne Bridge! pic.twitter.com/iA25E7z046

Not sure either kit really works, but they are both better than their descriptions. The yellow is a bit wishy-washy and, well, pissy, while the purple ‘bridge’ one has the look of a training top. That said, the purple one might also be a grower. Which also sounds a bit Profanisaurus now we read it back.

🥁 Introducing our 2020/21 @pumafootball away and third kits.

Sheffield United
Now that is lovely. What adidas have done here is take the excellent colour of last year’s Manchester United away kit and simply improve every other element. V-neck replacing the round collar, grey instead of black as the secondary colour, literally any other sponsor’s logo apart from that giant ugly Chevrolet one. Tick, tick, tick. Excellent.

Bold in our belief. 🔥

The 2020/21 Sheffield United away kit, available in-store and online now.

The Blades will look, chortle, sharp on the road this year. Hahahaha. HAHAHAHAHA.

Southampton
A handsome navy blue away kit plus a Peru-mirroring negative of the excellent home kit mean Southampton are without doubt the Premier League’s best dressed for 2020/21. Absolutely tremendous.

Tottenham
It’s green for some reason. No idea why, perhaps an attempt to channel the affection for what was actually a really ugly but sort of kind of green kit that featured in That Night In Amsterdam. Goes to show the futility of these features really, because kits are so often ultimately remembered for the games they were involved in. Which is why that ugly kit will be more fondly remembered than last season’s lovely light blue retro one which Spurs foolishly kept wearing in humiliating defeats.

It’s another round collar, but that apart there is nothing particularly wrong with this as an item of clothing per se. It’s just not very Spurs and is very goalkeeper.

West Brom
A thought experiment: is a silly barcode kit in any way improved by being green and yellow instead of white and navy? Inexplicably, it sort of is. Don’t ask us to explain the science of that, because we can’t.

Ready for the @premierleague. Order yours online ➡️ https://t.co/2BOuUPtwEt. pic.twitter.com/RxecLfruz5

West Ham
The vaguely disappointing home kit is all forgotten with this classic away kit. Wacky and zany away kits are all well and good, but there’s something pleasing about ones that are still demonstrably in club colours. The two horizontal bands on this work a treat and even the round collar works well.

🚨Kit of the Week – West Ham United ⚒ 125 year anniversary
A clean and crisp deign with a special edition badge. Keeping with claret and blue colour scheme for both kits. The away shirt is inspired by the FA Cup winning side in the 60s What are your thoughts? #westhamunited pic.twitter.com/Zy8Vh8MUc8