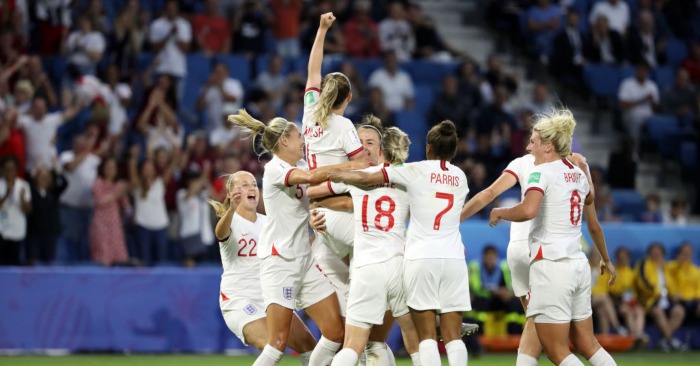 Karen Bardsley: Barely needed in the first half but stood tall when Norway began to grow in confidence against a tiring defence after the break. Bailed out by captain Steph Houghton at one point. 7

Lucy Bronze: A fantastic raid down the right wing produced a lightning-quick opener and, as well as driving home a game-killing screamer of her own, she did everything right in defence. 10

Keira Walsh: Gave the ball away twice as she settled into the game slowly, but largely coped well. 6

Steph Houghton: Typically immovable at the back alongside Millie Bright and two fabulous clearances – one off the goal-line – quelled any hopes Norway held of reducing the arrears. 8

Millie Bright: She recovered from a dodgy back-pass miscommunication with Bardsley to work effectively with Houghton to keep Barcelona star Caroline Graham Hansen quiet throughout. 7

Nikita Parris: It would be harsh to criticise for her tame penalty miss, with the game already won, as before that Parris had been a constant menace in and around Norway’s box. 7

Jill Scott: Whether or not she knew White was dummying the ball through to her from Bronze’s superb cross, Scott reacted coolly to slot home just two minutes in. England never looked back. 7

Fran Kirby: Appeared to struggle against tall centre-backs but showed flashes of skill to keep the ball moving forward. 6

Toni Duggan: Full of energy after missing two group-stage games, Duggan tracked back tirelessly to help close down the Norwegians before being withdrawn early in the second half. 7

Demi Stokes: Replacing Alex Greenwood as the only change, she was kept busy by Karina Saevik and will have been relieved no penalty was awarded when the ball hit her hand in the box before half-time. 6

Ellen White: Was it a dummy? Was it a miskick? Either way it helped Scott give England a very early boost, with White soon adding to her own fine World Cup goal tally at a key point in the match. 7

Beth Mead (on for Duggan, 53): Supplied the ammunition for Bronze’s rocket of a goal. 6

Georgia Stanway (on for Kirby, 74): Shored things up in the middle as Norway’s fightback faded. 6