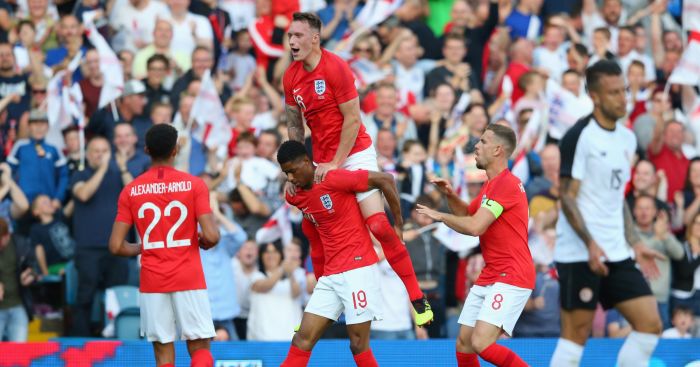 JACK BUTLAND
Looked at one point like he might copy Peter Shilton’s lead, who once touched the ball only five times in a game against Malta. But then came a snapshot from John Venegas, which was the perfect height for a goalkeeper out to impress – looks good on camera and yet not actually that difficult. He’s England’s No. 2, but that’s not intended as an insult.

JOHN STONES
The only player to start both England’s two warm-up matches, and yet Martin Keown believes Stones is at risk of losing his place. I can’t have that at all, given his ability to step out of defence. Stones is not yet in the form of last autumn, but he remains an important part of England’s defence

HARRY MAGUIRE
Committed a couple of unnecessary fouls and had a header cleared off the line when he probably feels that he should have scored. If it comes down to Cahill vs Maguire for that last place, we think that Cahill just nicks it. Still, having actual options is fun and Maguire is genuinely good.

PHIL JONES
The starter I have the fewest notes on, so let me instead take the chance to make two entirely unrelated observations:

– In our last World Cup ladder, Sarah Winterburn understandably expressed her concern about the lack of depth. Suddenly, depth has appeared. Southgate has picked a squad full of players in form and players who are match sharp rather than carrying knocks. The result is that this second XI was packed with those who have points to prove and hunger in their hearts. That made me very giddy indeed.

– Playing away from Wembley is bloody brilliant. Sell it and sell it now. This really could be England’s answer, if the money is reinvested appropriately.

DANNY ROSE
All eyes inevitably on him after his brave decision to reveal his mental health struggles, but Thursday was about Rose proving his fitness ahead of the trip to Russia and nothing else. Did that by constantly overlapping on the left wing, thanks to Costa Rica hardly attacking down their right flank. Some of Rose’s crosses weren’t quite up to scratch, but he has given Southgate a genuine headache. Do you go with the natural left-footer?

JORDAN HENDERSON
Very good, demonstrating the forward passing that Jurgen Klopp has insisted needs to be the rule rather than the exception. There’s still a massive question about Henderson being good enough against better teams than Panama and Tunisia (sorry), and Costa Rica barely put him under any pressure, but luckily we’re playing Panama and Tunisia very soon. Moved ahead of Eric Dier, I think. Unless…

FABIAN DELPH
Magnificent. Properly excellent. The next time somebody tells you that Pep Guardiola is just a chequebook manager, shove the video of this game under their nose and tell them to look at the improvement in a player who we expected to join a bottom-half Premier League side when Guardiola joined. Delph pressed, harried, hassled and moved, all the while completing 93 of 97 attempted passes (67/75 for Henderson) and creating two chances. No other England player created more. Bloody hell.

RUBEN LOFTUS-CHEEK
England’s second best player. Southgate clearly likes Loftus-Cheek and has fast-tracked him into the senior squad. When you watch how comfortable he is on the ball, and how much upper body strength he has to retain it, you can see why. Loftus-Cheek seems able to play an 11-a-side international like a five-a-side match, constantly giving and receiving the ball while moving. At times in the first half, I caught myself purring and blamed it on the cat. Guess how many passes he misplaced? No go on, guess. None. Nada. Zilch. Zip. And unzip…

MARCUS RASHFORD
A sodding brilliant goal, but more important than that was the way Rashford played with almost total freedom. It’s one thing doing that in a pre-tournament and another actually doing it in Russia, but Rashford looked like a young man who *enters whispering mode* was enjoying his football away from the constraints of his club. Please don’t shout at me @Mourinhoholic and your friends. Is Raheem Sterling suddenly worried about his place? Do we have actual competition for places? Oh God just pass me the face paint.

JAMIE VARDY
The big loser of the evening, even if that wasn’t really his fault. I can see why Southgate wanted to give Vardy minutes given that the World Cup starts a month after the end of the season, but he is far more effective when sitting on the last shoulder of a high defence. You’d have to get on a ship and sail to the Mariana trench to find something deeper than Costa Rica’s defence, so while Rashford and Loftus-Cheek delighted in the space behind the striker and in front of that defence, Vardy had just seven first-half touches. Not his opponent, and so not his night.

DANNY WELBECK (on for Vardy, 61)
He looked a bit awkward and then scored a goal, because that is what Welbeck does for England. And I love him so.

DELE ALLI (on for Henderson, 64)
A couple of ropey touches, but settled down and created Welbeck’s goal. If it was a cross…

KIERAN TRIPPIER (on for Alexander-Arnold, 64)
It still surprises me to see him on set-pieces, but seems to be making a good job of it. Other than that, tidy.

NICK POPE (on for Butland, 64)
The fifth Burnley player to be capped by England recently. Sean Dyche is a hero.

GARY CAHILL (on for Stones, 64)
I somehow feel more safe when Cahill is around, like he’s a lollipop lady or a nightlight.