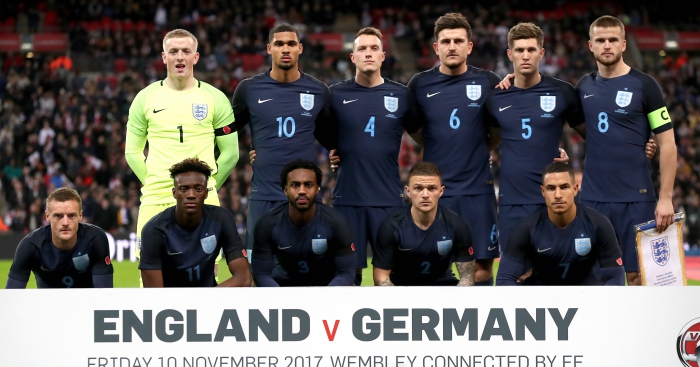 JORDAN PICKFORD
The nature of his two excellent first-half saves – one low to his left and one low to his right – would have had Joe Hart feeling a little queasy on the bench. He just exudes calm and seems weirdly more difficult to beat one-on-one than in any other situation. Unfortunately for Jack Butland and his brittle bones, Pickford might have edged into second in the pecking order, and has every chance of securing top spot in the remaining friendlies.

HARRY MAGUIRE
Runs really weirdly. Created three goalscoring chances – the joint-most of any player for either side. Did a step-over in Germany’s half 19 minutes in and had me laughing for about half an hour. Then embarked on a run towards their penalty area in the second half and I almost had to phone for an ambulance.

In terms of actual defending, he carried out his job as he often does. He is a brick wall of a human being, and repelled attacks in a similar fashion.

JOHN STONES
Blamed for Maguire’s panicked early back pass, so was not even responsible for his only mistake of the game. He is quite simply England’s best centre-half, which did not seem likely only a matter of a months ago. Cheers, Pep.

PHIL JONES
So fearful of the prospect of facing Leroy Sane for a full 90 minutes that he motioned to the bench and complained about his hamstring after about ten. Lost a couple of battles but won the war when he cleared the Manchester City winger’s effort off the line with his beautiful head. Sadly succumbed to his injury midway through the first half, but was compelling viewing beforehand.

KIERAN TRIPPIER
Owes Ruben Loftus-Cheek a shandy after a rare moment of wastefulness in front of goal robbed the debutant of a gilt-edged early opportunity. His delivery was otherwise typically impeccable from open play, and he continues his recent wonderful form for Tottenham. Knocking on Kyle Walker’s door, but not yet knocking it down.

Stones, Maguire, Gomez were excellent tonight. Trippier good too but Walker will be there in Russia. #ENGGER

JAKE LIVERMORE
His job is to recycle possession, yet he was constantly putting tin cans in the garden waste bin. His job is also to press in central midfield and ensure his opponents do not enjoy too much time on the ball, yet Mesut Ozil and Ilkay Gundogan all too often enjoyed the freedom of Wembley to roam and create. Would not be starting were it not for the injury epidemic, but still feels like such an underwhelming option.

Also had a shot at one stage, then presumably suffered a rather heavy nosebleed.

ERIC DIER
Whether the otherwise meaningless sideshow that is the England captaincy inspired an improved performance or not is difficult to tell, but Eric Dier certainly had his moments against worthy midfield opposition. Displayed something approaching a passing range on a number of occasions, and followed up a clever run with a dangerous cross in the second half, but Germany defended it well.

Does have to be tarred with the same brush with Livermore in terms of his defensive work, as the pair were charged with monitoring Ozil and Gundogan when Loftus-Cheek strode forward. One tackle and one clearance in 90 minutes is hardly inspiring. But then he is everything that’s wrong with the modern game.

RUBEN LOFTUS-CHEEK
The man-of-the-match on his England debut. Loftus-Cheek was central to almost everything England created going forward, a tour de force of twists, turns and touches that felt almost alien coming from a player bearing the Three Lions on his chest. He uses nutmegs more brazenly than a chocolate-based pudding recipe.

It was not even close to a faultless performance, and the Crystal Palace midfielder seems to never be in total control of the ball even while slaloming between five players, playing a one-two and picking out a perfect pass in one swift movement. But it was the sort of display that will keep him firmly in Southgate’s thinking. The 21-year-old misplaced just two of his 52 passes and completed the most dribbles of any player (4).

He is the evening’s big winner – even if he still hasn’t actually won a match this season.

DANNY ROSE
A fit and sharp Danny Rose is England’s first-choice left-back, and the Tottenham man ticked one of those boxes on Friday. His fitness can no longer be doubted, and to be fair the latter will come with more games. But he will be disappointed at having played Timo Werner on for the first-half chance that Pickford saved well.

An excellent early ball to release Vardy down the left-hand side was a highlight, and there were glimpses of his excellence throughout.

JAMIE VARDY
The oldest player on the pitch for either side was also the most threatening, and not just because he swore at everyone as usual. He created a chance within the first 90 seconds that England failed to capitalise on, and utilised his pace to almost devastating effect on numerous occasions thereafter. Lofted a Loftus-Cheek through ball over Marc-Andre ter Stegen’s head but, just as with a free header in the second half, could not force it over the line.

He offers something completely different to every other striker with his raw pace, and proved that, even as Southgate looks to the future, he still has a part to play in the present

TAMMY ABRAHAM
In a week that saw the retirements of Andrea Pirlo and Xavi, Tammy Abraham proved that he is the natural successor to their midfield crown. His first-half pass to release Vardy when the Leicester striker was faced with just one defender was absolutely sumptuous, and only overhit by about 427 yards.

It was indicative of a strange performance from Abraham: clumsy but bright, promising but disappointing. The 20-year-old completed just four of his nine passes, yet still almost scored and was an utter nuisance to a strong Germany defence. He is not even close to being a permanent international fixture just yet, but that is no crime.

JOE GOMEZ (on for Jones, 25)
An unremarkable debut, which is precisely what the Liverpool defender would have wanted when he was called upon just 25 minutes in. Had to cope with Leroy Sane, Julian Draxler and Timo Werner, and fared well.

MARCUS RASHFORD (on for Abraham, 60)
A quiet half an hour.

KYLE WALKER (on for Trippier, 71)
Might not have shaken Rose’s hand when the pair crossed paths on the touchline. More as we get it.

JACK CORK (on for Livermore, 86)
Is now an England international. Recorded a 100% pass-completion rate, and completed more passes in four minutes (6) than Abraham did in 60 (4).

JESSE LINGARD (on for Vardy, 86)
‘His eyebrows make him look constantly surprised,’ remarked my non-football-watching partner. ‘Like he is surprised to be playing football.’

No comment. But he was certainly surprised when he missed that chance in the last minute. The biggest compliment I can pay Jesse Lingard is that he is a busy f**ker.