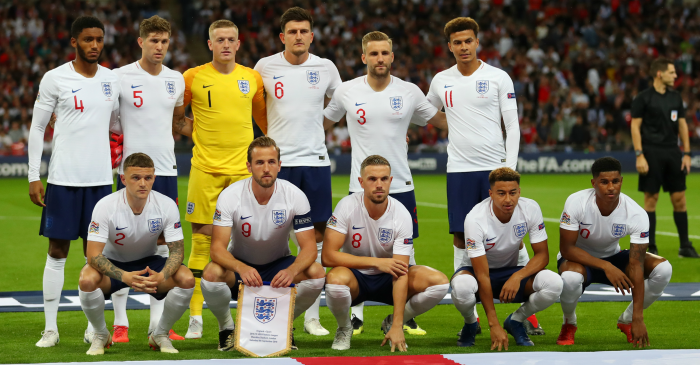 JORDAN PICKFORD
Will likely be disappointed at getting a hand but little more on Saul’s first-half equaliser, such is his attitude and determination to improve. But if there is any blame to be attributed to any England player for either Spain goal, Pickford is towards the bottom of that list. He made a couple of good saves, but had no real opportunity to showcase his wonderful distribution.

JOE GOMEZ
The least experienced member of England’s defence was its most impressive. Was one of many who can share the blame for Rodrigo’s winner, but was otherwise a natural fit in a side that reached the World Cup semi-finals two months ago. Kyle Walker is by no means a poor passer, but Gomez looks understandably more comfortable on the ball and in this position in general. One pass in particular was notable, breaking Spain’s midfield lines for one of the only times in the first half to find Alli in space, but the opportunity went to waste. A positive return to the fold.

JOHN STONES
A low-key first half preceded a quite bizarre second. A fine cameo as a holding midfielder, the usual catalogue of impressive passes, and a yellow card for an excellent tackle was a quite unexpected series of events on an otherwise understated evening.

HARRY MAGUIRE
It was almost the perfect World Cup tribute act. In the first half, a wonderful tackle on Rodrigo when one-on-one after Henderson was dispossessed in England’s half. Then came the marauding run from deep, like a beautiful bull rampaging towards Spain’s red shirts. A missed header from a corner late on saw the perfect hat-trick go up in smoke. There might be cause for concern at how Spain constantly targeted the left-hand side, where Maguire was tasked with covering for Shaw, but the mistakes were far and far between.

KIERAN TRIPPIER
If it is now a straight battle against Walker for the right wing-back spot, Trippier has laid down a decent marker. This was by no means England’s best player at the World Cup scaling those same heights, but he contributed plenty in attack and made just one mistake – albeit a costly one – in defence. It was his foul that conceded the free-kick from which Spain scored their winner. Yet he created twice as many chances as any player on the pitch (4), and made the most tackles (4).

DELE ALLI
It was all just a whole load of nothing, really. There is sympathy, because England’s midfielders are asked to do an awful lot to make this system as effective as possible, but the role simply doesn’t suit Alli’s skillset. There were moments, such as a burst of pace in the second half, but that was the barely edible filling in an otherwise bland sandwich. If everyone is fit, does he start?

JORDAN HENDERSON
A lack of early-season minutes at club level for Liverpool appears to have taken its toll, as he looks someway off the pace. There was some impressive work in the build-up to Rashford’s goal, as well as a great ball into Kane in the first half, but he is nowhere near the level England need him to operate at.

Spain, like Croatia in the semi-final, took little time in figuring out that swarming players around Henderson nullifies him completely, as Alli and Lingard are often pushed too far forward to drop back and assist. The amount of times he is left to drown alone in a sea of midfielders should alarm Southgate.

It should be said that Henderson can do so much more to help himself, mind. Thiago’s delivery should have been cut off at the front post long before Rodrigo stole in to score.

JESSE LINGARD
Will likely be tarred with the same brush as his midfield partners, but did offer more than both. It was his clever backheel that played a crucial role in the build-up to Rashford’s goal, and an intelligent header back to the edge of the area created a chance for Alli minutes later. When it comes to one-touch, instinctive football, there are few better. He also made a fine tackle on Isco in the first half, and provided the cross for Rashford’s saved header. No England teammate completed more dribbles (2). The positives far outweigh the negatives.

LUKE SHAW
First and foremost is the health of a player who appears to have broken a mirror while walking under a ladder and crossing a black cat. Just one week short of three years since a broken leg stalled a fine start to the season, lightning has hopefully not struck twice.

Before his untimely head injury, Shaw provided a perfect example of both what England missed at the World Cup, and what work he still needs to do to realise his potential. A clever header when covering for Maguire actually started a move he helped finish with a sublime pass into Rashford for England’s goal. But his defensive work left much to be desired at times, and Spain clearly targeted his flank. All too often the 23-year-old was caught in two minds as to whether he should press or sit back when Spain pushed forward. The necessary improvements will hopefully come as quickly as his recovery.

MARCUS RASHFORD
Can I have 90 minutes of pure, uncut, unadulterated, unfiltered Marcus Rashford, please? Why, of course. Here is your starter: a good run and fine finish from a difficult position. Feel free to wash that down with a decent but well-saved header. Next, your main course of well-collected pass but shot straight at the keeper. And for dessert, being substituted for Danny Welbeck ought to do it.

He was a constant threat, but will end the game more frustrated than elated. Still, at least he got a start.

HARRY KANE
A much better facilitator than he is often given credit for. The captain clearly thrives on having someone willing to make runs slightly ahead of him, allowing him to drop deep and become more of a playmaker. He only actually completed five passes in 90 minutes, but one was to Shaw for Rashford’s goal, and another should have resulted in an assist for the latter.

The problem is that Kane looks worryingly short of confidence and luck for a player who has hoarded both for a number of seasons. He is snatching at chances, and the sense of impending defensive doom has gone when he bears down on goal. The August drought is over, but he is struggling to truly quench his thirst.

DANNY ROSE (on for Shaw, 53)
Looked sharp and impressive after being introduced in the most difficult of circumstances. Rose always looks considerably better for England as a substitute, eager to stretch weary defences with blistering runs. Yet a fit Shaw still pips him to that starting spot.

ERIC DIER (on for Henderson, 64)
It seemed as though this was an opportunity to impress after a poor Henderson performance, yet that feeling was as misplaced as a Dier pass. He didn’t have a shot, create a chance, attempt a dribble, make a tackle, complete an interception or make a clearance in 26 forgettable minutes.

DANNY WELBECK (on for Rashford, 93)
When Danny Welbeck is having perfectly legitimate goals taken from him, the VAR gods must be welcomed.