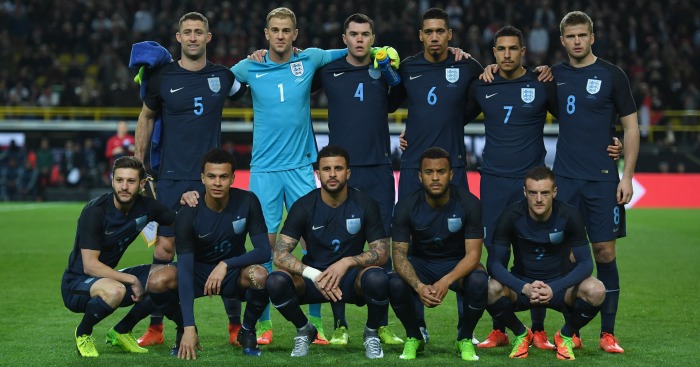 JOE HART: Hart’s short passing was actually excellent, and that was the side of his game under the most scrutiny given his Manchester City exile. He also made a superb second-half save and held the stinging shot to avert any danger, but there was a fluffed punch that led to a chance for Julian Brandt that brought back horrible memories of France.

KYLE WALKER: I have been on the end of readers’ sharp tongues already for saying I’m disappointed with Danny Rose and Walker for England in comparison to their superb Spurs form, and this was a continuation of that theme. Given licence to fly down the right flank, Walker too often seemed cautious and was screamed at by Adam Lallana for stopping his run. Nothing wrong with Walker’s performance at all, but it sometimes feels like he is holding back a gear for England.

RYAN BERTRAND: Solid is as solid does. Bertrand doesn’t have the dribbling ability of Rose or Shaw and so is always likely to be second choice in this formation, but he is England’s best defensive full-back without exception.

GARY CAHILL: Normally Cahill is the prime candidate for the player most likely to end up with no notes at full-time, but this time I had plenty. That’s because he did a weird handball in the first half and turned his back on the ball for Lukas Podolski’s winner. Still, he’s captain, more reliable than Chris Smalling and certain to start in a centre-back pairing, let alone a defensive three. Whether you like it or not.

CHRIS SMALLING: Only just realised (actually, Sarah Winterburn first realised it) how one-footed Smalling is, to the extent that he actually invited pressure on two occasions by spending time running around the ball to pass it with his right foot. A game (and career?) summed up by the incident in the first half when a decent tackle in the corner was followed by a promising one-two with his centre-back colleague and then Smalling losing possession by knocking the ball too far in front of him. He won’t change now.

MICHAEL KEANE: He did get caught by Leroy Sane towards the end of the game, but that was the only black mark on an otherwise excellent debut for Keane. Not used to a back three at club level, but has played right-back for England’s Under-21s and was comfortable in the role. Keane registered the highest passing accuracy (94.3%) of any player in the first half and made 39% of England’s clearances. So there.

ERIC DIER: Learned nothing that we don’t already know. Dier looks unperturbed in midfield against a team that is happy to sit back and let England have the ball and not intent on pressuring him when in possession, but we’ll still worry about him in competitive internationals when it matters. Sorry.

JAKE LIVERMORE: Not bad at all, particularly given the stick before the game. We can’t demand different players, different shapes and players in form given a chance and then mock when Gareth Southgate tries to do exactly that. Livermore’s longer passing was good, and he ranked first for tackles and joint first for interceptions among England’s players. Did you see anyone in that midfield attempting a Hollywood pass that went into the third row of the stand? No.

ADAM LALLANA: He really is England’s best player, you know, and I wish with all my heart that he was turning 24 in less than two months and not 29. Southgate’s 3-4-3 may not be perfect in every position, but if it allows Lallana and Dele Alli to flutter behind a forward and look wonderful then I’m game. Hit the post with a fine effort after another surging run forward, but it is Lallana’s maturity in possession and energy without it that has improved most. The game’s best player.

DELE ALLI: Should have scored when put through on Marc-Andre ter Stegen, but focusing on that seems a shame when there is so much to like about Alli’s game. Has that knack of creating extra space and time for himself, which comes from a blend of speed, quick thinking and an ability to use both feet. Had the most shots of any England player, completed the most dribbles, and was fouled the most times. And he’s only bloody 20.

JAMIE VARDY: Started almost by default given the other options, but played far better than that sounds. Vardy was not at his absolute best, but still  enough of a menace to busy a German central defender or two and stop them stepping up to frustrate Alli and Lallana. Was left a little too isolated to the long balls forward and did another Vardy fall for a non-existent penalty, but otherwise positive. Chasing down a long pass forward to hold it up and cross for Alli was a high point.

NATHAN REDMOND (on for Lallana, 66)
A couple of lovely touches and completed a couple of nice dribbles. I’m biased because I really like Redmond.

MARCUS RASHFORD (on for Vardy, 70)
No shots of any kind. There really isn’t much else to say, bad or good.

JESSE LINGARD (on for Alli, 71)
Somehow touched the ball 20 times, and yet I remember less than three of them. Came on at the worst possible time to impress, I suppose.

JAMES WARD-PROWSE (on for Livermore, 83)
Got caught on the ball in his only incident of note, which is a shame.

LUKE SHAW (on for Bertrand, 83)
I do not remember him touching the ball. Apparently he did three times, so I should probably have been watching.

JOHN STONES (on for Smalling, 84)
The only thing I saw him do was try and head the ball, let it bounce over him and set up a chance for Germany. Still, he has lots of balls.

THE FANS: Yeah, this is an extra. But when you listen to several thousand morons singing about ten German bombers, asking the German crowd if they have ever won a war and chanting about the IRA, you really do wonder about the state of our society.

No songs about the players on the pitch, no invention, just a bunch of oafs who think it is acceptable to taunt away supporters about a conflict that ended 72 years ago. Those that actually fought in that conflict not only don’t want you to sing about it, but probably feel entirely miserable that their valiant efforts have ended in people like you being allowed to travel abroad. Anyway, I look forward to those same twats crying in Russia because they been arrested unfairly or beaten up but I only threw a small chair, honest guv.

“Please don’t take me home” is their other imaginative ditty. You read our f**king minds.