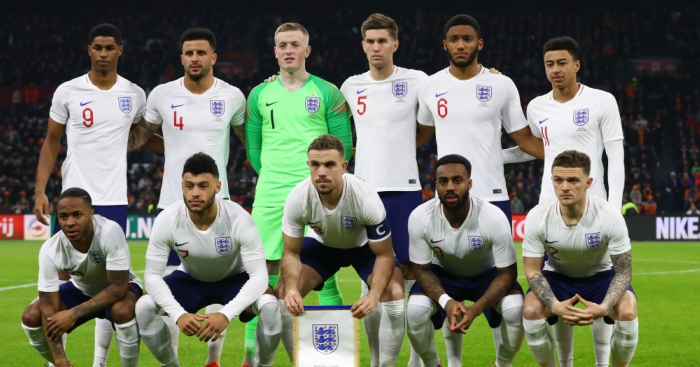 JORDAN PICKFORD
Gareth Southgate noted that a positive performance from his goalkeeper against Netherlands “gives us food for thought”, and while this was no banquet from Jordan Pickford, it was a delectable meal. His distribution was fine, his demeanour was cool and collected – although he did almost drop a b*ll*ck at a corner – and he had a number of routine saves to make. His most notable contribution was to race out quickly and bravely to thwart the on-rushing Quincy Promes, which required plenty of Dutch courage. Ha ha ha ha.

KYLE WALKER
The only England player in this current squad with a legitimate claim to being one of the best players in the world in his position was played out of said position, and yet Southgate’s decision paid off. Walker looked a little unsure in the opening ten minutes, having to curb his insatiable desire to sprint really fast up and down the wing. But he gradually grew into the game the more he settled into a groove, and some of his cross-field passes from deep were exquisite. It will be intriguing to see how he fares against more accomplished opposition as a right-sided central defender, but this was a successful first experiment.

JOE GOMEZ
Helped England keep clean sheets in both of his first two games, including nullifying Neymar back in November. But his third match ended in slightly more disappointing fashion, substituted due to injury after 10 minutes. Can console himself with two things: he is clearly part of Southgate’s summer plans, and his middle name is Dave.

JOHN STONES
Did an absolutely textbook John Stones by almost catching Pickford off-guard with a well-disguised short pass in his own area in the first half. That was the customary ‘what the fu…’ moment in an otherwise excellent display. The passing was typically crisp and accurate, but most encouraging was his defensive work. He dealt with the twin physical presences of Bas Dost and Wout Weghorst, and even tried to give Ryan Babel a lovely struggle hug in the 82nd minute. Amid his recent difficulties at club level, this was his first clean sheet since November.

KIERAN TRIPPIER
One of the more disappointing players. Trippier’s main strength is his delivery, and he constantly found himself in the right position before making the wrong decision. Is likely to keep his place against Italy if Walker is to reprise his new central role, and will know that he must improve that side of his game. Did link up well with Oxlade-Chamberlain, mind.

JORDAN HENDERSON
The water-carrier suffered a couple of spills but, by the end, had completed a thankless task admirably. Henderson enjoyed a monopoly on possession in the first half, playing some neat one-touch football in search of any potential openings. He is often unfairly maligned for only passing the ball backwards, and on occasion switched play effectively to display a slightly more nuanced range. His grip on the game was weakened in the second half as both teams made slight alterations to their systems, and he was man-marked far closer after half-time. Even with two more attack-inclined midfielders alongside him, and thus an added defensive workload, this was easily one of his best England games.

ALEX OXLADE-CHAMBERLAIN
An understated and underrated performance. Oxlade-Chamberlain is a player gifted with all the physical attributes, a footballer in the body of an athlete. So this was a fine reminder that, in the right circumstances, he has the tactical acumen to match. As one of two more attacking central midfielders, Oxlade-Chamberlain had to be more measured and thoughtful than usual; he had to be proactive rather than reactive to time his runs and exploit the space. He did so to perfection, playing a part in the goal and linking excellently with the forward players. It was, above all else, a pleasingly mature display.

DANNY ROSE
The biggest loser of the evening. This was his chance, his audition to start in Russia, but he seemed to have rehearsed for entirely the wrong role. He was defensively sound, save for one or two sloppy passes letting Netherlands in, but what is usually his main strength was his glaring weakness. One of the accusations against his main rival for the left-back spot, Ryan Bertrand, is that the Southampton defender offers too little in attack. That was not exactly the case for Rose on Friday; rather, he actively stunted a number of promising moves. His delivery was painfully off-kilter, indicative of a man who has lost his place at club level and his confidence overall. Of his nine crosses, only one found its target.

JESSE LINGARD
Was pretty ineffective on the ball for 58 minutes, helped created and score the winner in the 59th, and was substituted in the 68th. And that will absolutely be enough to boost the reputation of a player who has slowed down somewhat at club level. This was the first time he has scored in a match he has started since January 5 against Derby in the FA Cup, suggesting his role could still be that of impact substitute in the summer. But this was a timely reminder that he offers another option if and when it is needed. His off-the-ball running was selfless and superb, and he just really enjoys playing football, doesn’t he?

RAHEEM STERING
Perhaps the biggest compliment one can pay Sterling is that England had barely any attacking impetus after he was removed with more than 20 minutes to play; they had one shot after the 64th minute. The 23-year-old operated in a more central position but was the player most obviously used to dealing with packed defences and tight spaces, able to rely on quick, one-touch interchanges instead of receiving the ball and having to look around for options. He created four chances, at least twice as many as any other England player.

MARCUS RASHFORD
As with Lingard, his best work was all off the ball, which lends itself to going under the radar. His runs were excellent but he was poor in possession, failing to complete a single dribble or chance. He also had the most unsuccessful touches of any player (5) – although he did deserve a penalty in the second half.

HARRY MAGUIRE (on for Gomez, 10)
Told by Glenn Hoddle to “just get rid of it” moments after playing himself into trouble, and moments before playing himself out of it. Maguire suffers more than most due to his size, meaning he is perceived as more of a brutish defender than anything else. But he was composed in possession, and helped England keep their tenth clean sheet in 12 games. The opportunity presented itself due to a teammate’s injury, and he ruthlessly bundled it over on the byline before clearing it from danger.

DELE ALLI (on for Lingard, 68)
Hardly reflects well on him that England were noticeably poorer after he was introduced. That might sound unfair as he was one of three players to be brought on at the same time, but this is the sort of system that Alli should thrive in, and two of his main competitors in Lingard and Sterling performed well. Neither Vardy nor Welbeck will expect to start in Russia. On this basis, neither will Alli.

JAMIE VARDY (on for Rashford, 68)
Played 22 minutes; did not have a single touch. England will never play to his strengths, and he will likely never give them a reason to.

DANNY WELBECK (on for Sterling, 68)
Managed not to dive.

ASHLEY YOUNG (on for Rose, 71)
Barely played, but the performance of Rose will have still raised his stock.

ERIC DIER (on for Maguire, 89)
As ineffective as the rest of the substitutes, but at least has the excuse of only playing for one minute.