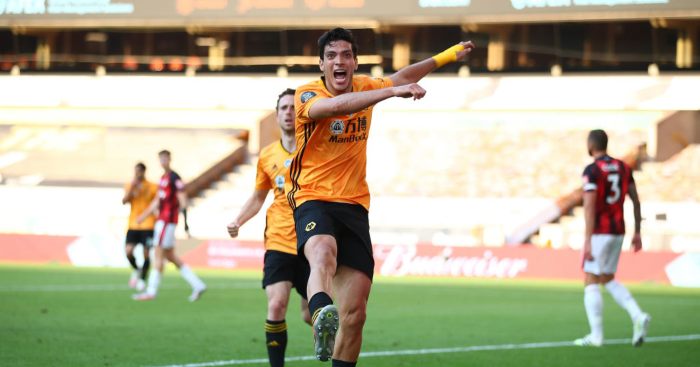 The striker’s 24th goal of the season gave Nuno Espirito Santo’s side a 1-0 win over Bournemouth on Wednesday to keep the pressure on fourth-placed Chelsea.

Wolves are sixth, level on points with Manchester United and just two points adrift of Chelsea with seven games left.

“We have to dream big and keep going like this,” he said, with Wolves also aiming to reach the Europa League quarter-finals when the competition resumes in August.

“It feels amazing. It’s a feeling of that we are working very hard the last couple of weeks before we start again.

“We made it great on the pitch and I think if we are like this, as a pack, then we can achieve anything.

“We now have two days to rest, but we know that after the Aston Villa game (on Saturday), we have a week to rest, to train and to get back again.

Jimenez linked up with Adama Traore to head in after an hour on Wednesday, the 10th time the pair have combined to score this season.

That number is the most in the Premier League and Jimenez is relishing their partnership.

“All of us are waiting for that opportunity, so I’m happy to be scoring, to be the goalscorer, and very happy for Adama.”

Defeat kept Bournemouth in the relegation zone on goal difference and they host Newcastle next Wednesday.

The Cherries will be without eight-goal top scorer Callum Wilson though after he collected his 10th booking of the season and is banned for the next two games.

Josh King remains a doubt with an ankle injury and boss Eddie Howe admitted losing Wilson will be a big problem.

He said: “It’s a big disappointment, I don’t think it was a yellow card, he was well within his rights to go for the ball and if he gets a nick on it first it’s potentially a goal.

“We’re really disappointed to lose him. I said to the fourth official Callum had to go for the ball, it’s there and he’s missed it by inches. I don’t know what the referee wanted him to do. We’re going to miss him for sure, he has been a huge player for us.

“We’ll wait and see on Josh. He’s had a scan, it doesn’t look serious but I can only say he’ll be fit if he trains and recovers in time.”