Home All The News RB Leipzig 3-2 Man Utd: Comeback one step too far 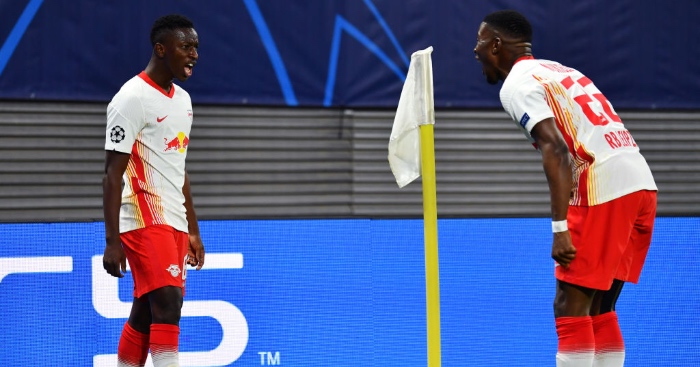 Man Utd crashed out of the Champions League after falling just short of a remarkable European comeback at RB Leipzig as Ole Gunnar Solskjaer’s side lost 3-2 in Germany.

Having started Group H with a win at last season’s runners-up Paris St Germain and a five-star display at home to Tuesday’s opponents, the Red Devils undid that fine work and have now dropped into the Europa League.

Man Utd had only required a point from their final two matches to reach the knockout phase, yet last week’s loss to PSG was compounded by a heartbreaking defeat at Leipzig as poor defending proved too much to overturn in a grandstand finish.

Angelino, on loan from Manchester City, got Julian Nagelsmann’s men off to a dream start by lashing home inside two minutes, with Amadou Haidara adding a second soon after.

Man Utd could easily have fallen further behind before substitute Justin Kluivert took advantage of hesitant defending to put Leipzig three goals ahead moments after a Bruno Fernandes free-kick hit the bar in the second half.

It proved a hole too big for Solskjaer’s comeback kings to dig themselves out of, despite Fernandes scoring from the spot and substitute Paul Pogba heading in off the back of Harry Maguire in the final 10 minutes.

United’s wretched defending on Tuesday played a key role in their Champions League exit, as did the shock loss at Istanbul Basaksehir and to some extent the decision not to take off Fred before his costly red card against PSG.

The Brazil international was suspended for the Group H finale but Pogba was only named on the bench, with Solskjaer insisting tactics rather than the comments of the midfielder’s outspoken agent Mino Raiola was the reasoning.

Caught cold by the intensity and aggression of Leipzig, Angelino saw another shot saved and Mason Greenwood wasted a fine chance before the visitors were hit by a 13th minute gut punch.

Angelino was afforded time and space to get a cross in from the left, with Haidara ghosting in at the far post to fire home for Leipzig. Alex Telles’ hopeful claims for a foul in the build-up were ignored.

United could easily have been 3-0 behind soon after as another diagonal ball to Angelino disrupted the visitors, only for unmarked Emil Forsberg to miss the target.

Returning Luke Shaw raced back to cut out a dangerous pass that came from Wan-Bissaka’s inexplicable backheel as they continued to flounder, putting out for a corner that led the net to ripple once more.

But much to the relief of those connected to United, the video assistant referee ruled that Willi Orban had strayed offside before turning home after Ibrahima Konate’s header came back off the post.

Greenwood and Marcus Rashford were struggling to seriously threaten as the first half ended with Solskjaer and his coaching staff warned by referee Antonio Mateu Lahoz as tension rose.

Donny Van De Beek came on for Telles as United reverted to a four-man backline at the break – a change that brought a swift uptick in performance, although a string of set pieces failed to bring a clear-cut chance.

Rashford hit a hopeful shot wide before Fernandes called Peter Gulacsi into action, with the Portuguese then seeing a dipping free-kick hit the bar from 20 yards in the 68th minute.

A minute later and United were further behind. Maguire and De Gea hesitated when a bobbling Angelino cross came over, with Kluivert reacting to clip the ball over United’s goalkeeper.

The visitors did not give up despite that third Leipzig goal.

Scott McTominay saw a fine effort saved and Gulacsi got down well to prevent Greenwood after a beautiful pirouette, before the teenager earned a penalty after a Konate barge.

Fernandes slotted home the spot-kick and United swiftly reduced the deficit further, with Pogba leaping highest to meet a corner at the far post and getting away a header that went in off Maguire and Konate.

McTominay and Rashford had efforts to level, with Gulacsi preventing Nordi Mukiele from scoring an own goal as Leipzig progressed at United’s expense.