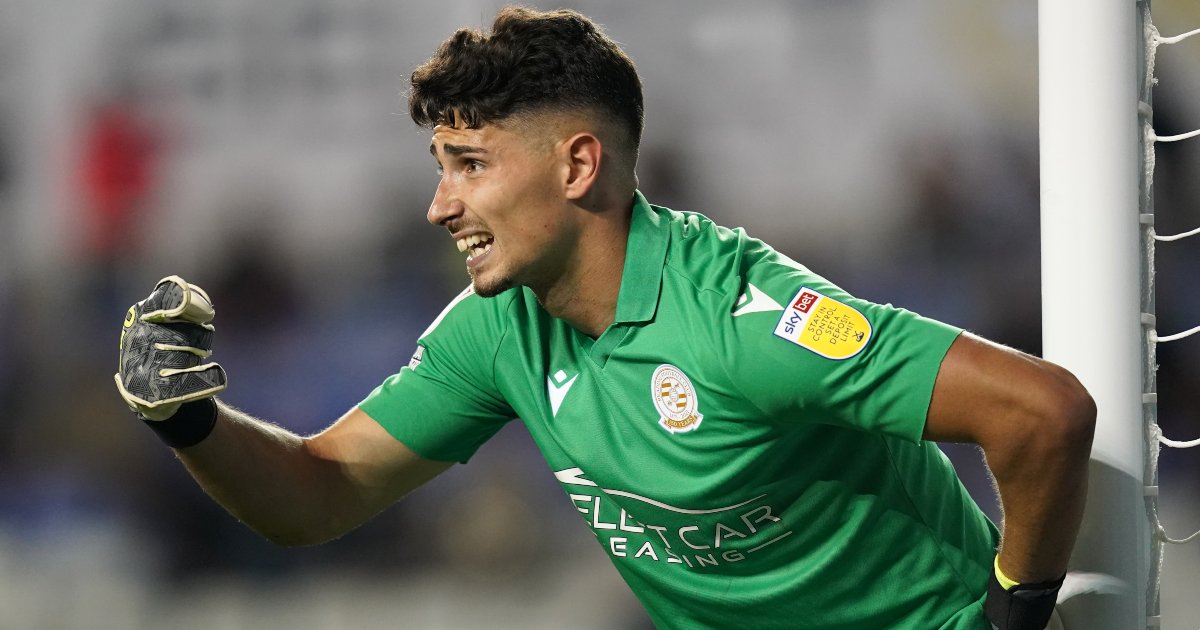 From the Reading bench to an international call-up in 10 weeks – Luke Southwood has been on a ride.

Reading goalkeeper Luke Southwood has had what he’s described as a “whirlwind” couple of months and it’s easy to understand why.

Having started the season as the Royals’ second-choice stopper, a self-inflicted broken hand to regular starter Rafael Cabral (reportedly caused by punching a whiteboard in frustration after relinquishing a two-goal lead against QPR), meant 22-year-old Southwood was catapulted into first-team action and hasn’t looked back since.

Southwood is one of a wave of players to come through Reading’s academy ranks to the first team in recent years, with headline moves among fellow graduates in the summer coming for Michael Olise and Omar Richards heading to Crystal Palace and Bayern Munich respectively.

With five wins in his first six starts in the Championship, Southwood has quickly established himself in the Reading goal and has reaped several rewards for his efforts.

But he was given just 24 hours’ notice to prepare himself for what was about to be only his second league start for the club he has represented since the age of eight.

Andy Carroll and Danny Drinkwater in a winners column!

“It was crazy,” Southwood exclusively told Football365. “I left the game on Saturday and we were off on the Sunday, so I had no idea [about the injury].

“And then we came in Monday morning and my goalie coach called me over and said ‘look, I think Rafa’s hurt his hand, get ready to play’, basically.

“I was number two for a good year and a bit before that, and you always keep yourself ready, but when that moment actually comes it’s a bit, ‘ah s***, here we go, this is what I’ve been waiting for’.

“Obviously, the butterflies start going and you get into the game. Before you know it, you’re sort of in the flow and it was definitely a moment of ‘oh wow, this is actually happening. This is what I’ve been working for, this is the moment I’ve got to try and show what I can do’.”

And he’s certainly done that. His impressive performances have seen him named in the Championship’s Team of the Month for October, and he went one further by being recognised by WhoScored.com in their Championship Team of the Season So Far.

From then, things have only continued to escalate as Southwood was awarded his first senior international call-up with Northern Ireland at the start of November.

Understandably, then, his assessment of going from no first-team football to a squad taking on the winners of the Euros in a matter of weeks was an enthusiastic one.

“It was incredible,” he said. “The experience was unbelievable, but sort of exactly what I expected in a way, as good as it was – a bit of a ‘pinch yourself’ moment, especially being on the bench for the Italy game.

“Two and a half months ago I was sat on the bench not playing, waiting for my chance but not knowing when it was coming, and then I was in a squad against the European champions.

“It was a [moment] of ‘wow, my football career’s taken me to this bit’, so I felt proud of myself, but you’ve also got to try and just put it to the back of your mind because you’ve just got to keep going, you can’t stop.”

While his upward trend appears to be a sharp one, Southwood has certainly put in the groundwork to leave himself in this position.

After spells in non-league with Bath City and Eastleigh, he had a taste of top-tier football with Hamilton Academical in the Scottish Premiership.

Southwood explains that promotion to the first team without much prior experience isn’t quite the same when you’re between the posts.

“As a goalie, you sort of have to do that [go on loan],” he said. “When you’re a young attacking player or even in defence, you can get your chance at the club you’re at. But whereas a goalie, you’ve got to build that level of experience before you get a chance at your club.

“To be fair, any manager – they don’t really want to put in an inexperienced goalie. I understood that, and that’s why I wanted to go on all these loans because I thought, when I do get my chance at Reading, I want to make sure I’m ready for it.

“That was why those loans were so important for me, and it worked. When I had that chance against Peterborough on that Tuesday night, I’d sort of been there before. I played at Rangers and Celtic and been at big stages, so it wasn’t too alien for me, which I think was really important.”

Southwood now has the task of trying to help Reading get back on terms as quickly as they can, having been deducted six points by the EFL for a breach of financial fair play regulations.

He admitted that the deduction had been part of conversations in the dressing room in the weeks prior to the verdict, and that it will only serve to motivate the team for the rest of the season.

Goalkeepers with the highest save percentage in the Championship:

But on a personal level, now he has secured his place in the starting line-up and opened the door on a senior international career, this has lit an extra fire within him to keep progressing even further.

“I’m definitely not trying to stop where I am now,” he elaborated. “I think my aim for this season is to keep building on my performances and keep getting better, and hopefully stay in that Team of the Year and keep my stats going well.

“Then a good little marker for me, I think, is to try and get myself as the number one for Northern Ireland. I think that’s probably my main goal away from Reading.

“I’m just taking it game by game, then if I keep doing well here, then that’ll sort of take care of itself. I’m definitely not trying to stop here and definitely trying to build on everything, and just keep getting better and better.”