Home Arsenal Ready and waiting: Ten out-of-work managers we may see next season 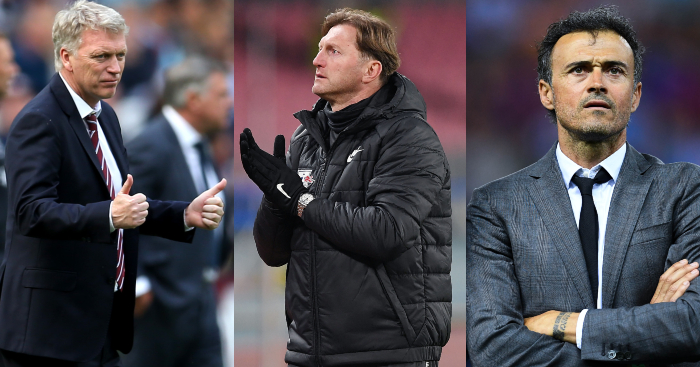 Luis Enrique
Enrique is in a slightly odd position of winning two league titles, three domestic cups, the Champions League, UEFA Super Cup and FIFA Club World Cup in three years in his last job, and yet is still scratching around for his next gig after a year out of the game. He wanted to take a sabbatical, but is now ready to get back into management.

Mentioned in more than passing for both the Arsenal and Chelsea jobs, but missed out on both, reportedly after making obscene wage demands of Chelsea’s hierarchy. If true, that’s pretty dim because it would have been an excellent fit post-Barcelona.

But Enrique has previously said that he would love to manage in England one day, and he would be an excellent mid-season option for a failing big club. Still, that probably takes one of Arsenal or Chelsea to collapse badly under their new manager.

Who he would join: Arsenal or Chelsea, but it will take a disaster under a new manager

Zinedine Zidane
The biggest stretch of the lot. If Didier Deschamps doesn’t win the World Cup this summer and leaves his position as France national team coach, Zidane will be the overwhelming favourite to take over. Having left Real Madrid and the media circus that can wear down a person, international football – and a gentle qualification campaign for Euro 2020 – might be exactly what Zidane needs.

Still, Zidane’s stock has never been higher and he deserves to be in demand. Having become the first coach in history to win three consecutive European Cups and also led Real Madrid to their first league and European Cup double since 1958, the most successful manager of world football’s last five years is out of a job.

There is only one likely place for Zidane to end up in the Premier League. It would take Jose Mourinho’s third season at Manchester United starting badly and causing the factions in his relationship with the club that have blighted his previous exits. Likely no? Mouth-watering? Oh yes.

Who he would join: Manchester United, but it seems highly fanciful

Peter Bosz
It clearly went very badly for Bosz at Borussia Dortmund after a bright start, leaving the club after six months having fallen out of the Champions League and drop down the Bundesliga table. But he did succeed at Ajax, taking them to the Europa League final. The suspicion is that he blew his chance at a bigger club, but remains an effective coach at producing a team littered with young players that plays attractive football.

Bosz’s stock is clearly low, particularly after Dortmund CEO Hans-Joachim Watzke said that he wasn’t confident in his coach’s ability even while the team were winning six and drawing one of his first seven league games. But with the old English guard struggling last season, he could be leftfield shout for a bottom-half team.

Who he would join: Southampton seems a good fit, if it all goes wrong for Sparky.

Laurent Blanc
It’s now over two years since Larry White was employed by Paris Saint-Germain, and he must be getting a little itchy about the lack of obvious route back into the game. If it seems remarkable that a coach who won Ligue 1 with Bordeaux and 11 trophies in three years at PSG cannot find work, there is a feeling that Blanc got a little found out in Paris.

That seems pretty unfair, in hindsight. Under Blanc, PSG reached the Champions League quarter-finals in three successive seasons, but he was sacked for failing to make better progress in Europe. Since he left, PSG have twice been knocked out in the last-16.

Blanc’s reputation may have slipped slightly below elite-club level, but he would be a cracking appointment for a top-half Premier League club. Everton or West Ham perhaps, if they hadn’t just got new sodding managers. Leicester City, maybe?

Who he would join: We’ll go for Leicester throwing huge amounts of money in Blanc’s direction.

Ralph Hasenhüttl
Now this one is really interesting. It rather passed us by that Hasenhüttl had stepped down as manager of RB Leipzig having failed to agree terms over a new contract.

“The club are well within their rights not to offer me an extension, but we also stressed that going into the final year of a contract without a clear long-term future plan wasn’t ideal” said Hasenhüttl. “I thought it was important for the future of the club, and I would have liked to have been given a reassuring ‘yes’ rather than a clear ‘no’. That’s why I asked for my contract to be terminated early.”

This is a manager who is younger than Jurgen Klopp and guided newly promoted Leipzig to second place in the Bundesliga and their first ever Champions League qualification. Of course he was afforded money to achieve that progress, but with expenditure comes pressure. Hasenhüttl developed and improved players like Naby Keita, Emil Forsberg, Timo Werner and Dayot Upamecano. He deserves to be in demand.

Who he would join: I think he would have been absolutely perfect for Everton, and I like Marco Silva.

And he smiles. Not wide enough to be obvious to anyone not staring intently in his direction, but he smiles. And on the inside his smile is wider. And he smiles

Who he would join: He’s already done most of them, so let’s say Cardiff City.

Slaven Bilic
Bilic’s punditry on ITV has been excellent during this World Cup, culminating in his response to be asked repeatedly about a penalty decision: “I don’t care”. It was nice to see Bilic in more relaxed mode after his limp exit from West Ham, unable to organise a defence and eventually shuffled out of the London Stadium to be replaced by David Moyes.

Still, it’s not all bad. Bilic left West Ham with the best points-per-game record of any of their managers in the Premier League, and can pint accusatory finger sin the direction of the club’s hierarchy, who sold his best player and replaced with a sea of dross.

Premier League experience is often crucial when clubs are searching for a mid-season replacement. Bilic would be a logical option for any bottom-half club struggling to get goals out of the team and thus labouring towards survival.

Who he would join: Cannot get away from Watford, however hard we try. And Javi Gracia surely won’t stay long.

Vincenzo Montella
Things have taken a bad turn for Montella. His status was sky-high having taken Fiorentina to three consecutive fourth-placed finishes in Serie A for the first time since 1960, and also led them to a Coppa Italia final and Europa League semi-final. He then had one season at Sampdoria and joined Milan, where he performed just about well enough in his first season.

Then things went south. Montella and Milan spent an awful lot of money last summer before winning six of their first 14 league games, causing the manager to be sacked in late-November. A month later he had jumped into the Sevilla job, and did beat Manchester United in the Champions League last-16. But he also turned Sevilla into a wretched La Liga side, and was sacked exactly four months after being appointed.

Turning to Montella now would be a gamble, but there’s clearly enough talent there for owners and chairmen to be impressed. And there’s one Premier League club that seems a wonderful fit.

Who he would join: Fulham.  If it goes wrong under Slavisa Jokanovic, why not turn to a former player?

David Moyes
A year ago, this would sound utterly ridiculous. Moyes had just been relegated from the Premier League with Sunderland with a 18% win ratio in charge. A club had turned to him to harden their shell in times of adversity, and Moyes had proven himself completely incapable of doing so. Following his failures at Real Sociedad and Manchester United, he goose looked cooked.

And then West Ham approached Moyes, who conceded that he had a point to prove but was desperate to transform his reputation. It was hardly plain sailing, but the move to make Marko Arnautovic his central striker was masterstroke and West Ham survived with relative ease.

Moyes won less than a third of his matches in charge, but it was enough. Now, with Alan Pardew’s reputation in tatters and Tony Pulis at Middlesbrough, Moyes joins Allardyce in waiting for a club in crisis.

Who he would join: Huddersfield Town (sorry Winty)? Burnley if Sean Dyche left? Fulham is they lurched from Jokanovic?

Quique Flores
Looking back at Flores’ single season at Watford, his sacking would appear to be one of the harshest in recent Premier League history. Appointed by a promoted team, he was given the task of keeping the club in the Premier League despite a massive turnover of players and owners who had got through four managers the previous season.

Flores had never before experienced English football, and yet he took Watford to 13th in the Premier League, the highest-placed promoted club and closer in points to ninth than the bottom three. Watford also beat Arsenal in an FA Cup quarter-final to reach Wembley.

Having left England, Flores took Espanyol to eighth in La Liga in his first season, their joint-highest league finish for 12 years, but was sacked in April after failing to build on that campaign. Does he deserve to be judged more kindly?

Who he would join: Southampton and Fulham strike as logical options.