Home All The News Ready for a first Clasico sans Messi, Ronaldo since 2007?

Cristiano Ronaldo is a bit tied up in Italy. Lionel Messi is in a bloody cast. 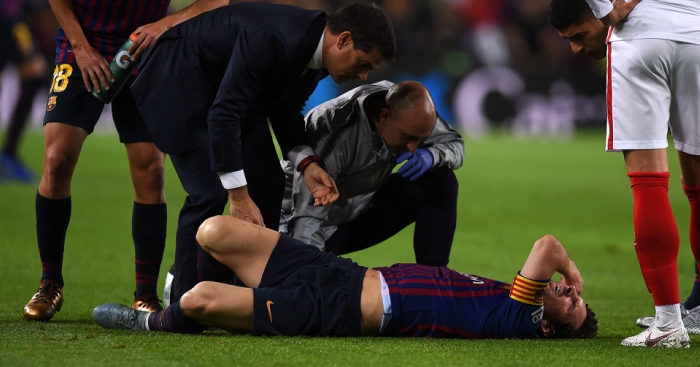 Barcelona forward Lionel Messi will miss next week’s Clasico against Real Madrid with a fracture in his right arm, the LaLiga leaders have announced.

Messi was injured when he fell awkwardly in the first half of Saturday’s 4-2 win over Sevilla, and the Argentinian now faces three weeks out.

Barcelona said on Twitter: “Tests carried out on the first team player Leo Messi have confirmed that he has a fracture of the radial bone in his right arm. He will be out for approximately three weeks. #FuerzaLeo”

But he was hurt midway through the first-half when he fell awkwardly in an innocuous-looking challenge with Franco Vazquez.

The Barcelona medical staff applied heavy strapping to his right arm but he was unable to continue.

After Sunday’s Clasico, Messi also stands to miss a Copa del Rey match against Cultural Leonesa, the return leg against Inter and LaLiga contests with Rayo Vallecano and Real Betis leading up to the next international break.

It’s been a while since there was a Clasico without Messi or Ronaldo. pic.twitter.com/oKpClLf2Au