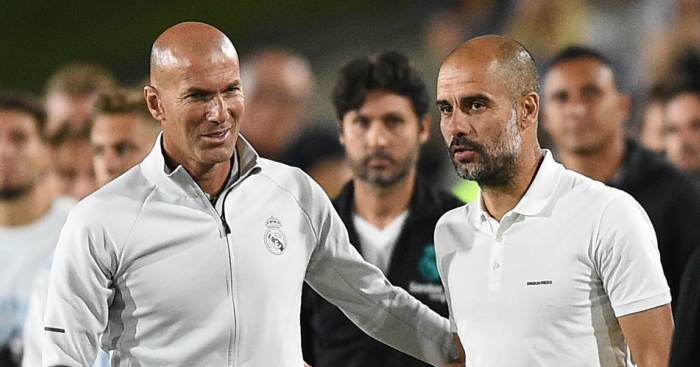 Zinedine Zidane has responded to Pep Guardiola trying to drag Real Madrid into his complaints about referees.

Guardiola could face a three-match UEFA ban after being sent to the stands during Manchester City’s Champions League quarter-final exit to Liverpool.

City were beaten 2-1 on the night and 5-1 on aggregate, with Guardiola sent off after remonstrating with referee Antonio Mateu Lahoz.

Guardiola made no attempt to disguise his dissatisfaction with Lahoz’s officiating, with Leroy Sane having a crucial first-half effort controversially ruled out.

The Spaniard even cited a situation from last season where Real Madrid benefited from a sending off against Bayern Munich in the quarter-finals.

“Last year, [Viktor Kassai] sent Vidal off unfairly at a time when Bayern were on top. This type of decision makes a difference,” he said.

But Zidane has refused to engage in the discussion.

“I’m not going to say anything to him, I’m not interested in what Guardiola says,” said Zidane.

“We went through last year and won the Champions League, but I never mess with the referees, and I’ve had the chances to do so.

“A referee’s job is hard. Sometimes it goes in your favour, other times against. I never get involved, and in any event, it was a penalty.”