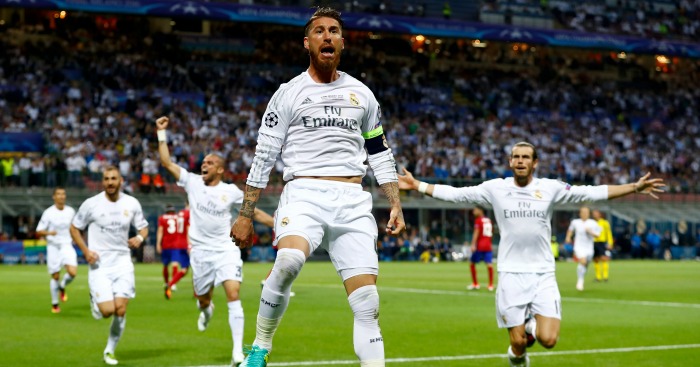 Real Madrid have won the Champions League final, defeating Atletico Madrid 5-3 in a penalty shoot-out in Milan. The teams were level 1-1 at 90 minutes, and after extra time.

Two years ago Atleti were denied victory in the final against the same opposition by a Sergio Ramos equaliser three minutes into added time as Real went on to win ‘La Decima’.

Similarly dramatic scenes were repeated in Milan’s San Siro stadium after substitute Yannick Carrasco cancelled out Ramos’ first-half effort as it ended 1-1 after extra time and it was entirely predictable Ronaldo, who barely had an impact on the game in the preceding 120 minutes, would be the man to steal the limelight.

As a result coach Zinedine Zidane, who only took over from sacked Rafael Benitez in January, became a Champions League winner as both a player and manager with the same club.

It was devastating for Atletico, who had their chances in normal time with 33-goal forward Antoine Griezmann blasting a penalty against the crossbar early in the second half.

They did everything to drag themselves back into the match having fallen behind early on.

He became the first defender to score in two Champions League finals and joined forwards Lionel Messi, Samuel Eto’o and club-mates Cristiano Ronaldo and Raul in achieving the feat.

Coincidentally it was also his first Champions League goal since the 2014 final but instead of inspiring his side to greater deeds the opposite happened.

What followed was a very un-Real performance as they sat deep with men behind the ball and allowed their city rivals to dominate possession.

The plan seemed to be to deny Atleti the space to run in behind them, almost turning their opponents often used tactics against them, and it worked up until half-time with a couple of long-range efforts from Griezmann the best they could muster.

Carrasco replaced Augusto Fernandez at the break as Simeone adjusted his game plan and it paid immediate dividends as Pepe clattered Fernando Torres from behind to concede a 48th-minute penalty.

Griezmann, who had supplied the pass for Torres, stepped up but blasted the ball against the crossbar. The Frenchman has missed only two penalties this season and both were against Keylor Navas.

It could have been a pivotal moment but Atleti, a team moulded in Simeone’s image, are made of stern stuff and they came back with Stefan Savic stabbing wide, Koke swerving a shot on the angle just wide and Saul Niguez hooking a volley past the far post.

The actual pivotal moment came with 20 minutes to go as, after Oblak had denied Karim Benzema on the counter-attack, Bale’s shot was cleared off the line after Ronaldo, who had suffered an injury scare earlier in the week and was largely a peripheral figure until the game opened up in the final quarter, had been denied by the Atleti goalkeeper.

Conceding a second goal at that point would more than likely have been fatal to Atleti’s hopes but they continued to dominate and were rewarded 11 minutes from time when Carrasco arrived at the far post to convert Juanfran’s cross.

The 22-year-old celebrated becoming the first Belgian to score in a Champions League final by running to kiss girlfriend Noemie Happart – a former Miss Belgium – after picking her out in the crowd.

Torres turned another Juanfran cross into the side-netting as Atletico threatened to snatch it before the onset of extra time but even a further 30 minutes could not produce a winner.

Real were impeccable in the shoot-out with Lucas Vazquez, Marcelo, a cramp-riddled Bale, Ramos and Ronaldo all scoring while Griezmann, Gabi and Saul were successful with theirs as Juanfran was the only man to miss.