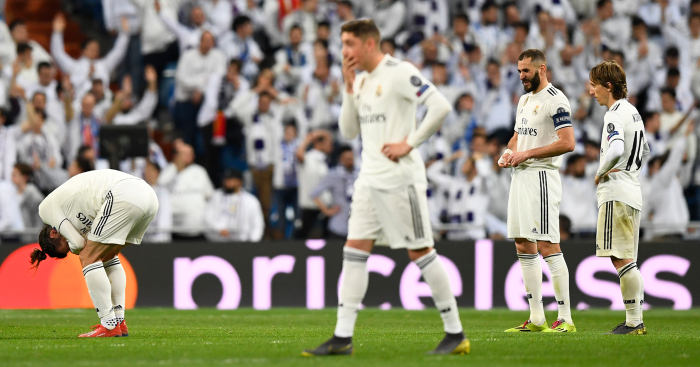 If the secret to good comedy is timing, Zinedine Zidane might belatedly prove to be football’s greatest ever funny man. The joke he started telling ten months ago finally has its emphatic punchline.

The Frenchman waited just five days after re-writing history to voluntarily become part of it. “I have taken the decision not to continue as coach of Real Madrid next year,” he told a stunned press conference in May after becoming the first manager to win three consecutive European Cups.

“I think it is the moment, for me and for the squad,” he added. “I know it is a bit of a strange moment but I think it is the right moment. I want to win and if I don’t see clearly that we’re going to keep on winning, then it is best to change and not do anything stupid.”

Foresight is a wonderful thing. But while Zidane anticipated a third straight Champions League crown as the zenith of this rollercoaster, few could have possibly imagined the nadir being quite so devastating, so stark and so absolute. Real were powerless as Ajax committed regicide against the kings of Europe on Tuesday.

The Dutch side did not even knock; they hardly had to. Real greeted them at the door, welcomed them into their Bernabeu home and embraced them like old friends to such an extent that captain Sergio Ramos deliberately earned a booking in the first leg so as to serve a suspension for the second and be available in the quarter-finals. His subsequent extra one-match ban will rule him out of the first game of next year’s competition, provided the club can make it that far without self-imploding.

Real could have done with his particular blend of defensive leadership, particularly with Raphael Varane exhibiting the sort of form that would put off even Jose Mourinho. One of the best centre-halves in world football looked positively ordinary against the pace of David Neres, the agility of Hakim Ziyech and the skill of Dusan Tadic.

He was not alone. Frenkie de Jong wrestled the midfield torch from Luka Modric’s limp grip, Matthijs de Ligt dealt with Karim Benzema and Gareth Bale with the silent and unerring efficiency of a trained assassin and Donny van de Beek was the most endearing and effective supporting act since The Beatles opened for Brenda Lee in Hamburg in 1962.

This is a script that has been written time and time again, of course. Eight of Ajax’s starting XI are aged 26 or under, with the phenomenal Tadic, the goalscoring Lasse Schone and the dependable Daley Blind the only exceptions. Europe’s vultures do not let such youthful vibrancy go untapped for too long. De Jong is already headed to Barcelona this summer, and there is only so much the club can do to slow down the conveyor belt.

The irony is that Real are exactly the kind of club who will need to pick at the carcass. This is a side that has made seven permanent signings since the summer of 2016, one of whom has already been sold (Alvaro Morata), with another loaned out (Theo Hernandez). Of the remaining quintet, Dani Ceballos was an unused substitute on Tuesday, and Alvaro Odriozola and Mariano have long been exiled from Santiago Solari’s squad. Thibaut Courtois was an unnecessary and thus far unsuccessful addition, while only Vinicius Junior has shown signs of immense promise; he was taken off after 35 minutes due to injury.

Real have spent around £180m over the past three years on a loft conversion and conservatory, only to discover that their living room is ablaze and their kitchen has been ransacked. Zidane and Cristiano Ronaldo were always going to leave eventually, making the club’s complete lack of foresight and planning look amateurish.

Fingers will be pointed, first and foremost at the unpopular Bale. But he is merely a symptom of the wider disease afflicting a club too proud – perhaps too fearful – of visiting a doctor. Real need to rip up the template and start again instead of relying on an inspirational manager and incredible striker who both left long ago.

Yet they have remained belligerent throughout this horrible season, for that is the only way they know how. As far back as February 12, Courtois noted that “everyone in the squad aspires to winning the lot, and we’ve already won the Club World Cup”. But these magpies will have to make do with that solitary piece of meaningless silver after being knocked out of two cup competitions and losing further ground in the league in the space of six crushing days.

It is the first time Real have exited Europe to a team outside the top five domestic leagues since Dynamo Kiev in 1999, and the first time they have lost four consecutive home games since 2004. Their unfathomable reign atop this precarious peak is over.

As far as papering over the cracks go, a hat-trick of consecutive Champions League titles was quite the effective layer of plaster. But Real have been creaking for some time. They just chose to be blinded by the glare of their latest trophy, while Zidane saw the light.