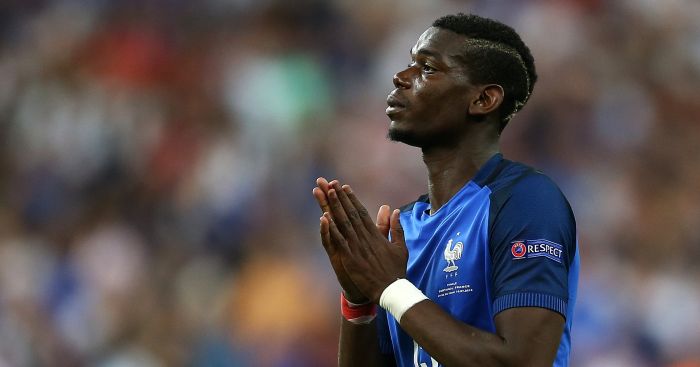 Real Madrid boss Zinedine Zidane has plenty of time for the talents of Paul Pogba, but insists his own current squad is “difficult to improve”.

France midfielder Pogba has been linked with a big-money move away from Juventus, with a return to former club Manchester United reported to be in the pipeline as new Red Devils boss Jose Mourinho looks to further bolster the team.

The European champions, meanwhile, are also long-term admirers of the 23-year-old, who left Old Trafford in July 2012 after rejecting a new contract offer.

Madrid are currently at a pre-season training camp in Canada ahead of the International Champions Cup game against Paris Saint-Germain, and Zidane wants everyone’s focus on the job in hand rather than who could yet come into the club over the closing weeks of the summer transfer window.

“I am happy with the squad I have got and it’s difficult to improve on it,” Zidane said, according to AS English. “Do I like Pogba? Of course, he’s a very good player and every club wants the best players, but right now he’s at Juve and we have a large squad already.

“There are still lots of players yet to join up with the squad and with the Euros going on we couldn’t do anything.

“We have three games coming up and that’s the focus at the moment.”

Striker Alvaro Morata returned to Madrid earlier this summer on a £25million buyback option from Juventus.

However, the Spaniard is said to be on the radar of new Chelsea manager Antonio Conte as the debate continues about his exact role within the squad.

Zidane, though, gave no suggestion he was ready to quickly offload the player.

“He is another member of this team. He’s back and I’m happy to have him,” Zidane said when quizzed on Morata’s future.

“He is an academy product, who knows what Real Madrid is and truthfully we are, and me above all, happy to have him with us. Later we’ll see…

“We have a large squad and all the players will be important. Alvaro will be one more of the team.”

“A large squad gives you a few more problems but that comes with the territory as Real Madrid coach,” he said.

“I have to play the most competitive side I can and I’ll do the same thing this season, that’s my responsibility.”