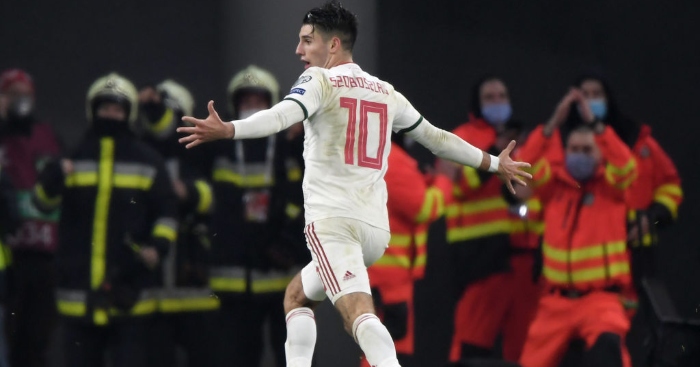 Real Madrid have joined the race to sign Red Bull Salzburg star Dominik Szoboszlai, who has been linked with Arsenal, according to reports.

The midfielder came through the ranks with Austrian second division side, Liefering. They are a feeder club to RB Salzburg, and he made his debut for his new team during the 2017/18 campaign.

The 20-year-old has established himself as one of the brightest young prospects in Europe during his time in Austria.

MAILBOX: Who’s a Man Utd bungalow? And the worst injury crises ever…

Szoboszlai made 40 appearances for them last season, as he got 12 goals and 18 assists in all competitions.

He has carried on that great form into the 2020/21 campaign. The youngster has five goals and nine assists from 13 outings, which includes two goals in the Champions League group stage.

The midfielder has been capped eleven times for Hungary. He scored a last-minute winner for his country against Iceland this week to send them through to next summer’s European Championships.

This form has seen him linked with a move to Arsenal in January. The Gunners reportedly see him as a cheaper alternative to long-term target Houssem Aouar.

But they face heavy competition to sign him. Spanish outlet AS have reported that Real Madrid are now also very keen to sign him.

The Spanish giants reportedly see him as a direct replacement for Isco, who has fallen out of favour with Zinedine Zidane in Spain.

It is reported that Szoboszlai’s contract includes a £25m release clause. This means interested clubs will be eager to get a deal done before his price-tag skyrockets in a few months.