Reguilon was voted the best left-back in La Liga in the 2019/20 campaign. 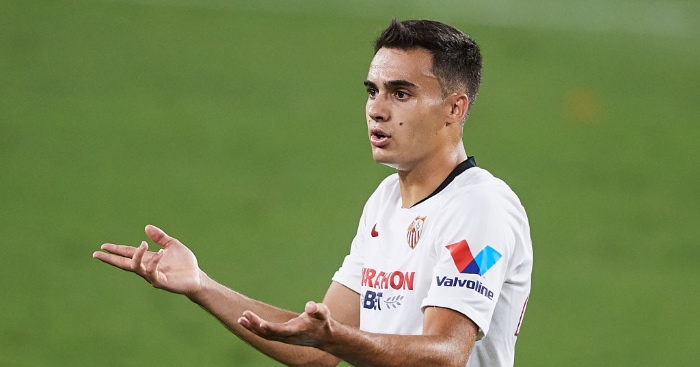 Sergio Reguilon admits he is flattered by reports linking him with a summer move to Chelsea and Everton.

The 23-year-old has proved one of the stars of the season during his loan to Sevilla. Indeed, the Real Madrid man was voted as the best left-back in LaLiga over the 2019/20 campaign.

The Spaniard played 31 times in LaLiga to help his side finish fourth and qualify for the Champions League.

FEATURE: Leeds win the Double; Burnley in a Euro final; West Ham down

Earlier reports suggested Tottenham were the early frontrunners to sign Regulion. However Everton made the first firm move last month with an £18million bid.

However, Chelsea now appear very much in the driving seat and the player could be brought in as an alternative to Ben Chilwell.

Chilwell is valued highly by Leicester and would cost the Blues around £50m.

Given they want to add Kai Havertz to Hakim Ziyech and Timo Werner, the chance to sign Reguilon does make sense.

Reports earlier this week said the Blues were prepared to better Everton’s offer to Real for Reguilon.

Now, having been questioned about links to Chelsea, Reguilon admits he’s flattered by the £22.5m interest.

However, he says his only focus remains on helping Sevilla to Europa League success.

Asked about Chelsea’s interest, he told Marca: “If my year at Sevilla had not been good, then this would not be happening. These teams would not ring.

“If I am fine, the team is fine and the club is fine, everyone is happy.

“But I do not think about these possibilities now – I’m sorry if that sounds like a cliche.

“I’ve been saying since quarantine that until the season isn’t over I won’t be talking about my future.

“Until then it would be unfair on myself, my teammates and club.

“I have no complaints about anything, about the city, the club, my colleagues. I feel very loved. Who knows what will happen in the future.”