Home All The News Zidane promises trophy after replacing Rafa 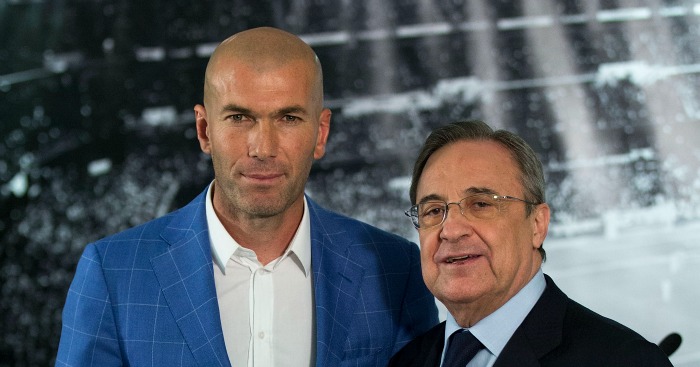 Zinedine Zidane has vowed to win a trophy this season after replacing Rafael Benitez as Real Madrid manager.

The 43-year-old World Cup winner and former Real and France superstar was unveiled by club president Florentino Perez on Monday evening after the Spanish giants confirmed that Benitez had been relieved of his duties just 25 games into his reign.

Speaking at a brief press conference, which finally got under way almost half an hour after the scheduled start time, Zidane said: “I want to thank the club and thank the president for giving me the opportunity to train this club.

“It’s the best club in the world with the best fan-base in the world. I want to do my very best to ensure that this club at the end of the season will have a trophy.

“I will be working hard with all the players and I think it will go well. I am looking forward to working with everybody tomorrow. Tomorrow is when the work starts.

“Thank you to everyone. It is an important day for me, it’s an emotional day, even more emotional than the day I signed as a player for the club.

“I will put all the heart I have into this job for the club. Thank you very much.”

Zidane, who had been working as manager of the club’s B team Castilla, inherits a side sitting in third place in the Primera Division table after Sunday’s 2-2 draw at Valencia.

However, Benitez’s tenure drew to a premature close after months of speculation that he would not come anywhere near seeing out the three-year contract he signed in June last year amid dissatisfaction among fans unhappy with both the departure of predecessor Carlo Ancelotti and his style of play, and rumours that he was at odds with key figures within the dressing room.

Perez paid tribute to the 55-year-old former Liverpool boss as “an absolute professional and a wonderful person”, before handing responsibility for reviving the club’s fortunes to Zidane.

He said: “Zinedine Zidane is a man who knows better than anyone what it means to stand at the front and lead Real Madrid.

“Zidane, you are from this moment the trainer, the manager of Real Madrid. The word ‘impossible’ does not exist for you, Zinedine Zidane.”

No details of Zidane’s contract were revealed during the press conference and the new manager and the president will speak to the media once again on Tuesday as preparations for his first game, which sees Deportivo La Coruna head for the capital on Saturday, begin in earnest.

The former France international was linked with the job in November amid the fall-out from an humiliating 4-0 home defeat by arch-rivals Barcelona, insisting at the time that he was not ready to step up to first-team level.

However, he appears to have re-evaluated his position and now faces the task of reviving a season which has far from turned sour, but has by no means gone to plan.

Real currently trail leaders Atletico Madrid by four points after 18 games and have been drawn against Italian side Roma in the last 16 of the Champions League, which resumes next month.

However, they have been thrown out of the Copa del Rey for fielding an ineligible player – suspended winger Denis Cheryshev – in the 3-1 fourth round victory at Cadiz, with an appeal having been rejected.