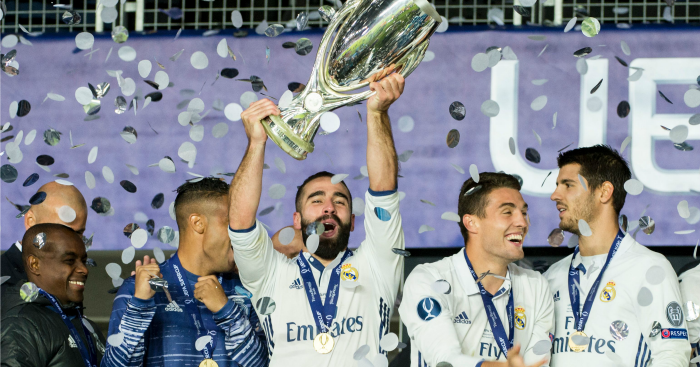 Dani Carvajal was the unlikely hero as he fired Real Madrid to a Super Cup victory over 10-man Sevilla with a brilliant extra-time winner.

The full-back struck with a penalty shoot-out looming, running from near halfway before drilling the ball past Sevilla goalkeeper Sergio Rico with the outside of his right foot to earn Madrid a dramatic 3-2 win in Trondheim.

Madrid were trailing 2-1 deep into stoppage-time at the end of 90 minutes when skipper Sergio Ramos headed them level, and Carvajal made the most of their escape.

Sevilla substitute Yevhen Konoplyanka looked to have won it with a coolly-taken 72nd-minute penalty as the Andalusian side – who have now lost three Super Cup games on the trot – bounced back from 20-year-old Madrid debutant Marco Asensio’s stunning opener.

The Europa League winners hit back through Franco Vazquez before the break to set the stage for Konoplyanka’s contribution, only for Ramos, who had conceded the penalty, to make amends right at the end of regulation time.

Madrid, who were without Cristiano Ronaldo and Gareth Bale and started with Karim Benzema and Luka Modric on the bench, were quickly out of the blocks in the all-Spanish encounter with wide-man Asensio prominent in the early stages.

He gave Rico no chance with 21 minutes gone when he picked up possession 25 yards out and unleashed a left-foot shot which screamed past the keeper and nestled in the top corner to open the scoring.

Madrid keeper Kiko Casilla had to turn away Daniel Carrico’s drive from distance as it reared up off the turf ahead of him on the half-hour, but he was beaten four minutes before the break when Franco Vazquez, a £12.8million summer signing from Palermo, drilled a left-foot shot across him and into the bottom corner.

Rico came to the rescue when he kept out Isco’s header from Lucas Vazquez’s cross two minutes later with Madrid looking for an instant response, and the sides went in level at the break.

Madrid boss Zinedine Zidane introduced Benzema as a 62nd-minute replacement for Alvaro Morata and both the newcomer and Ramos went close in quick succession, but it was Sevilla who took the lead for the first time with 18 minutes remaining.

Vitolo lured Ramos into an ill-advised challenge as he cut inside into the penalty area and Serbian referee Milorad Mazic pointed to the spot, handing Konoplyanka – who had been on the pitch for less than five minutes – the chance to calmly send Casilla the wrong way.

Ramos repaid the debt to his team-mates deep into injury time when Lucas Vazquez delivered the perfect cross for him to head home a priceless equaliser against his former club.

He then saw a spectacular second goal harshly disallowed in extra-time after Sevilla defender Timothee Kolodziejczak had been sent off for a second bookable offence, and Rico made fine blocks to deny substitute James Rodriguez and Lucas Vazquez as time ran down.

But there was nothing the keeper could do to deny Carvajal with barely a minute remaining when stole back possession, raced forward from the right and stabbed an audacious shot into the net to snatch victory.