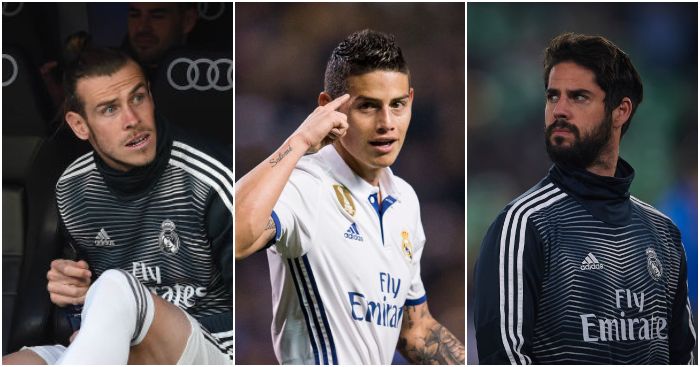 Real Madrid have splashed out over a quarter of a billion pounds already this summer, and we’re not even at the end of June. What’s more, there are more big money transfers planned, with Paul Pogba, Christian Eriksen, Kylian Mbappé and Neymar all linked with Los Blancos. To make room in the squad and to keep the FFP police off their tail, they’ll need to sell a bunch of players. Here, we look at ten of the most likely candidates:

Gareth Bale – valued at €80m (all valuations according to Marca)

Potential destinations: Manchester United, Paris Saint-Germain
It’s six years since Bale joined Real Madrid in what was then the most expensive transfer of all time, and while his stay in Spain has been successful in terms of trophies, he has struggled to win over the fans on account of his patchy form and fitness and a perceived failure to adapt to the way of life. His time at the club appeared to be drawing to a close even before the return of Zinedine Zidane, and now that the Frenchman is back Bale’s exit seems certain. The big question is, who will take a gamble on an injury-prone 30-year-old on astronomical wages? Paris Saint-Germain may be tempted, and Manchester United may roll the dice on Bale if they haven’t learned their lesson from the signing of Alexis Sánchez. Failing that, it will have to be China or the USA. Somewhere with good golf courses, preferably.

Potential destinations: Paris Saint-Germain, Porto, Inter, Roma
Navas has enjoyed tremendous success at the Bernabéu since his move from Levante five years ago, but the Costa Rica stopper now wants to move on rather than play second fiddle to Thibaut Courtois. He is undoubtedly a saleable asset, and a transfer would be beneficial for all parties: the player, the selling club and the buying club. A keeper of his calibre who is still relatively young for his position should have clubs queuing up to try and sign him, and the likes of Inter and PSG have been suggested as potential suitors. Either Ukraine’s Andriy Lunin or nepotism’s Luca Zidane will step up to take his seat on the Madrid bench next season.

Potential destinations: Napoli
A huge signing for Real Madrid following an impressive World Cup campaign with Colombia in 2014, James never really hit the heights expected of him at the Bernabéu. Like Bale, his relationship with Zidane seems to be irrevocably damaged, and although his two-year loan spell at Bayern Munich has hardly been spectacular, his obvious talent and relative youth mean that Real Madrid can charge a pretty penny for him as his inevitable exit looms. There have been links with Arsenal and Manchester United among others, but a move to Napoli to link up with Carlo Ancelotti for a third time seems the most logical outcome.

Potential destinations: Chelsea
Time is running out for Chelsea to seal a permanent deal for the Croatian midfielder after his season-long loan at Stamford Bridge, as their transfer ban is due to kick in on June 30. Real Madrid are keen to get the move sorted as soon as possible, and if the reported price of €50m is to be believed, who can blame them? Kovacic is clearly surplus to requirements at Madrid, so this princely sum will be a tremendous bonus for Florentino Pérez as he looks to balance the books after his recent splurge.

Potential destinations: Milan, Bayer Leverkusen, Napoli
Signed two years ago from city rivals Atlético for €24m following an impressive loan spell at Alavés, Theo has so far failed to break into the Madrid first team in any meaningful way, and spent last season on loan at Real Sociedad. With Marcelo, Ferland Mendy and Sergio Reguilón blocking his path into the first team, the 21-year-old looks likely to move on loan or with a buy-back clause to Milan, as Madrid are unwilling to cut ties with a player of such great potential. It seems like a smart move for Madrid to convert their fourth-choice left-back into cash at this moment in time, but don’t be surprised to see him back at the Bernabéu at some point in the future.

Potential destinations: Bayer Leverkusen, Real Sociedad
Brought to the club at 16 years of age, the erstwhile greatest prospect in world football’s progress has been somewhat stunted ever since. He has impressed in two loans spells in the Eredivisie, and is still only 20, but he’s not quite at the level to be challenging for a first-team place in the Spanish capital just yet. Another loan move seems sensible, with Bayer Leverkusen and Real Sociedad both keen, but reports suggest Ødegaard himself would prefer a permanent move. Perhaps a deal with a buy-back clause would be an agreeable compromise here.

Potential destinations: Manchester United, Manchester City, Juventus
It’s been a difficult season for one of the most frustrating players in Spanish football. His falling-out with Santi Solari was legendary, and there were reports that he downed tools in training and was deemed too overweight to play. He is an outrageous talent, and on his day he can be unplayable, but he needs the right conditions to flourish. With Eden Hazard already in the bag and a move for Christian Eriksen in the offing, will there be a place for Isco in Zidane’s squad? It may be better to cash in now while he is in demand, and given than his reported suitors include both Manchester clubs, Madrid will be confident of selling for around the £70-£80m mark.

Potential destinations: Inter, Arsenal
It’s understood that Real Madrid will entertain offers for Spain winger Vázquez as their squad renovation programme takes hold. He would be a useful player to keep hold of given he is always willing and hard-working, and can play at right-back as well as on the wing or in attack, but at 27 it may be time for him to move elsewhere for regular football. Inter seems the most likely destination given Arsenal’s money woes, and a fee of around €30m would probably do the trick.

Potential destinations: Spurs, Arsenal, Sevilla, Milan
The supremely talented midfielder was signed from Real Betis two years ago after winning player of the tournament at the European Under-21 Championship, and is currently in Italy lighting up the 2019 edition of that tournament with his stellar performances in the middle. His quality has never been doubted, but he has still found it hard to break into the first team under a succession of managers. At just 22 years of age, he could be a bargain at the quoted €50m, but of the interested clubs only Tottenham and Milan look like they would be able to stump up the cash at this point in time.

Potential destinations: Fenerbahçe, Valencia
Mariano was Florentino Pérez’s cheap option last season, brought back to Madrid from Lyon for €21m to help make up the shortfall of goals that would inevitably follow Cristiano Ronaldo’s departure. A combination of injuries and a lack of first-team opportunities prevented him from having any real impact, and he mustered only three goals in 13 league appearances. The plan failed, and it may have had some bearing on Pérez’s decision to splash out this summer. The signings of Luka Jović and Eden Hazard have pushed Mariano towards the exit door, with Turkey his most likely destination.