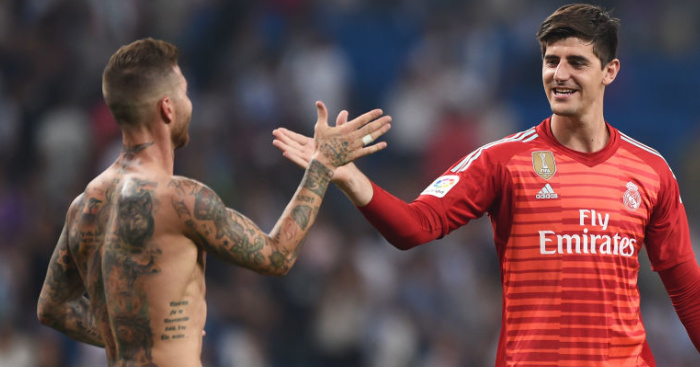 Real Madrid goalkeeper Thibaut Courtois has taken a swipe at his former Chelsea team-mates by claiming that he’s playing at a higher level now.

The Blues made a £23million profit when they sold the Belgian to the La Liga giants for £31m this summer.

The Stamford Bridge outfit then shelled out £71m to bring in Kepa Arrizabalaga from Athletic Bilbao in his place, a new world-record amount for a goalkeeper.

Courtois displaced Keylor Navas on Saturday to make his debut in Real’s 4-1 victory over Leganes.

And after the victory the 26-year-old aimed a few barbed comments at Chelsea, as reported in the Daily Star.

“I get on with everyone very well, the communication with the defence is going well, even during the competition,” Courtois said.

“In training, you see that the level is high.

“I am now experiencing on a daily basis that Sergio Ramos is the best centre-back in the world.

“The level [at Real Madrid] is higher than at Chelsea.”

Courtois also spoke about the differences between the Bernabeu and Stamford Bridge.

He added: “It’s twice as big, of course, it’s a very different feeling.

“If you look forward, you only see a wall of people while at Stamford Bridge you can still see the sky or the hotel behind the grandstand,” he said.

“Of course, this was not the first time I’ve played here.

“The first few minutes [against Leganes], I was stunned, but then I felt right.”