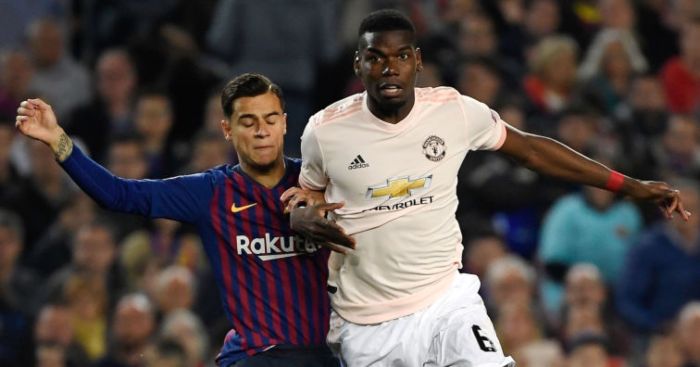 Paul Pogba
Manchester United do not have a faultless past when it comes to club-record signings. While previous expensive purchases helped lay historic foundations, from Denis Law in 1962 to eight successive successes between 1981 and 2001 in Bryan Robson, Mark Hughes, Gary Pallister, Roy Keane, Andy Cole, Jaap Stam, Dwight Yorke and Ruud van Nistelrooy, their modern transfer shortcomings have been typified by expensive mistakes.

Rio Ferdinand and Dimitar Berbatov are the exceptions to a rule drafted by Juans Veron and Mata, and cast in iron by Angel di Maria and Paul Pogba.

The former might just edge out the latter when it comes to Old Trafford disgruntlement. But it is difficult to see much of a way back for Pogba now, not least because both parties have been consciously uncoupling for most of the season. The club are proudly parading their new partner in public; the player is too busy living his life to notice or care.

For the first time, both United and Pogba seem ready to move on. Some relationships simply are not compatible – most would not survive more than a few days with Mino Raiola as the third wheel – and despite one granting a world stage and a chance at redemption in exchange for the other’s offer of high-level performance and marketability, too many promises have been broken on either side. But which of United or Pogba gets to keep Stormzy?

Kepa Arrizabalaga
Perhaps it was not celebrated eat Stamford Bridge, a nondescript smoky tactics room in Turin or the Arrizabalaga household, but the one-year anniversary of Kepa’s most enduring moment at Chelsea came on Monday. Until recently, it felt as though that flashpoint in the 2019 League Cup final would be his lowest ebb in west London.

Twelve months on, he is suffering from severe Willy envy. Kepa’s last game for Chelsea came on January 21, with Caballero conceding eight times in four matches since. That would suggest an issue deep enough to require more than the cosmetic surgery that is changing the goalkeeper, but this seems a more permanent course of action than first envisaged.

So much so that the belief is Frank Lampard wishes to cash in on Kepa no more than two years after his predecessor made the Spaniard the world’s most expensive goalkeeper.

Chelsea will be reluctant to grant that wish due to issues ranging from amortisation to replacements, but you can see the manager’s argument. A save percentage of 53.6% is actually impressively incompetent even before you take into account transfer fees and wages. If only they already had Petr Cech and Carlo Cudicini employed in executive roles to help out as goalkeeping coaches. Or goalkeepers.

Philippe Coutinho
It is no reflection on Philippe Coutinho to describe his move to Barcelona as among the worst transfers ever. While he has adorned a previously bare medal collection with two La Liga titles, neither were earned with him as anything close to a talisman. And his former side have enjoyed European and world glory at the direct expense of his new club.

A loan move to Bayern Munich has done little to assuage the situation. Chief executive Karl-Heinz Rummenigge described him this week as having given “the impression of being a little inhibited” during his time in Germany. It seems unlikely they will activate the purchase option in his contract.

Which leaves Coutinho, once the world’s most coveted talent, approaching a career crossroads this summer. Liverpool have outgrown him, Barca have pursued a different direction, nine players have featured more often for Bayern this season and precious few clubs can afford him. Won’t someone just give him 25 yards, adequate space and sight of a crossbar?

Hirving Lozano
It seemed as though Hirving Lozano had taken a rare but welcome sensible approach to his World Cup showcase. Mexico’s last-16 exit to Brazil in 2018 did little to dampen the excitement or expectation generated by the winger’s goal in the win over Germany. But he chose to stay in the Eredivisie for one more year to hone his craft and attempt to add to his one league title.

He failed to achieve the latter – PSV finished three points behind that irresistible Ajax side – but the extra season in the Netherlands seemed to set Lozano up well. He was the league’s fourth highest goalscorer from out wide, making his mark in Europe with goals against Tottenham and Inter.

Yet the anticipated move has been a disappointment. Lozano did not even make Napoli’s match-day squad for Tuesday’s visit of Barcelona, with Gennaro Gattuso explaining that “has to work harder” as “I have no space for him in my team”.

With three goals and two assists in 23 games, it is difficult to argue. Lozano, linked with Everton, has not been on the winning side in a Serie A game since September. There is no risk of confusing Nutella with sh*t here.

Oliver Burke
Much like when a loved one advises you to go and get that potential medical issue checked out, The Sun are to be ignored when it comes to stories about Liverpool. Or football. Or anything. Yay.

But their suggestion of Oliver Burke-related Jurgen Klopp fury in the summer of 2016 really does look rather suspect in hindsight. He signed Sadio Mane instead. It has worked out fairly well.

Not for Burke. After a year or so at Leipzig trying to avoid Klopp’s wrath, he returned to England as the successor to Nacer Chadli’s throne of West Brom’s most expensive player ever. The last of his two league starts for the Baggies came in March 2018. Bloody Tony Pulis/injuries.

A loan at Celtic did little to salvage his reputation, despite scoring four goals in seven Premiership starts. A spell with Alaves in La Liga has been similarly indifferent, and he will return to rthe Hawthorns this summer with two years left on his contract and a future perhaps less certain than it ever has been.

In the 22-year-old’s own words this week: “I’d like to find a club where I can settle and play week in, week out, find my confidence again, to prove all the doubters out there wrong.” It ain’t easy following in Chadli’s footsteps.