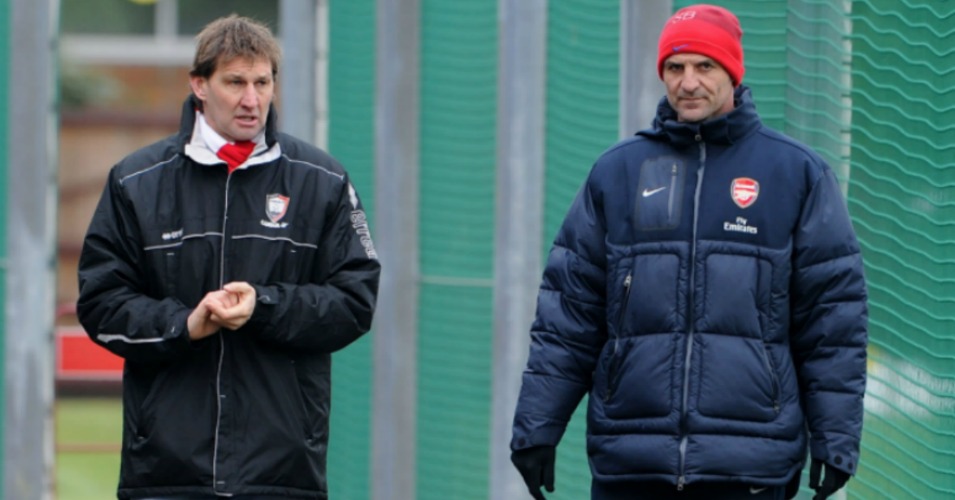 Harry Redknapp has tipped Steve Bould or Tony Adams to succeed Arsene Wenger at Arsenal and John Terry to take over from Jose Mourinho at Chelsea.

In his weekly London Evening Standard column, Redknapp has once again lamented the lack of opportunities handed to young British coaches, and has asked why Arsenal assistant Bould or legend Adams can’t succeed Wenger when the Frenchman leaves his post as manager, or why Chelsea captain and non-manager John Terry can’t take over at the club once Jose Mourinho leaves.

‘There are a lot of very talented young British coaches out there who need to be given a chance,’ Redknapp ‘wrote’ for the Evening Standard. ‘With all due respect, if you swapped an English lad at the bottom of the table with Manuel Pellegrini at City and gave him Yaya Toure, Sergio Aguero and David Silva, they aren’t going to finish halfway up the League.

‘And equally, Pellegrini won’t suddenly take a bottom-six team and get them into the Champions League. It just doesn’t work that way.

‘Take the top four clubs. People talk about Chelsea maybe replacing Jose Mourinho, Arsene Wenger won’t go on too much longer at Arsenal, Pellegrini is always under pressure at City and Louis van Gaal says it will be his last job at Manchester United. It is almost impossible to see a British coach getting one of those jobs when they come up though.’

‘Look at Alan Pardew,’ he continues. ‘He’s done a superb job at Crystal Palace. Put him in charge of City and I think there’s every chance he could win the League with them. But he might never get the chance.

‘Why shouldn’t Arsenal give Steve Bould a go? Or Tony Adams? Why shouldn’t John Terry be the next Chelsea manager whenever Mourinho goes? Okay, he has never managed but John knows the game inside out.

Blaming those foreigns, Redknapp added: ‘There are more and more foreign owners in the League who are too afraid to take a chance on an English manager. They want sexy foreign names. They love the mystique of it.

‘British coaches are barely getting a look-in even lower down the League now. Eddie Howe had to bring Bournemouth up into the top flight. Alex Neil had to do the same at Norwich. Tony Pulis has done well but he would have never managed in the Premier League if he hadn’t got promoted with a club. That was his only way in.’