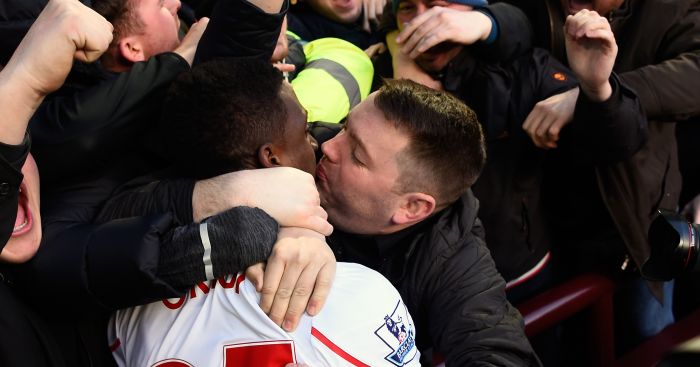 Divock Origi says he appreciated the love shown to him by Liverpool supporters during his goal celebration in their 6-0 win over Aston Villa on Sunday.

The Reds striker slotted home just 37 seconds after coming off the bench – the fastest goal by a substitute in the 2015-16 Premier League season – before heading off to party with the supporters in the away end.

However, Origi got more than he bargained for as he was grabbed by one Liverpool fan, who was keen to show his appreciation by planting several kisses on the Belgian’s cheek.

But the 20-year-old was glad he could reward the fans by sharing his goal celebrations with them.

“Let’s say he was emotional!” Origi told Liverpoolfc.com. “I could feel the love, definitely.

“I turned and the first thing I saw was the fans. They were so happy and I wanted to celebrate with them.

“I think maybe on Valentine’s Day they were a little bit more emotional so I had some kisses, but it was nice to see.

“I think the supporters of Liverpool are very passionate and for us to be able to give something back to them is wonderful. I think it’s a big plus for the club also.”

Must be valentines day.. ? #YNWA pic.twitter.com/3o7LQG9sZe