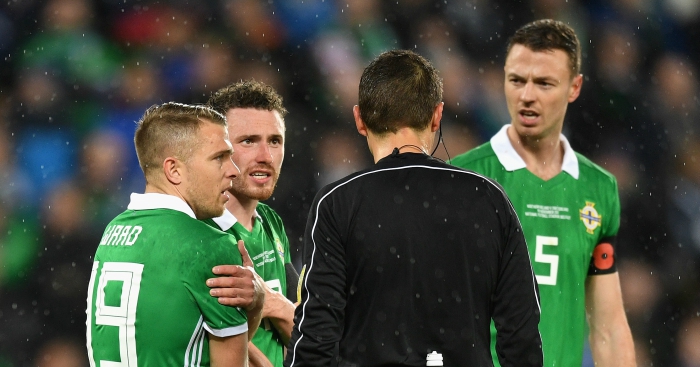 The referee that awarded a controversial penalty against Northern Ireland in their World Cup play-off defeat to Switzerland admits he “made a mistake”.

Northern Ireland slipped to a 1-0 defeat over two legs of their play-off against Switzerland to determine who would reach next summer’s World Cup in Russia.

The only goal that separated the two sides in 180 minutes was a penalty scored by Ricardo Rodriguez in controversial circumstances.

Corry Evans was adjudged to have blocked a shot with his arm in the first leg at Windsor Park, with referee Ovidiu Hategan awarding the spot kick.

Replays showed the ball hit Evans on the shoulder however, and “Romanian gypsy c***” Hategan was left to take the flak.

“It was a sad and unpleasant moment for me, sad because I made that mistake,” said Hategan, who confirmed he was not one of the 36 referees selected for 2018 World Cup duty.

“Unfortunately I’m not among the 36, but I’ll see if I’m going to be a video referee,” he added.

“Surely it has had a big influence and what happened in the play-off game. It’s not a secret and I’m not hiding behind words.

“In our world, the referees are the same as the goalkeepers – a mistake is always seen.

“I’ve got over that moment, I’m a strong man. My family were there for me.”