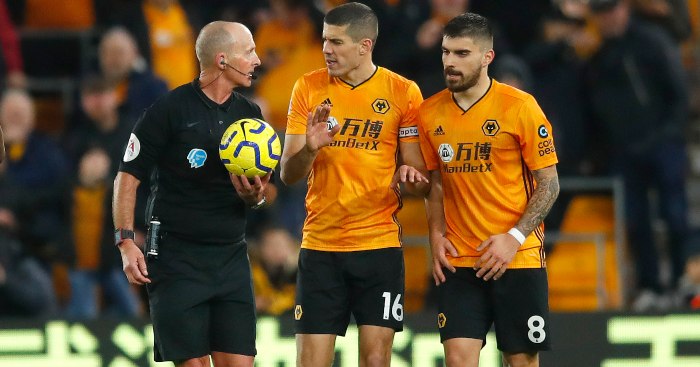 Nuno Espirito Santo’s side were held to a goalless draw by 10-man Leicester on Friday after Willy Boly’s goal was disallowed.

The defender’s first-half header was chalked off after a video review showed Pedro Neto’s ankle was offside in the build-up.

It was the second time this season Wolves had seen a goal ruled out by VAR against Leicester after Leander Dendoncker’s strike in the 0-0 draw on the opening day of the season was also disallowed.

“We felt it was cruel at their place as well. I don’t want to speak about VAR too much. I’ve spoken about it before and it doesn’t really get you anywhere.”

Wolves, who sit seventh in the Premier League, still could have won after Hamza Choudhury was sent off 14 minutes from time for receiving a second yellow card, with Raul Jimenez heading wide and Kasper Schmeichel denying Adama Traore.

“It wasn’t the fact they were down to 10 men, it was the fact that we kept on going, we kept on playing how we want to and showed our character.”

"I thought we were fantastic."
"We did enough to win the game."
"We don't understand the VAR decision."

Leicester remain third, eight points ahead of Chelsea, despite having won just one of their last five top-flight games.

They welcome Manchester City to the King Power Stadium next Saturday a point behind them having played a game more, although their Champions League hopes were strengthened by City’s two-year European ban on Friday.

“I think it’s important we improve, if we look back to last season, we had some games that we couldn’t draw and we lost at the end, the game here for example (a last-minute 4-3 defeat),” Ricardo Pereira told the club’s official website.

“It’s true that we take a point, we wanted better, we wanted to win, unfortunately we didn’t get the three points, but there’s still one point to have.

“We are in a good position, but we have to want more, we have to be ambitious, we have to keep working and getting points and be as high as possible in the table.”