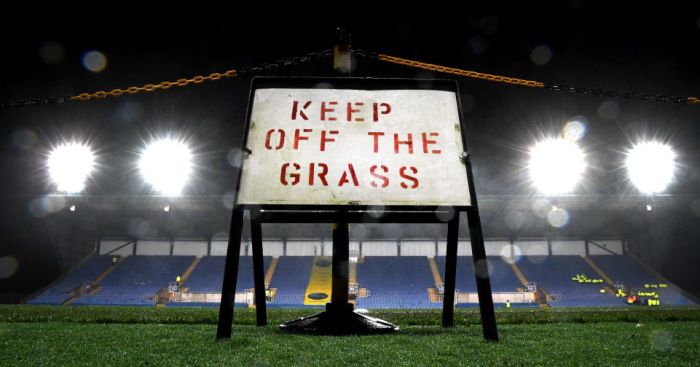 First up was the regionalisation of Leagues 1 and 2, the equivalent of a game of on-deck badminton to deal with a listing Titanic. A Football League with clubs from all points of the compass reduced to an awkward north-south divide.

Then, in a week of panicked voting to end the season, the idea of merged League 2 and National Leagues, split into north and south zones, was mooted in the Mail.

The aim to ‘boost attendances with more derbies and save travelling costs’ was front and centre, ignoring the point-defeating potential of continuing such non-local ties as Cambridge v Plymouth and Wrexham v Scunthorpe. You are essentially dismantling a brilliant national system of football for some petrol, hotel money and some half-arsed map surgery.

Regionalisation always hits Midlands clubs the hardest with the likes of Northampton Town caught between two stools and robbed of all-important local grudge matches v Cambridge if shoved in the northern pool and v Walsall if shoved in the south.

The idea of the north/south divide rests on the skewed thinking that English football fans only have an affinity for the local, which is not true in a relatively small island nation. If you want to look at dwindling away support, let’s look at unworkable ticket prices and soulless all-seater setups before we blame clubs for their geography.

North looks better until you realise no more London away days. pic.twitter.com/VnpTIpU3Gq

If travel and hotel costs are such an issue why have the FA, EFL and Premier League not put together a collective response and built accommodation hubs or done deals with hotel chains to ease the situation? Why can’t they now?

You might find that travel costs are just another convenient excuse to get stuck into the more simple job of chopping up macro-level issues into more manageable pieces instead of the more mentally taxing job of actually reinforcing what we have.

All the while, it masks the crux of the matter in that the Premier League should be fronting a rescue package from its significant reserves and TV deal and beginning to share football’s wealth down the pyramid more effectively. The Premier League’s wealth is English football’s wealth, corralled in 1992 and paid for by the TV football habit of all facets of the football family.

When there was a problem with young English talent in the Premier League, we were told we must have B-Teams in the Football League Trophy. No, just share the wealth.

Now, in response to problems with lower-league finances that pre-date Covid-19, a north/south divide is the answer. No, just share the wealth. Share it so that clubs can thrive instead of merely survive.

Of course, lower-league clubs should be run sensibly and measures such as a wage cap are long overdue (at all levels). The current situation is in part due to the EFL’s failure to properly market an infinitely marketable product and govern all its clubs into the black in their accounts.

Much of that is down to the sidelining of community ownership, making space for such whizz-kids as Steve Dale at Bury. Fan-Owned Exeter City operate on minimal debt despite having the longest trips in the country and now can look forward to non-local derbies in a north-south set-up against Stevenage.

Lower-league clubs need to be really careful about their acceptance of becoming part of a permanently second-class product, particularly with regards to future broadcast deals. Plastic pitches have also been mentioned, while the more outward-looking Premier league invests in grass pitch maintenance and values its trans-national game.

Instead of focusing on side-issue regional themes we should be looking at the pyramid in totality and funding from the top. A BBC streaming service via a football TV License distributed by law down to the the grassroots should be first up.

Otherwise, the fag packet novelty of illusory local interest ties such as Leyton Orient v Borehamwood and Crewe v Fylde could dissipate quickly, leaving us to ponder whether we made the most of what we had in the national system. Invaluable friendships built between fans north and south of Birmingham will be lost in an act of sporting self-sabotage.

48 clubs in Leagues 1 and 2, a fine example of full-time English league football. 48-0 and we fucked it up.