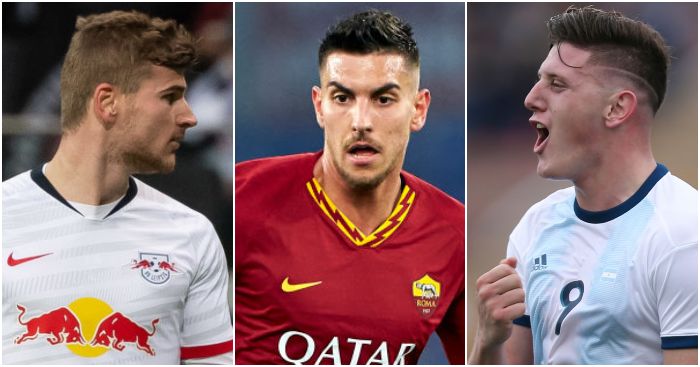 As the January transfer window stutters to a halt, here are five release clauses that your club should consider.

Timo Werner – unknown
The actual figure it would take to trigger the release clause in Timo Werner’s Leipzig contract is up for debate. The Daily Telegraph reported in December that Chelsea ‘have tried to clarify’ a fee which has been ‘quoted as low as £25.6million and as high as £51.2m in recent months’.

The only certainty is that any feasible amount would be a bargain price for a 23-year-old Germany international with at least 19 goals and seven assists in each season from 2016/17.

Liverpool have been linked alongside their Stamford Bridge-based rivals, but Werner knows his worth. His apparent response to interest from the world, European and soon to be English champions was a simple: “There is no space for me to play.”

And he does deserve not to be lounging on a bench behind Mo Salah and Sadio Mane. Werner has scored six times in 12 Champions League games and has been around for longer than you think: the youngest player to ever reach 200 Bundesliga appearances is currently a single goal behind Robert Lewandowski in his quest to unseat the Pole as Germany’s perennial top scorer.

Once anyone works out how much he would cost, the bidding war will commence. This summer will surely be his last in Saxony.

Lorenzo Pellegrini – €30m/£25.3m
“We haven’t talked about it yet, but I am very calm,” was Lorenzo Pellegrini’s response in November to reports that Roma want to extend his deal. “The only thing that matters is that I’m feeling good. When the time comes, we will sit down.

“We will also talk about removing the release clauses in the contract.”

Italian reports have been keen to stress the 23-year-old’s desire to emulate Francesco Totti and Daniele De Rossi as legendary Giallorossi. Pellegrini emerged from the Roma youth system before joining Sassuolo in 2015, but returned two years later as an Italy international and Serie A stalwart.

Pellegrini featured in their run to the 2018 Champions League semi-final and third-placed league finish that same season, before finally captaining his beloved side in a draw with Inter Milan last month. To become the capital club’s permanent skipper appeals far more than entertaining interest from Manchester United, Tottenham and further afield.

With Roma currently fourth and battling for a return to Europe’s top table, a deal already made difficult by a mutual affinity between player and club would be almost impossible in January. More than a few clubs will ask to be kept informed of the status of those contract negotiations.

Roma are about to have Cengiz Under, Nicolo Zaniolo, Justin Kluivert, Lorenzo Pellegrini, Amadou Diawara and Carles Perez in the same team.

That is one exciting team right there.

Marc Roca – €40m/£33.8m
The biggest fee Espanyol have ever generated from a player sale is neither the £6.4m received from Manchester City for Pablo Zabaleta, nor the £8m spent by Liverpool on Albert Riera in 2008. Mario Hermoso became the Catalan club’s most sizeable asset last summer when he joined Atletico Madrid for up to €29m – albeit with city rivals Real being handed roughly half the fee for their former youth player.

It seemed destined to be Marc Roca at one point. The 23-year-old (an apparent pre-requisite for consideration on this list) sparkled during a seventh-placed league finish and was courted by Bayern Munich before the Germans got cold feet, decided they weren’t looking for anything serious right now and decided not to call back.

They might come to regret that choice, with release clauses like Roca’s €40m not likely to go untouched for long. But it does rather seem as though the midfielder is content to play the field, his reputation somewhat dented by the fact he has started every game for the the side currently bottom of La Liga.

If Abelardo fails to bridge the three-point gap to safety then Los Periquitos will surely cash in on a Spanish youth international instead of clinging on. Roca assisted a goal during a wonderful performance in a 2-2 derby draw against Barcelona earlier this month and has reportedly found his way onto the radar of both them and Real Madrid. That sounds very much like the usual case of both siblings fighting over a toy neither wants to play with.

Hwang Hee-Chan – €20m- €25m/£16.9-£21.1m
There would be a degree of sympathy for Salzburg were it not for two factors. For starters, they are unbeaten in the Austrian Bundesliga since February, in a domestic cup quarter-final after winning their previous three rounds with an aggregate score of 14-1, and have returned to the Europa League knockout stages. And they consider the tag of ‘selling club’ to be a compliment.

Moanes Dabour joined for just over £4m and was sold three years later for £15.3m. Hannes Wolf cost less than £1m in July 2017 and moved on for £10m in 2019. Xavier Schlager was signed for around £400,000 in 2016 and left for £13m in 2019. And that was just last summer; Naby Keita, Sadio Mane, Duje Caleta-Car, Dayot Upamecano, Kevin Kampl and West Brom legend and Sporcle favourite Somen Tchoyi have all passed through those hallowed halls and seen their values trebled, quadrupled or more within months.

“We sell players to give them an opportunity to make the next step to a bigger club,” said sporting director Christoph Freund in December of a club that understands and has embraced its place in the football transfer food chain.

January has already seen Erling Haaland and Takumi Minamino leave for a combined £25m or so, both having release clauses activated. Hwang Hee-Chan could complete the set before the window closes.

Hwang Hee-Chan would've been the better signing from Salzburg. Can play across the front three and has the pace to run in behind. Defensively sound. Minamino is small and is better in between the lines- but can't be used in a midfield 3 consistently (not physical enough).

It was he who dumped Virgil van Dijk on his arse before scoring at Anfield in October, he who forced Kalidou Koulibaly into conceding a penalty during a Champions League draw at Napoli the following month, and he who has been largely overshadowed by his two former teammates.

Not that he has gone completely unnoticed. Brighton, Everton, Leicester and Wolves are the eclectic Premier League quartet credited with an interest in the 24-year-old South Korean, whose release clause is said to stand somewhere between £16.9m and £27m.

Adolfo Gaich – $15m/£11.5m
Everton have clearly been scouring release clauses on Football Manager, for Adolfo Gaich has apparently entered their consciousness, too. It could be the fact he has four goals in nine Superliga Argentina games, is an international at just 20, has a reported fan in Diego Maradona and has already earned himself an ADOLFO GAICH – Welcome to SL Benfica? – Skills & Goals (HD) YouTube highlights package. Or it could be that he is built like a brick sh*thouse and Goodison Park remains understandably obsessed with Denis Stracqualursi.

It would undoubtedly be a gamble. Gaich made his professional debut for San Lorenzo in August 2018 and most of his success has come at youth level, including a runners-up medal at the 2019 South American U20 Championship and a tournament victory and Golden Boot win at the Pan American Games that same year.

Club Brugge, Villarreal and Schalke have also been linked and each would be of far more benefit to a player whose development could be stunted under the fierce Premier League spotlight. In the meantime, that £11.5m fee will become more attractive with each passing week.