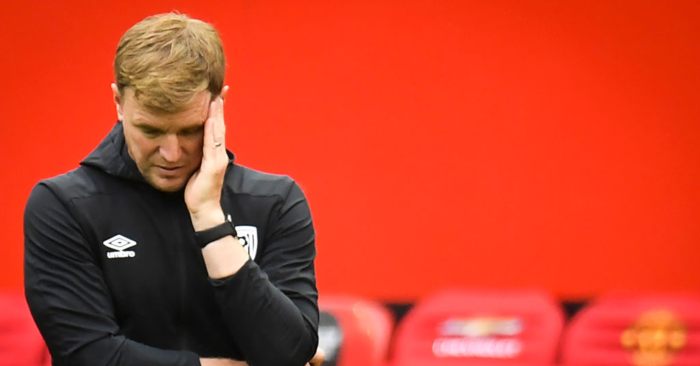 If a club ever looked relegated before it has actually been relegated it was Bournemouth on Saturday. Poor Eddie Howe might as well have it tattooed on his forehead. The gulf between his team and Manchester United’s was as wide as their relative financial clout.

It is usually at this time in every season that I write my ‘relegation is really freedom’ piece, because I see no point in clubs deathlessly clinging onto the greedy, dysfunctional marketing creation that is the Premier League and that a leap into the second tier is not down but really up into a really competitive, unpredictable and exciting league.

But even so, it is hard not to feel sorry for Eddie. He looks worn out. If this is the last chapter in his Bournemouth book, it’s been quite a story. Incredibly, he’s been in charge there since the last day of 2008, albeit with a 22-month break at Burnley.

Taking them from 21st in the fourth tier to ninth in the Premier League in 2016-2017 was remarkable. Okay, not quite Watford’s late 70s/early 80s rise from the Fourth Division to second in the first within five years – with an FA Cup final thrown in – but as near to such a fairytale as these days of financial hegemony will allow. It’s been genuinely amazing.

But in life and in football, it is the journey that we live for – not the destination – and Bournemouth, having reached the lofty peak, simply have nowhere else to go but down. All that faces them is a lot of 17th to 10th-placed finishes, an achievement in itself given the size of the club, yes, but one which inevitably begins to make fans restless and must even get demotivating for players. Their 11,364 capacity at home probably masks the decrease in interest by all but the 10,000-strong core support in a way that a 30,000 ground cannot.

They will never be able to compete financially with other top-flight clubs, despite the 130 million or so they get for being in the league, so further upward progress is blocked off.

All the league offers is money and simply existing, nothing but existing. And yet there seems little interest in competing in the cups, preferring to preserve resources for hanging on in the Premier League.

So what’s left? The occasional big club scalp is surely not enough of a sporting meal to dine on for many seasons. The journey has stopped, the destination has been reached. Now what?

Some clubs have always made up the numbers in any league, in any era, but the disparities of wealth now ensure that a smaller club cannot really hope to get established for a few seasons mid-table and then increasingly push for a top-four finish. And as Brendon Rodgers can tell you, you can live without water for many days, but you can’t live for a second without hope.

There is no pathway to sustained improvement available for a club like Bournemouth and that’s why relegation for them will be a blessing for more than most clubs, simply because there will be something to aim at again. Maybe they will drop right through the leagues, but wouldn’t it all be worth it for the rise back to the top once again? Better that than hanging around the bottom half of the Premier League probably losing 40-50% of games every season, getting knocked out of the FA Cup in the third or fourth round. Making the quarter-finals of the League Cup once or twice a decade. It’s no life at all, that. You need hope. You need to be able to hope for more, even if more never comes.

The Cherries’ plight is one faced by many smaller clubs. They do brilliantly to get promoted and have one or maybe two good seasons, finishing 7th to 10th if a couple of bigger clubs are having a meltdown, reach the ceiling of what is possible and are then left to twiddle their thumbs for a few seasons, selling their two or three best players, finding recruitment difficult and then inevitably going down.

In coming seasons this will happen to Watford, Burnley, Brighton, Palace, perhaps also to Southampton, Sheffield United, West Ham United and others yet to be promoted. It is all but inevitable. Even if Bournemouth pull out of the spiral of decline this season, it will happen sooner rather than later.

Sometimes it seems as if smaller clubs’ only role is to be there for the big clubs to play and beat, but also to win just enough for the Premier League’s advocates to keep pretending that ‘anyone can beat anyone in this league, Jeff’.

While the league ceaselessly sells itself as a privilege to play in, the feeling at kick-off that your team just has no chance is the worst feeling of all. While relegation can provoke financial collapse in terribly run clubs, those operating sensibly, like Norwich City, have no such worries. Many have found it far more rewarding than the grim days in the top flight.

Eddie Howe has done an absolutely remarkable job, and will always be a club legend, but even he must now wonder what on earth he is aiming for at the beginning of each season.

He spent all those years with the burning ambition to take such a wee club into the top flight and he achieved it. He had the drive to do that. But all that drive is now lost in just maintaining league status, no longer going forward, just hanging on. For someone with such already manifest talent, that can’t be enough, but that’s all he’ll ever have if the club stays in the Premier League.

So, yeah, for Eddie and Bournemouth, relegation really will be a new freedom. It is only by falling off the cliff edge into the void that they will learn to fly again.