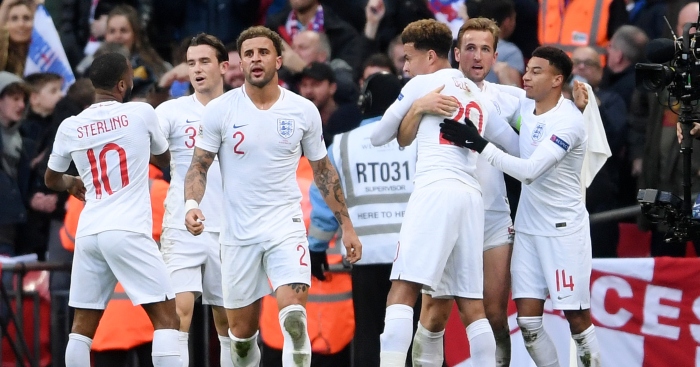 If you look at Gareth Southgate’s latest England squad and feel a little deflated that there is no Aaron Wan-Bissaka, that there is still one Kieran Trippier, that Eric Dier retains his place, that James Ward-Prowse has not been rewarded with a recall and that Fabian Delph gets the nod despite not starting a Premier League game in 2019, it’s worth remembering how far England have come in 12 months. This time last year, Southgate named a squad including Jake Livermore and Joe Hart. People are complaining about a lack of squad evolution when the revolution has already been televised.

The squad Southgate named last March – just months before an actual World Cup, remember – contained 14 players who have not been named 12 months on. Some have been ruled out by injury but other names jar (Livermore, Hart, Lewis Cook, Ryan Bertrand, Alfie Mawson) because they are now so far out of the picture that we cannot even see their shadows, while others (Jamie Vardy, Ashley Young) have been discarded on reasons of age. We now have a 25-man squad without a single outfield player over the age of 30. Better still, we now have a 25-man squad blessed with a teenager and two 20-year-olds, and Southgate could easily have named another seven or eight players who are still eligible for the England Under-21s.

The inclusion of Declan Rice will hog the headlines, but that was inevitable from the minute he switched allegiance. There are no real surprises here, and nobody should be surprised; this is basically the same England squad that beat Croatia so impressively in November, only shorn of Joe Gomez, Jesse Lingard and Harry Winks by injury, while Tom Heaton deservedly replaces the out-of-favour Alex McCarthy. Only Lewis Dunk and Brighton fans will have noticed his exclusion for James Tarkowski.

Those who accuse Southgate of favouring those players from big clubs – a favourite gripe of some who refuse to recognise that the best players do tend to play for the biggest clubs – might want to note that there is still no place for the Manchester United defender who played excellently in a Champions League last-16 tie last week. He might have prevented Kylian Mbappe from scoring in Paris, but Chris Smalling still cannot muscle his way past a Burnley centre-half for England. We have to admire such bloody-mindedness from the England coach.

Here it is – the #ThreeLions' squad for our opening two #Euro2020 qualifiers:https://t.co/3seiPqsZrO

Wan-Bissaka is perhaps the unluckiest of those not named – and you will find no argument here about him being in better form than Trippier – but in an Under-21 tournament year, it perhaps makes more sense for him to play at that level than be third-choice right-back for the senior side. Little over a year after his Premier League debut, there really is no rush. England might need the directness of Jadon Sancho right now, but we should not need Wan-Bissaka’s supreme tackling against the Czech Republic and Montenegro. He – and we – can wait.

Southgate is not only eyeing a summer Nations League victory but also a first Under-21 European Championship win in 35 years. With the depth of talent at his disposal, he should not need to sacrifice one for the other. We really have become complacent about this England revolution if we are complaining that a squad with an average outfield age of under 25 is a little bit too staid.