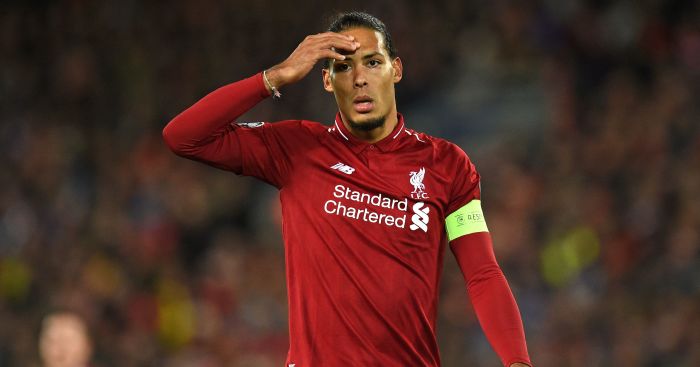 Mind the gap
Liverpool face Manchester City on Thursday evening in a game that will go some way to deciding the destination of the Premier League title. It will be bloody brilliant.

The Sun‘s back page suggests that Pep Guardiola has ‘started the title mind games’ by pointing out that 29 years is a long time not to win a title. Fergie would be proud.

The Daily Mirror website says City and Liverpool ‘continued mind-games’ – not ‘started’? – by ‘heaping praise on each other’. Because they can’t possibly have just been, y’know, praising each other.

But our favourite description of what were two pretty ordinary press conference quotes come from the MailOnline, who enjoyed ‘a war of compliments’ between the two managers.

Football journalism can be so weird.

Ash Thursday
Elsewhere, in The Sun, Neil Ashton is getting a little giddy.

Of City, who have only dropped 13 points all season, he writes:

‘There are question marks about the desire of this side, the motivation to successfully defend the Premier League title.’

And of Liverpool, he adds:

‘They are getting excitable on Merseyside, convinced that the 29-year wait for the title is almost over thanks to Klopp.’

And there Mediawatch was, thinking City would quite like to win the Premier League again, and that most Liverpool supporters are reserving celebrations with literally 18 games remaining. Silly us.

‘Recent history is with them. The night they shook the Kop in last season’s Champions League quarter-final and the stirring 2-1 victory at the Etihad in the return leg are in their favour.

‘The 5-0, when City ripped apart Liverpool’s defence in September 2017, is a distant memory.

‘Notably, that scoreline was also prior to the arrival of the Dutch colossus, Virgil van Dijk.’

Ah yes, the Dutch colossus. That giant fella at the back. The one Troy Deeney says smells great. Good, isn’t he?

‘At £75million, Van Dijk is starting to feel like a snip. He has made the difference, an authority in the centre of a Liverpool defence that has conceded just eight times in the league.’

He certainly has. Which makes it all the funnier that you said Liverpool ‘blew their brains out to sign the Dutchman’ just over a year ago.

‘He is not even the best defender in the Premier League,’ Ashton added in an article written on December 28, 2017. ‘Toby Alderweireld, in the middle of messy contract negotiations at Spurs, will be the biggest beneficiary of this mind-boggling move.’

And Ashton was also at pains to point out that City had rejected Van Dijk.

‘They already have an injury-prone central defender, with Vincent Kompany out again.

‘City, with money to spend to strengthen the squad in January, do not need another crock.

‘Van Dijk, who has struggled for fitness and form during the past year, was not considered good value at £75m.’

At least Van Dijk ‘is starting to feel like a snip’ now; a long time has passed since Liverpool ‘blew their brains out’ to sign ‘another crock’.

Liverpool have been beaten by ‘four or five’ goals once since the start of the 2015/16 season. We would probably all be a little surprised if it happened here.

Reade all about it
There are plenty who sensibly suggest the title will not be won or lost on Thursday evening. Brian Reade of the Daily Mirror counts himself among that group.

‘English top-flight titles are never won when the Christmas decorations are still up,’ he writes.

Mind you, Reade also said that City had managed to ‘make a mockery of “the most competitive league in the world” cliché’  in December 2017. They were 15 points ahead after 20 games then; the Christmas decorations were certainly still up, and the league was certainly pretty much won.

What was that goal against Bournemouth for, then?

Unnecessary capitalisation of the day

Wait until they discover Raheem Sterling turning up for Manchester City 10 HOURS *after* the game too. Like it’s his bloody job or something.