Home Mediawatch A reminder: Manchester United are still in fifth 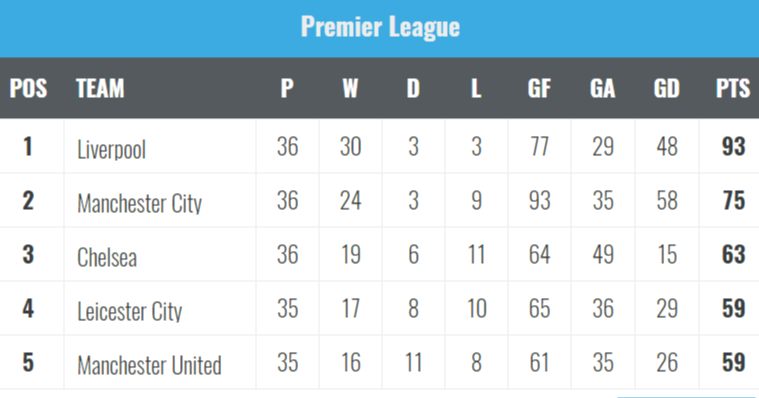 We feel we need to remind you that Manchester United are fifth, because apparently they are about to win the title…

Pog days are (not) over
How fitting that Neil Custis has the pleasure of exclusively announcing that ‘PAUL POGBA is close to agreeing a new five-year Manchester United deal’.

After all, we are rapidly approaching the two-year anniversary of Custis telling us ‘this is the beginning of the end for Paul Pogba at Manchester United’.

And we are pretty much bang on the one-year anniversary of him saying: “Paul Pogba will go down as the most disliked Manchester United player of all time.”

That didn’t quite happen so in January: ‘PAUL POGBA’S Manchester United career is over with both player and club desperate for a parting of the ways.’

And then again in January: ‘MANCHESTER UNITED will let Paul Pogba leave in a cut-price deal this summer after finally signing Bruno Fernandes.’

And in February: ‘PAUL POGBA has been given the green light to leave Manchester United.’

And then in March: ‘PAUL POGBA’S Manchester United career is over. Despite suggestions that a peace deal is being made, both sides want a splitting of the ways.’

In July that all rather feels like wishful thinking on the part of Mr Neil Custis.

Preferential treatment
Express website, February 13: ‘Manchester United are now firm favourites to complete a transfer for Jadon Sancho with the Borussia Dortmund winger preferring a move to Old Trafford over Chelsea and Real Madrid despite their ongoing struggles under Ole Gunnar Solskjaer.’

Express website, April 10: ‘Borussia Dortmund winger Jadon Sancho reportedly prefers a move to Manchester United over Chelsea and Liverpool because of his budding friendship with Marcus Rashford at international level.’

Express website, May 7: ‘Jadon Sancho wants a move to London this summer, despite reports suggesting the striker is close to signing for Manchester United.’

Express website, June 6: ‘Manchester United could be forced to look at other transfer targets aside from Jadon Sancho, as the Borussia Dortmund ace would reportedly prefer a move to Liverpool if the Reds come knocking.’

We would reportedly prefer the Express – and others – to admit that they haven’t got a clue.

NBU
Over at the Manchester Evening News, we learn that ‘Willian could save Manchester United millions on Jadon Sancho transfer’. Isn’t that nice?

‘His Dortmund contract is set to expire in the summer of 2022 and he’s unlikely to pen fresh terms as he seeks to return to England. The longer Dortmund go without cashing in on their star forward, the cheaper he becomes for United to sign.

‘In January or next summer, United will be in a much stronger position to thrash out a deal for the England international, especially considering match day revenues may have returned and the financial climate will be much clearer.

‘In the meantime, Willian can provide the answer at a fraction of the cost.’

It sounds perfect. If you entirely discount that other teams – potentially better teams – might quite like to sign Jadon Sancho. This might come as something of a shock to the propaganda machine of the MEN, but other football clubs are available too.

Level 23
Elsewhere on the MEN, a headline that entirely baffles Mediawatch:

Manchester United are currently fifth so it seems unlikely that this particularly side can go ‘one better’ than anything Sir Alex Ferguson managed at the club, so we will read on…

‘Manchester United are unbeaten in 18 and the last time such a run extended to 19 games in a season was in 2010-11 with the ‘Unconvincibles’ side that somehow won the league by nine points, reached a Champions League final and the FA Cup semi-finals.

‘United actually avoided defeat in their first 23 matches that campaign until the League Cup aberration at Upton Park.’

Ah, so what Manchester United can actually do at Crystal Palace is ‘go four short of Sir Alex Ferguson’. Not a great headline, but at least it’s true. Which we are increasingly realising is no longer really a consideration.

Striker light
The Daily Mirror hit pay-dirt with their ‘Anthony Martial’s Ole Gunnar Solskjaer comments suggest Jose Mourinho has lost his touch’ headline, because of course Manchester United are now fifth and Martial is now brilliant so basically Mourinho was a fool for ever questioning that the Frenchman was a striker.

‘Unlike his predecessor, Solskjaer has always seen Martial as a striker and putting faith in him has paid off.’

Always? Five of his nine Premier League starts last season under Solskjaer was on the left wing. He was actually on the bench more often than he started as a striker.

‘He handed Martial the No.9 shirt last summer and has given him the responsibility of leading the line.’

Cynics might suggest that he literally had no other strikers.

Fool me once…
Clearly, the Mirror have decided that there’s clicks in former Manchester United managers being made to look foolish by the club sitting in fifth with the capacity to finish on a points total (68) bettered by both managers, so…

Yes, he looks like a right d*ck for what he said last April when Ole Gunnar Solskjaer’s Manchester United really were shit.

Reality show
‘Manchester United are a year away from being serious challengers for the Premier League title,’ begins Mark Ogden on ESPN.

‘That’s not an opinion based on the progress made by manager Ole Gunnar Solskjaer with his squad in recent months, but a reality borne out by the numbers that tell you when a team is ready to become champions.’

A ‘reality’? That is a really big call.

He then goes down a big old rabbit-hole about age…

‘Solskjaer has named the same starting XI for each of United’s last five games — injury to Luke Shaw ensures that run is likely to end at Crystal Palace on Thursday — and its average age is 24.9 years. At 31, midfielder Nemanja Matic is the oldest member of that side, with Greenwood the youngest. What history shows us is that an average of 24.9 years is not quite old enough for a title-winning team, but isn’t far off.’

We might suggest that age is not the only factor in whether a team becomes champions but Ogden is not to be put off. He keeps on his chosen road, via Alan Hansen, the class of 92, Arsenal’s Invincibles, Manchester City’s centurions and this Liverpool side to here…

‘History suggests that title-winning teams enter a season with an average age of between 25.5 and 26.5 and Solskjaer’s side will be in that area at the start of the 2021-22 season rather than the 2020-21 campaign, which is expected to begin in mid-September.’

It’s an excellent theory and is why Newcastle, Brighton, Leicester, Norwich, Arsenal, Southampton, Everton, Aston Villa and Chelsea are all competing for the title alongside Liverpool this season.

And of course we all remember an age-appropriate Manchester United themselves competing for the title in 2018/19, when they finished *checks notes* one place below where they are now.

Football365 shithouse headline of the day
‘Mourinho rants after Spurs selection query: ‘Why not Lampard or Klopp?’

Now Jose Mourinho could take a dump and it be described as mind games or a siege mentality, but that relatively fair point was far from a ‘rant’. Naughty.

Recommended reading of the day
Jonathan Liew on Arsenal