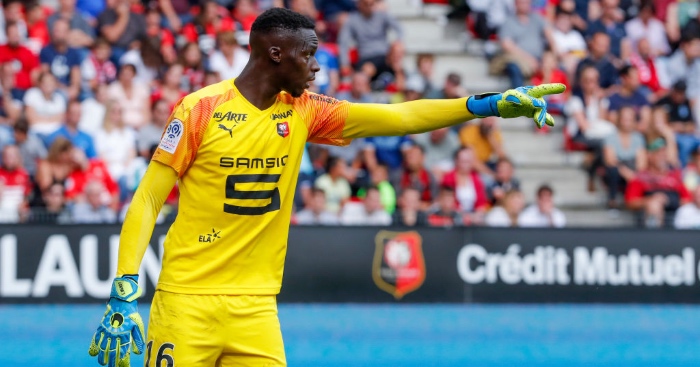 Chelsea’s £22million signing of Senegal goalkeeper Edouard Mendy continues a rich history of Rennes players moving to the top flight of English football. Let’s take a look back at some imports from Brittany who excelled, and others who have failed to deliver, on the Premier League stage…

A transfer that mirrors Mendy’s in many ways, Cech was signed in July 2004 by newly-appointed Chelsea manager Jose Mourinho. With a fee understood to be in the region of £7million, his transfer was part of a larger recruitment drive which saw the west London side bring in talent from across Europe. This included players like Mateja Kežman, Didier Drogba, Arjen Robben, Ricardo Carvalho, Alex, Paulo Ferreira and Tiago.

Chelsea were not Cech’s only suitors at the time, with Real Madrid and Inter Milan both keen on a move for the Czech Republic international. Indeed Chelsea had an undisclosed bid for the stopper rejected in January 2004, before finally landing their man six months later.

The shrewdness of Cech’s signing is ultimately reflected in the accomplishments of a man who, over a glittering career, became one of the iconic Premier League goalkeepers.

In what was their first season back in the top flight after a six-year absence, Norwich finished the 2011/2012 season a respectable 12th place in the table. New Canaries manager Chris Hughton was keen to bolster his squad and the Norwich hierarchy duly obliged, signing the likes of Robert Snodgrass, Sebastien Bassong, Michael Turner and a 19-year-old Harry Kane on loan.

Tettey, a combative defensive midfielder who remains a key figure at Norwich to this day, took well to the physicality of the Premier League, making his full home debut in a shock 1-0 win over title hopefuls Arsenal. He would go on to make over 100 Premier League appearances for the club, with more than 240 appearances for Norwich in all competitions over the past eight years.

A selfless type who doesn’t mind the hard yards, he’ll mostly be remembered for this stunning strike against Sunderland back in 2014.

A product of the same Rennes academy that brought us Ousmane Dembélé, Sylvain Wiltord and Mikaël Silvestre, Everton’s new man was brought to the Premier League by Watford back in February 2016. He was immediately loaned out to fellow Pozzo family-owned club, Granada, for the rest of the 2015/2016 season, before making his Premier League debut for Watford in August 2016.

Doucoure, who was one of Watford’s outstanding performers in their 2019-2020 relegation season, has racked up over 130 Premier League appearances, including 17 goals and 11 assists, over the past four years.

A player of his calibre never seemed likely to spend a season in the Championship – so Everton’s £20million deal to sign him this summer won’t have come as a shock to many. For a goalscoring midfielder, with his proven Premier League track record, that fee may just turn out to be one of the bargains of the season.

Ghana intentional Asamoah Gyan joined Sunderland in August 2010 in a club record £13million deal. He enjoyed a fruitful first season in the Premier League, notching 10 goals in 34 appearances, but the lure of a bumper wage packet saw him shipped out on loan to Abu Dhabi side Al Ain. Gyan, who signed permanently in July 2012, has since remarked: “Sometimes I feel that I left early but maybe that’s what fate had in store for me.”

West Brom’s Kamil Grosicki arrived in the Premier League via Rennes mid-way through Hull City’s doomed 2016-2017 season. A pacey winger with a few of tricks in his locker, he injected some much needed gumption into the side. It was perhaps somewhat surprising then when he remained at Hull despite their relegation, but now finds himself back in the Premier League again with his new side.

While Liverpool have reportedly ended their interest in Watford’s Ismaïla Sarr, the 22 year-old Senegalese international, who has also been linked to Aston Villa of late, will remain on the radar of top sides around Europe. Signed by Watford on a five-year contract in August 2019, for a club-record fee believed to be worth £40million, Sarr enjoyed a productive season last term – contributing five goals and four assists across 28 Premier League appearances.

Read: Can Mendy break the Lampard keeper jinx at Chelsea?

Part of Harry Redknapp’s Portsmouth revolution of the mid 2000s, John ‘The Torpedo’ Utaka arrived in the Premier League on the back of two reasonably successful seasons in Ligue 1.

The Nigerian international, who commanded a reported £7m fee, is often seen as one of the poster boys for the club’s well-documented financial demise. Utaka was followed through the door at Fratton Park in the summer of 2007 by big names such as Sulley Muntari, Jermain Defoe, Lassana Diarra and David Nugent.

If you can’t find many of his goals online, it’s because they simply aren’t there. With a goals per game ratio of 0.17, you’re likely to find his inclusion on most ‘Premier League’s worst strikers’ lists, but he did have a few moments of glory, most notably laying on the ball for Nwankwo Kanu to score the winning goal in the 2009 FA Cup Final.

Following Pompey’s relegation to the Championship in 2010 Utaka endured half a season in the Championship, before leaving the south coast for French side Montpelier in January 2011. A player who certainly had the athletic ability to cope with the pace of the Premier League, but perhaps lacked the necessary finesse to reap the rewards.

The Newcastle fan that I am can’t help but squirm a little when I hear this lad’s name. Another one of scouting wizard Graham Carr’s French finds, Marveaux arrived on Tyneside in a five-year deal, at the peak of Newcastle’s French revolution.

Newcastle fans look back at that summer of 2011 as one of the most optimism-filled they have ever experienced. The French experiment had already been tested the previous season, with the signing of the electric Hatem Ben Arfa and Ivory Coast international Cheick Tiote (RIP), and the board were ready to take the plunge with both feet.

Marveaux was joined that summer a number of by promising imports, including the stylish midfielder Yohan Cabaye, and the new strike partners Demba Ba and Papiss Cisse. While the others excelled and, with the exception of Cisse, went on to bigger clubs, Marveaux never really got going in the black and white.

A tidy and diminutive attacking midfielder, he seemingly lacked the physicality required at the top level. Coupled with a perceived lack of desire, he failed to woo the Toon faithful and only managed a paltry goal and five assists over four seasons at St James’ Park.

At the end of the 2015/2016 season he, along with fellow flop Gabriel Obertan, had his contract terminated by mutual consent, and he was picked up on a free by Lorient. In a 2017 interview the Frenchman said of his time on Tyneside, “I had a nice contract, but I did not enjoy it there.” None of us enjoyed it, Monsieur Marveaux.

You may be thinking; how can a goalkeeper who has over 130 caps for Sweden be a miss? Well, I debated long and hard whether to include Man City’s Isaksson, but on the merits of his record at the club, I couldn’t help but do so.

After a reasonably successful World Cup in 2006, Isaksson was bought by manager Stuart Pearce in August for a fee of £2m. Pearce was sacked in May 2007, two months before Thai businessman Thaksin Shinawatra bought the club and immediately installed Sven-Goran Eriksson at the helm.

Despite having a fellow countryman at the wheel, Isaksson found his opportunities at City limited. This was due in large part to the form of the resurgent Nicky Weaver during the 2006/2007 season, and the emergence of Joe Hart in the season that followed.

When he did get his chance, the stats did not make for pleasant reading. The Swede conceded an average of 1.65 goals per 90 minutes during his time in the Premier League. That’s a similar average to recently-relegated goalkeepers Aaron Ramsdale and Ben Foster (both 1.68 per 90).

He won’t be remembered as one of the signings that laid the future foundations for success at City, but, on his day he was a very capable shot-stopper. Undoubtedly he will be remembered for as the keeper on the end of City’s humiliating 8-1 last-day drubbing at the hands of Middlesbrough in 2008. Isaksson actually played quite well on the day, and could do very little about most, if not all the goals. In any case, it was surely a career low-point for the Swede.

It cannot be understated that Isaksson, who moved on to PSV and did very well there, was a quality keeper on his day. In an effort to spare the big-man’s blushes, check out this impressive display of athleticism during a 2013 friendly match against Lionel Messi’s Argentina.

Ola Toivonen arrived at the Stadium of Light in August 2015 on a season-long loan. It was hoped the Swede would provide the ammunition for strikers Jermain Defoe, Fabio Borini and Dame N’Doye, but they didn’t really click. He made just 12 appearances for the Black Cats, providing two assists and failing to score a goal. Despite Toivonen’s misfiring Sunderland would narrowly avoid relegation, at the expense of local rivals Newcastle. I am not still salty about that one. Honestly.

With a name you’d expect to find in the pages of an Alexandre Dumas novel, Jean-Claude Darcheville spent the 1998-1999 season on loan at Nottingham Forest. He only managed 16 appearances and two goals during his time at the City Ground, with Forest relegated that season. A large part of the reason Darcheville failed to settle in England was due to the death of his wife and children in a car accident just before his move.

Arnold Mvuemba is a name only Portsmouth fans will remember. The DR Congo international joined Pompey for £1.7m in 2007, but failed to live up to the early promise he had shown, having moved to the south-coast on an initial loan deal. The midfielder made 21 Premier League appearances over two seasons at Fratton Park without registering a single assist.