Home All The News Replacing Wenger: How the Arsenal shortlist shapes up 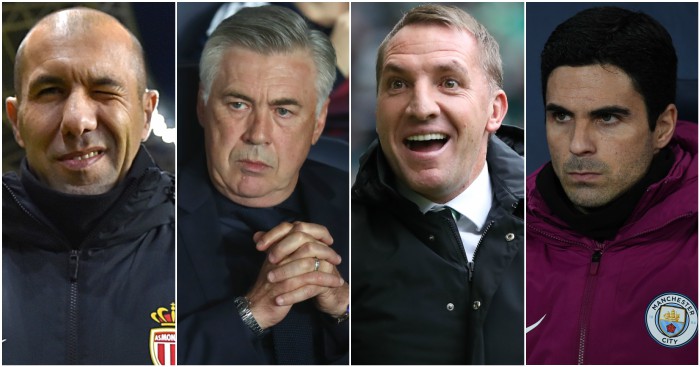 With the pressure cranking up again on Arsene Wenger, attention once more turns to the issue of who will replace the Frenchman as Arsenal boss when he finally leaves. According to the morning’s papers, the Gunners have drawn up a shortlist featuring seven names, with varying degrees of experience. How do they measure up?

The Venezuelan-born coach never played professionally but that hasn’t stopped him progressing up the coaching ladder to Monaco, where he produced one of the most exciting teams in Europe last season, featuring the likes of Kylian Mbappe, Thomas Lemar, Benjamin Mendy and Tiemoue Bakayoko (when he was good). They beat PSG to the Ligue Un title while reaching the Champions League semi-finals and though Jardim signed a new contract at Monaco last summer until 2020, the 43-year-old did not rule out the possibility of moving on when he was asked about the Arsenal position towards the end of last season. He has previous with Wenger too, accusing the Gunners boss of being disrespectful after Monaco knocked the north London side out of the Champions League in 2015.

The Germany boss has the small matter of defending his nation’s World Cup crown this summer, and that would make a handover of power potentially tricky given the 58-year-old would likely miss a chunk of pre-season and he could not be seen to be making any preparations for next season prior to that. Low is under contract with the DFB until 2020, but Real Madrid are also said to be keen to bring the coach back to club football after 14 years in total with Die Mannschaft, the first two being spent as Jurgen Klinsmann’s assistant.

The Northern Irishman has made it clear that he is happy with Celtic – he has a contract until 2021 – but Rodgers may be tempted by the Arsenal job, given there is little else to achieve in Scotland. The 45-year-old won the domestic Treble in his first season, during which the Hoops remained unbeaten outside of Europe. Rodgers, though, has unfinished business in the Premier League following the manner of his Liverpool sacking, which came just over a year after he almost guided the Reds to their first domestic title since 1990.

The Italian, who currently has his feet up after leaving Bayern Munich in October, is by far the most experienced name on the shortlist, having won three European Cups and domestic titles in four different countries. Despite his roll of honour, the 58-year-old has proven to be willing to work as a head coach rather than a manager, with Ancelotti having worked under some of the most notorious presidents and owners. Success was achieved under Roman Abramovich, Silvio Berlusconi and Florentino Perez. As amiable as Ancelotti has proven to be, though, do Arsenal not need someone who might shake things up a bit more?

The Spaniard has a personal link with Arsenal, having spent five seasons at the Emirates as a player. The Gunners were his final club before he made his first step into coaching by joining Pep Guardiola’s backroom team at Manchester City as joint assistant coach. The 35-year-old has sat beside Guardiola for just over a season and a half and though Arsenal were reported at the end of last year to be looking upon Arteta as a future manager, surely the rebuilding job at his former club is too big to be trusted with a rookie boss.

Similar to Arteta, Arsenal’s all-time record scorer has a deep connection with the club but in terms of managerial experience, he is even more wet behind the ears than his former team-mate. Henry’s only coaching experience is 16 games sat alongside Belgium coach Roberto Martinez, but that hasn’t stopped him from expressing an interest in replacing Wenger: “Listen, I still have a job to do with Belgium, but it will be a dream for me. Interested? Yes. Who wouldn’t be?” he said this weekend. Ian Wright, though, believes Henry and Arsenal should ignore the lure of a sentimental return.

The Portuguese former centre-half has been attracting interest from the Premier League due to his work with Shakhtar, who are one of the three sides to have beaten Manchester City this season. Everton were reportedly keen on the 44-year-old to replace Ronald Koeman but Shakhtar refused to entertain the Toffees’ approach. But Fonseca may push harder if Arsenal’s interest is firmed up, with the ex-Porto coach having expressed his desire to work in England: “All coaches want to go to England and I am one,” he told the Telegraph in October. “I have this dream and I believe this can happen. If it’s soon or not, I have this dream.” Fonseca is also out of contract at the end of the season.