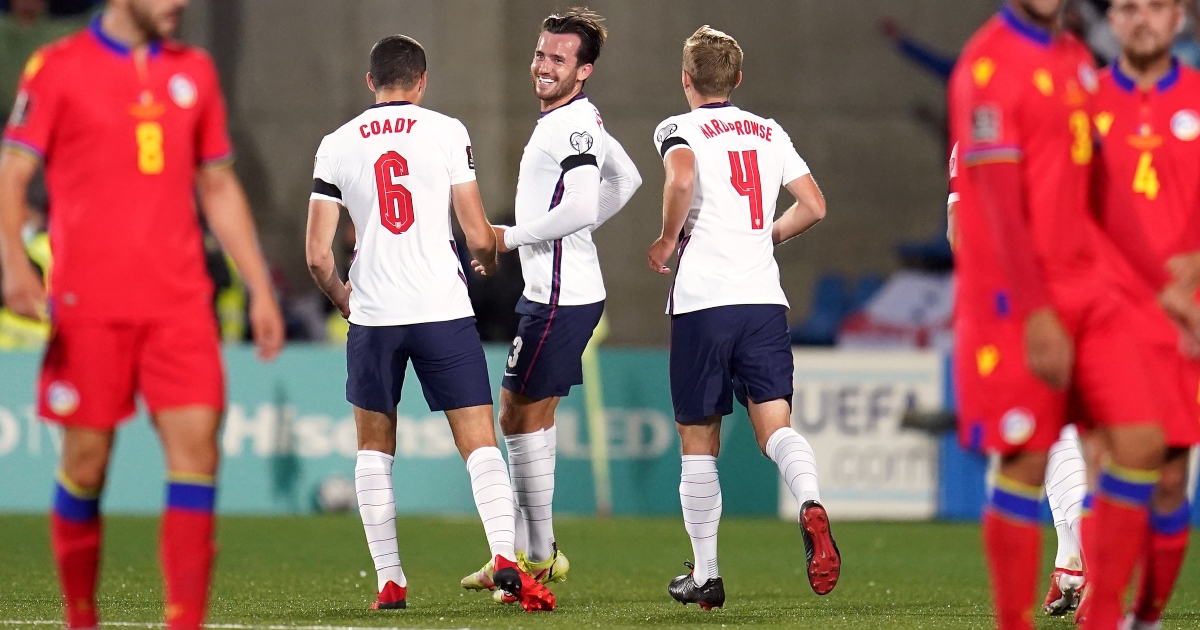 England moved another step closer to World Cup qualification as Gareth Southgate marked five years in the dugout with a predictably comfortable victory against minnows Andorra.

After coronavirus vaccination rates within the squad dominated the build-up, attention turned to matters on the field as the Three Lions’ unbeaten road to Qatar continued deep in the Pyrenees.

Ben Chilwell and Bukayo Saka put England in cruise control at the break against the side ranked 156th in the world, with Tammy Abraham, James Ward-Prowse and Jack Grealish wrapping up a 5-0 triumph.

Just 2,285 were in attendance at the Estadi Nacional, where the hosts worked feverishly overnight to repair the damage caused by the spectacular touchline fire around the TV gantry area on the eve of the game.

The blaze took place shortly after Southgate faced the media, speaking on the fifth anniversary of his first match against Malta about matters as varied as Andorra’s artificial pitch, vaccines and an important occasion for gender equality.

Saturday’s Group I match saw Ukraine’s Kateryna Monzul become the first women to referee a senior England men’s match – a historic moment in what was always going to be a Pyrenees cakewalk.

Phil Foden was the architect of both first-half goals, providing the killer ball for Chilwell’s first international goal – awarded after the VAR overruled an initial offside call – and then Saka’s thumping strike.

Abraham, making his first international start in four years, turned home a Jadon Sancho cross in the second half, with Ward-Prowse taking a late penalty off him and striking home after his initial effort was saved.

England fans outnumbered locals at the Estadi Nacional after being given the green light to travel for the first time since the trip to Kosovo in November 2019.

Chilwell was the only survivor from the side that started that night and put a difficult few months behind him when striking home in the 17th minute.

Foden took possession 30 yards out and his clipped ball put Sancho behind, with the winger drawing out goalkeeper Josep Gomes before cutting back for the left-back to slam home.

The goal was initially ruled out for offside but a lengthy VAR review led the decision to be overturned as Chilwell celebrated his first England goal.

Abraham was denied from close range as the Three Lions pushed for the inevitable second against Andorra, who were forced to bring on 41-year-old Ildefons Lima on the half-hour mark.

John Stones and Cristian Martinez were handed the first bookings of the evening as tensions frayed before the break, with Sancho soon joining them in Monzul’s notebook.

The winger, who showed some superb skill at times, was furious with an unpunished Chus Rubio challenge on him just before the break, with the winger letting the Andorran know as they left for the break.

Sancho saw an effort denied, Jesse Lingard headed off target and Abraham lifted over as England continued in the ascendancy after the break.

They pulled further ahead in the 59th minute when Sancho whipped over a right-footed cross from the left and Roma striker Abraham stabbed home.

Fikayo Tomori came on for his second England cap in place of Stones shortly afterwards, with Andorra lucky not be reduced to 10 men after booked Marc Rebes clattered into Conor Coady.

The hosts tired as the match wound down and the Three Lions’ continued attacks brought more goals.

Substitute Grealish was brought down in the box by Rubio, with Ward-Prowse taking the ball after a discussion with Abraham and firing home the rebound after his penalty was saved by Gomes.

Another goal came in the 86th minute as Grealish finally opened his international account, striking low beyond Gomes after collecting a long throw from goalkeeper Sam Johnstone.

A late tackle prevented Ollie Watkins adding a sixth on a night when England kept a national record 12th clean sheet in a calendar year.